Introduction: Surgical site infections (SSI) constitute a major public health problem worldwide and are the second most frequently reported nosocomial infections. They are responsible for increasing the treatment cost, readmission, length of hospital stay and significant morbidity and mortality. The present study was aimed to determine the incidence of SSIs and the prevalence of aerobic bacterial pathogens involved with their antibiogram at our tertiary care hospital.

Materials and Methods: This study was conducted for a period of one year (January to December 2019). The SSI occurrence, the organisms isolated, antibiotic sensitivity pattern as well as outcome of the treatment is evaluated.

Results: In overall surgeries conducted in a year at our institute, we found 15 cases from various department were clinically diagnosed of having SSIs, including 11 male and 4 females with the mean age of 43.7 years. Out of the total 15 samples processed, 9 (60%) yielded bacterial growth including Staphylcoccus species, Enteroccous, Pseudomonas and Acinetobacter species. Most of these are organisms isolated were not multidrug resistant.

Discussion: Management of SSIs remains a significant concern for surgeons and physicians in a health care facility, which carries a load with high morbidity and mortality. Due to the proper hospital infection control management we report the occurrence of low SSI in our hospital with the absence of multidrug resistance. We emphasis the importance of hospital infection control monitoring with proper precautions during surgeries to reduce the load of SSI and better outcome of the treatment.

Surgical Site infections (SSI) is considered as a significant problem in clinical aspects associated with the high morbidity and mortality. It has been associated with greater economic burden, prolonged hospitalization and high mortality rate.1 CDC clearly defined SSI as an infection that occurs after surgery in the part of the body where the surgery took place and classified the SSI into superficial, deep and organ specific.1 The wide range of incidence and prevalence of SSI has been noted in United States and it is the most common complication occurring in 2-5% of post-surgery cases.2 The pathogenesis of SSI has been associated both with the endogenous contamination such as skin flora and exogenous contamination by healthcare personnel or contaminated surgical instruments. Other factors such as burden of organism and virulence factors of pathogens also play a major role in occurrence of SSI.3 The risk factors associated with the SSI were classified as intrinsic associated with age, obesity, nutrition, preoperative hospitalization. The perioperative factors such as preparation of patient, hair removal, skin preparation, antimicrobial prophylaxis and duration of surgery impact the outcome of surgery and ill preparation favours the SSI.3

This prospective study was done in the Department of Microbiology, Kamineni Academy of Medical Sciences and Research Centre, Hyderabad. The study period was from January 2019 to December 2019. The patient details were recorded including type of surgery, type of wound infection, wound class including clean, clean contaminated and contaminated wound and total days of stay in the hospital.(Table 1) (Figure 1) 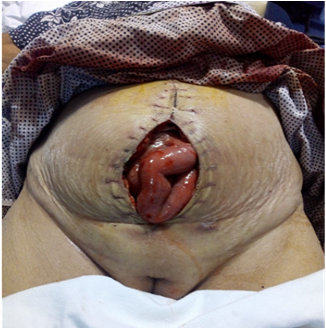 All the patients admitted from different surgical wards of the hospitals during the tenure of study period for elective or emergency surgeries associated with clean, clean contaminated and contaminated were included.

The demographic data, associated comorbidities, risk factors, duration of surgery and clinical evaluation of wound were collected and analysed.

Details of type of surgery, type of wound, hospital stay and type of specimen collected

All the samples were cultured on blood agar, MacConkey Agar media and Chromogenic agar media, and culture plates were incubated at 37◦C overnight, the identification of culture and sensitivity to various antibiotics was carried out using VITEK-2 system.

In this period in our hospital a total number of 1613 surgeries were carried out, in which orthopaedic surgeries accounted for 632, gynaecology department accounted for 436 surgeries, surgery department 416 and 129 surgeries were carried out in Neurosurgery department. The patients were examined preoperatively, intra-operatively and post operatively. Out of 1613 cases the present study found the occurrence of 15 cases (0.92%) developed SSI (Figure 2). The patients included 11 males 4 females, the age of the patients were in a range of 17 years to 70 years. 5 patients were in age group 17-34, 5 patients in age group of 35-51, and 5 patients in an age group of 52-70 years with mean age of 43.7 years. The duration of the surgery lasting less than 2 hours has been noticed in 13 cases and in remaining two cases the duration of surgery was more than 2 hours. Few cases are with the comorbidities such as 3 hypertension cases, 1 case of chronic kidney disease, 1 case of coronary artery disease and 1 case has been admitted with road traffic accident. The cases taken up for the surgery were included as elective in 10 cases, and 5 cases were taken up on emergency basis (Figure 3). 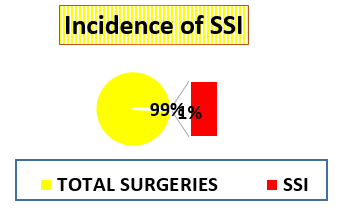 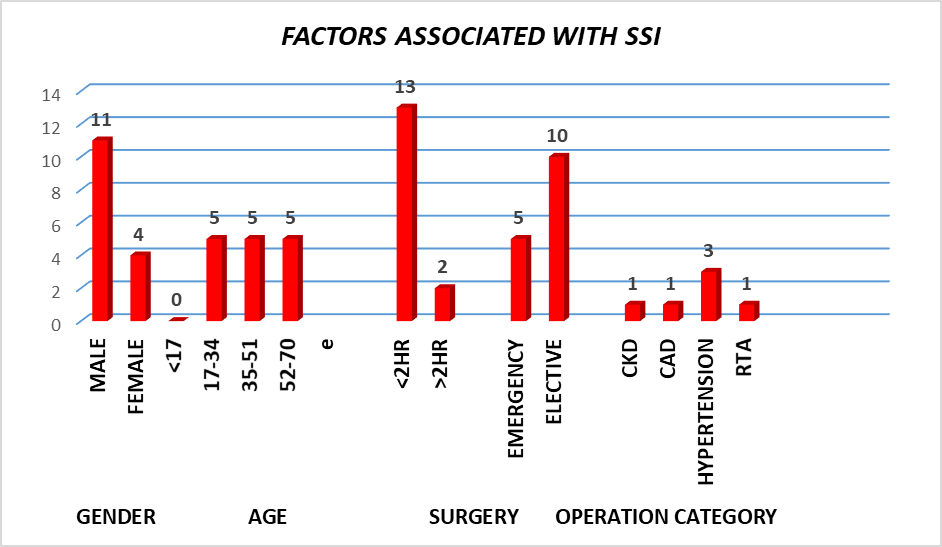 The spectrum of bacterial isolated from SSI cases 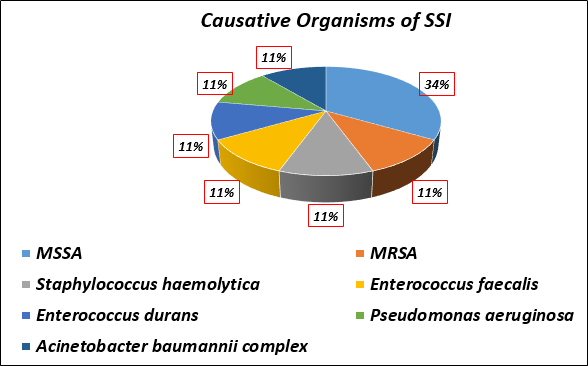 A: Staphylococcus aureus on blood agar, B: Pseudomonas aeroginosa on CPSE agar

Several studies all over the world has reported surgical site infection as one of the causative agent for the long stay in hospital, leading to spread of bacterial drug resistance as well as the psychological and monetary effect on the patients. The overall infection rate in the present study was less than 1%, a very less occurrence of SSI compared to the other studies which reported rates ranging from 2.5 to 41.9%.9, 10 In the present study we report the occurrence of SSI at very low percentage which emphasize the continuity of strict adherence of standard operating procedure and effective work of hospital infection control committee. In the present study the overall average stay in the hospital on average was 13.6 days (min-5 days- max-50 days). Similar to other studies the present study also found the most common bacterial isolates were Staphylococcus species with varying antibiotic sensitivity pattern.2 Contrast to a study conducted by Lilani et al., which found occurrence of more gram negative bacteria isolated from clean-contaminated wounds, the present study isolated a single Pseudomonas aeroginosa and a single Acinetobacter baumannii complex.11

The present study also emphasize the importance of duration of surgery. Emergency surgery is one of the key factors, and have more than 50% risk of developing SSI compared to elective procedures,12 the present study also support and shown the 100% bacterial growth in SSI cases taken up on emergency basis. Comorbidities including hypertension, CKD and CAD also play a major and independent risk factors in SSI. A study from Mejía et al. has found the patients with comorbidities acts as risk factors favouring SSI and our results echo with similar results where we found 100% growth in SSI in cases having comorbidities as a one of the important factor.13 Age is one of the factors, which might increase the chances of having SSI. A cohort study conducted by Kaye et al has found that age is an independent factor which favours the occurrence of SSI, similar to our results which found high occurrence of culture positive cases in patients with age ranging from 52-70 compared to lower age group.14

The present study has found low SSI cases along with the organisms which were sensitive to most of the antibiotics except for Acinetobacter baumannii complex. The organisms were found sensitive to the several classes of antibiotics such as macrolides, cephalosporin’s, beta lactamases, aminoglycosides, glycopeptides and carbapenems. This study also emphasise the importance of isolation of newer organisms in relation with the SSI. We first time report to our knowledge- the isolation of Staphylococcus hemolyticus, Enterococcus durans from the surgical site infection which are sensitive to most of the antibiotics. We isolated multidrug resistant Acinetobacter baumanii which has been associated with long stay in the hospital. We conclude the importance of surveillance of surgical site infection, proper pre and postsurgical management, strict adherence to hospital infection control guidelines to prevent the occurrence of SSI in tertiary care hospitals as well as prevention of bacterial drug resistance.

The author(s) declare(s) that there is no conflict of interest regarding the publication of this article.