Introduction: Vibrio cholerae is a common causative agent of acute diarrheal disease across the world. Significant variations in epidemiological pattern and in vitro susceptibility of isolates are commonly observed. Emerging and progressive antibiotic resistance is frequently reported.

Objective of the Study: The aim and objective of conducting the current study was; To find out the epidemiological profile of cholera cases isolated from Bidar and surrounding area. To find out the antibiotic resistance pattern of these isolated enteropathogens.

Materials and Methods: The current study was carried out at tertiary care medical centre in Bidar, Karnataka for the period of 4 years from 2012-2015. A total of 310 fecal specimens were collected from clinically symptomatic (diarrheic/dysentric) individuals. The collected fecal samples were processed for commonly isolated enteropathogens by standard bactreriological methods. The colonies suspective of V. cholera were identified by standard biochemical reactions and serological confirmation was done by using specific antisera. Kirby-bauer’s disc diffusion method in accordance with Clinical and Laboratory Standards Institute guidelines was employed to find out the antimicrobial susceptibility profile.

Results: Out of 310 fecal samples, Vibrio cholerae biotype was isolated from 95 samples (30.64%). Among 95 isolated Vibrio cholerae strains 70 (73.68%) were belonged to serotype Ogawa, 15 to Inaba (15.78%) and 10 to Hikozima (10.52%). The isolated strains proved multi drug resistant to ampicillin and nalidixic acid and uniformly sensitive to tetracycline, ofloxacin, ciprofloxacin, chloramphenicol and gentamicin.

Conclusion: Our study revealed that, cholera cases in North Karnataka are found to be prevalent among age group of 15-25 and in females. The current study showed the importance of control and monitoring of V. cholerae by serogroup and antibiogram typing for policy makers and health professionals of this region as incidence of cholera increased year wise.

Acute diarrheal diseases reported as the second most prevalent communicable disease and the fourth leading cause of death in India with as many as 10762500 cases and 1,535 deaths reported in 2013.1 Cholera, being a common enteropathogen which have contributed to these figures, reports as the most important component because of its high epidemic potential and as one of the key indicators of social development. The scenario in developed countries which have minimum standards of hygiene is entirely different. Cholera is still predominant enteropathogen in India and other developing countries where access to safe drinking water and adequate sanitation is often limited.2

There are many different pathogens, including bacteria, viruses, and parasites, that can cause diarrhoea in both developed and developing countries. The most common isolated diarrhoeagenic pathogens include Escherichia coli, Rotavirus, Salmonella sp., Shigella sp., Campylobacter jejuni, Entamoeba histolytica, and Giardia lamblia.3, 4 Because the immediate cause of death in most cases of diarrhoea is dehydration, these deaths are almost entirely preventable if dehydration is prevented or managed or treated. Until 1970s, intravenous (IV) infusion of fluids and electrolytes was the treatment of choice for diarrhoeal dehydration, but was expensive and impractical to use in low-resource settings. In 1960s and 1970s, physicians working in South Asia developed a simple oral rehydration solution (ORS) containing glucose and electrolytes that could be used to prevent and treat dehydration due to diarrhoea of any etiology and in patients of all ages.5

Cholera is still an important public health concern across the world, particularly in developing countries. Globally a much higher number of Cholera cases were found than what it was reported. The discrepancy results from underreporting and other surveillance system limitations, including inconsistencies in case definitions and lack of a standard vocabulary.6

The underreporting with respect to identification of cholera cases due to lack of proper surveillance or the laboratory capacity to identify V. cholerae O1 or O139 has been observed. In India 21 reported cholera cases was found through literature search in at least one year from 1997 to 2013 the 14 states or Union Territories that reported no cholera cases were not necessarily free of cholera.7

North Karnataka, locally known as Uttara Karnataka is a geographical region consisting of mostly semiarid plateau from 300 to730 meters(980-2400 feet) elevation that constitute the northern part of the south Indian state of Karnataka.10 Epidemiology of the cholera in north Karnataka is unknown. Only Two reports of cholera, from North Karnataka are reported.11, 12

A significant variation in epidemiologically pattern was observed in recent years. The occurrence of antibiotic resistance creates a major problem in treatment of severe diarrhea cases, which needs antibiotic intervention. Antibiotic resistance has become a major medical and public health problem as it has direct links with disease management as multidrug resistant strains of V. cholerae have emerged.13

In the present study, we report the prevalence of Cholera in North Karnataka from the year 2012 to 2015 retrospectively. The study also monitors the antibiotic resistance of the Vibrio cholarae to different antibiotics.

Samples were collected from different parts of Bidar district (urban and rural area). Fecal specimens were collected from clinically suspected individuals with symptoms of diarrhea and dysentery. A total of 310 fecal samples were collected. Samples were processed in Department of Microbiology, Bidar Institute of Medical Sciences (BRIMS) Bidar. Patients were informed regarding the study and informed consent was obtained from all patients. Stool samples were collected in a clean, sterile wide mouthed universal container and immediately transported to lab in Cary-Blair transport media. As soon as sample reached in the lab, routine microscopy, hanging drop preparation (HDP) and enrichment in alkaline peptone water (APW) for 8 hours was carried out. HDP gives presumptive identification of V. cholera by assessing darting motility. After enrichment, samples were plated on Blood agar, MacConkey’s agar, Thiosulphate citrate bile salt sucrose agar (TCBS) agar and incubated at 37°C for 18 to 24 hours. The colonies with the characteristic appearance of Vibrio cholerae were identified by biochemical tests and confirmed by serological tests with Polyvalent O1, O139 and mono specific Ogawa and Inaba antisera (Becton Dickinson Company, India).

The antibiogram profile revealed that, out of 95 Vibrio isolates, all isolates exhibited Multi drug resistance. Isolates were resistant to antibiotics ampicillin and nalidixic acid and ofloxacin. However, they were sensitive to doxycycline, tetracycline, ciprofloxacin, chloramphenicol and gentamicin. 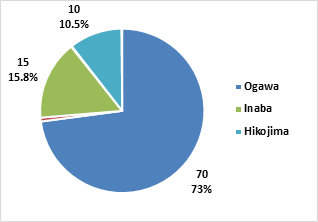 In developing countries like India, cholera is still a disease of public health importance. The actual number of cholera cases are much higher than what is reported worldwide. Many epidemics and pandemics occurred in India till to date. The first cholera pandemic occurred in Bengal and spread all over India by 1820.16 Vibrio cholerae remains in the environment and infect human beings whenever there is a breakdown in public health facilities like unsafe drinking water and poor sanitation.17 Climatic conditions also play a major role in spread of cholera. It has been observed that, the epidemics always occurred during end of the summer, pre monsoon and monsoon period of every year in different rural parts of the North Karnataka and the source always been the contaminated water. The change in serotypes of the organism is also a reason for outbreaks. When a serotype is replaced by other serotype it provides beneficiary effect to new serotype for survival in the environment which affects all age group including children.

Administration of oral rehydration solution (Rehydration) stays as a mainstay of cholera therapy, antibacterial treatment is also equally important to decrease the stool volume and length of disease illness. Doxycycline and tetracycline stays as main drug of choice for cholera since last three decades. But periodically the antimicrobial resistance of vibrio cholera has developed and same has been reported by many authors in worldwide including India. Vibrio cholera O1 strains isolated from Bangladesh and India reported a high level resistance to ampicillin, sulphonamide, tetracycline, trimethoprim and gentamicin. They also reported ineffectiveness of co-trimoxazole and furazolidone to treat patients. In the year 2005, Amit et al. reported nalidixic acid and tetracycline resistance from vibrio cholera O1 strains isolated from Kolkatta.

In conclusion, this study portrays the anti-microbial vulnerability pattern of Vibrio strains and uncovered the advancement of multidrug resistance among Vibrio strains in this endemic locale. A profoundly cholera endemic zone like Bidar need a ceaseless cautiousness on the changing pattern in the antibiotic susceptibility pattern of V. cholerae which is because of natural components and boundless utilization of anti-infection agents. The investigation shows that control of cholera as need. Since episodes of the sickness can upset well being framework, long haul intercession to improve water and sterilization demonstrated to be the backbone of cholera control measures.

The author(s) declare(s) that there is no conflict of interest regarding the publication of this article.