Khandelwal and Sutariya: Retrospective study of bacteriological profile and their antibiotic sensitivity pattern in urine of pediatric patients (0-12 years) in a tertiary care hospital of South Gujarat

Background & Aim: Urinary Tract Infections are common bacterial infections in pediatric age group. The diagnosis of UTI is very often missed in lower pediatric age group due to minimal and nonspecific symptoms. Etiological agents of UTI are variable and commonly depend on time, geographical location and age of patients. However E.coli and Klebsiella pneumoniae account for most of the cases. Present study aims at to determine prevalence and to evaluate changing trends of etiology and antibiogram of urinary isolates in children of 0-12 year age group attending Tertiary care hospital, of South Gujarat.

Materials and Methods:   A retrospective study was carried out in the Microbiology department of Tertiary care hospital of South Gujarat including all indoor pediatric patient’s urine samples received over duration of 6 months. Urine samples were processed according to routine protocol of the microbiology laboratory. Different bacterial isolates from urine samples were identified by using various biochemical reactions. Antibiotic-Susceptibility Testing was done using Kirby bauer disc diffusion method according to CLSI guidelines, 2018 for particular year. Qualitative data were presented as a proportion.

Results: Total 59 samples showed bacterial growth out of 595 indoor pediatric urine samples. Gram positive cocci were the predominant causative group of pediatric UTI accounting for 52.45%. Whereas Gram negative bacilli were 47.54%. Enterococcus group was the predominant etiological agent for 45.90% with maximum resistance to Primary line of drugs like Penicillin G and Ampicillin.

Conclusion: Drug resistance pattern amongst urinary isolates of pediatric patients indicates that antibiotic selection should be based on knowledge of the local prevalence of bacterial organisms and antibiotic sensitivities rather than empirical treatment.

Urinary tract infection (UTI) is one of the most common infection in children. It is defined as the presence of bacteria in urine in significant amount. The incidence of UTI differs with the age and sex of the children. Approximately 5-10% of all children less than two years of age with fever experience UTI. UTI in pediatric age group is different in all the way from adults mainly by following congenital abnormalities of urinary tract namely posturethral valves, pelvi-ureteric junction obstruction, neurogenic bladder, stricture urethra, vesicoureteral reflux which is very true in infants (<1-year age group).1

UTIs are often difficult to diagnose in lower pediatric age group because of nonspecific signs and vague symptoms. It is more important to diagnose the condition timely and accurately as it could be the first presentation of an underlying urological anomaly or it may itself can lead to significant morbidity from renal scarring, hypertension and eventually end-stage renal disease. In community and hospital settings the etiology of UTIs and antimicrobial susceptibility pattern of uropathogens have been changing over the years.2

Factors such as changing patient population, extensive use, and misuse of antimicrobial agents could all contribute to changes in the bacterial profile of UTI. Knowledge of antimicrobial resistance pattern of common uropathogens according to local epidemiology is essential for providing clinically appropriate and cost-effective therapy for UTI.4

A retrospective study was carried out in the microbiology department of tertiary care hospital of South Gujarat. A total of 595 urine samples collected from suspected indoor pediatric patients received in the duration over 6 months from May-2018 to October-2018 at microbiology department of tertiary care hospital was assessed. Clean catch, mid-stream urine samples were received in sterile universal containers. Urine samples were processed within 2 hour of collection and in case of delay, the sample were refrigerated at 2-8 ̊C.

A calibrated loop method (semi quantitative method)5 was used for the isolation of bacterial pathogens from urine samples. A loopful urine sample was plated on Mac-Conkey agar & Blood agar. The inoculated plates were incubated at 37 ̊C for 18-24 hours. The number of isolated bacterial colonies was multiplied by 1000 for the estimation of bacterial load/mL of the urine sample. A specimen was considered positive for UTI if growth detected at a concentration of ≥105CFU/mL.6 Significant isolates were identified by conventional methods according to the standard laboratory protocol, including colony morphology, gram staining and biochemical reactions. All gram-negative bacilli were identified to species level by their characteristic appearances on the media, Gram’s stain, Oxidase test, Motility and biochemical reactions as per standard laboratory protocol. All gram positive organisms were identified to species level by their characteristic appearances on the culture media, Gram’s stain, Catalase test followed by Coagulase test. Enterococcus was identified by Bile Esculin disc test and it was also confirmed by Salt tolerance test (6.5% NaCl.)

The antibiotic sensitivity test was performed by Kirby Bauer disc diffusion technique with commercially available Hi-Media antibiotic discs according to Central Laboratory Standard Institute (CLSI) guidelines 2018 on Mueller Hinton agar plates. The antibiotics which were used in our study were based on the standard protocol of the hospital and departmental policies. (as per CLSI guidelines 2018)

The qualitative data were expressed in proportion and percentages and the quantitative data expressed as mean and standard deviations. The difference in proportion was analyzed by using chi square test. Significance levels for tests were determined as 95% (P< 0.05). 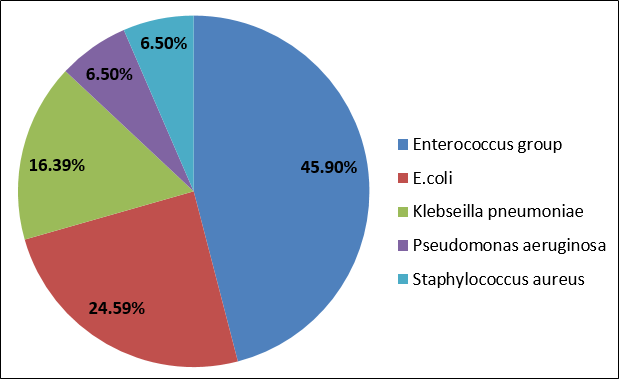 Urinary tract infection in the pediatric patient is a significant source of morbidity and considerable mortality. It is generally agreed that pediatric patient with UTI requires further investigation and treatment to minimize future complications, since UTIs in pediatric patients can be due to congenital abnormality of renal system also.7 The present study documents distribution and susceptibility patterns of various bacterial isolates from urine of pediatric patients over a period of six months at, Tertiary care hospital of South Gujarat.

The prevalence of culture- positive isolates observed in our study was 9.91% which was lower to findings of (14.7%) Mohanty et al8 In this study Enterococcus was the predominant uropathogen, accounting for approximately 45.90% which shows similar results with previous study done in same institute by Mulla et al.9 The reason could be predominance of Enterococcci in endogenous flora of the body.

In this study we found a high prevalence of UTI in males (54.23%) than in females (45.76%) which is in contrast to Beena et al.1 and Pal N et al.10 This may be due to the relatively more number of male children coming to the hospital and might have been attributed to the preference given to the male children in the Indian society. Similarly Patel P et al. (M: 52.45% and F:47.55%)11 and GK Rai et al. (M:51.7% and F:48.3%)12 also observed higher positive rate among male children compared with female children. In our study majority of growth positive cases were in the age group of less than 6 years our results are consistent with Patel P et al.11 also reported maximum number of patients in this age group.

Uropathogens are showing trend of increase in the antimicrobial resistance pattern in entire part of the world which can be explained by the fact that drugs are easily available over the counter in many countries, where prescription is not monitored and regulated leading to misuse of many antimicrobials. This problem is especially of concern in the developing countries where majority of patients often are unable to afford the consultation of a physician or have a laboratory analysis made.13

The authors declare no conflict of interest