Yadav, Agrawal, Chaurasia, Rastogi, Verma, Parashar, and Meena: Prevalence of keratinophilic fungi in the garden soil samples in Western India and study of its clinical impact

Background: Dermatophytosis has been a common contagious disease and remain an important public health problem among people worldwide and particularly in developing countries. This study was done in order to know prevalence of keratinophilic fungi in the soil samples of Ajmer region and its clinical correlation.

Materials and Methods: Five samples (5gm each) of garden soil were collected from each of the randomly selected 10 sites of Ajmer region in sterile polythene bags & pH of soil was recorded. All samples were processed in the laboratory using hair bait technique and incubated at 28 + 2◦C for 3-4 weeks. Fungi grown were subcultured onto Sabourauds Dextrose Agar (SDA) with chloramphenicol & SDA with cycloheximide and identified using standard mycological procedures.

Results: Out of 50 soil samples cultured 28 (56%) samples were positive for keratinophilic fungi. 64.28% were dermatophytes and 12.8% were non-dermatophytic fungi. The predominant isolate among dermatophytes was Trichophyton spp. (64.28%) where as Aspergillus spp. (12.8%) was the commonest non-dermatophyte.

Dermatophytes are filamentous, septate molds closely related keratino-philic fungi which are capable of invading keratized tissues of skin and its appendages like hair & nail (that are able to digest & obtain nutrients from keratin by unique enzymatic capacity). ‘Dermatophytosis’ commonly referred to as ‘ringworm’. The name dermatophyte consists of two parts, namely “derm” which means skin and “phytes” which means plants. They possess the affinity for parasitizing keratin rich tissues like skin, hair and nails and produce dermal inflammatory response and intense itching in addition to a cosmetically poor appearance. The causative fungi colonize only cornified layers of epidermis or suprafollicular portions of hair and do not penetrate into deeper anatomical sites. However, infections of deeper structures like subcutaneous soft tissue can occur under conducive condition. Dermatophytosis comprises of 30-40% of patients in India. The increase in prevalence of dermatophytosis in India is attributed to poor diagnosis, improper treatment and administrative negligence. During the last 40 years, studies of mycotic infections in humans and animals have increased significantly. The prevelance of superficial mycotic infection has risen at such a level that skin mycoses now affect more than 20-25% of the world’s population, making them one of the most frequent forms of infections.1 Recently fungal infections have gained the attraction of physicians and microbiologists which is mainly attributed to increase in number of immunodeficiency conditions like AIDS, patients receiving immunosuppressive drugs for malignancies and those under transplantation. So also the widespread use of broad spectrum antibiotics has contributed to the increase in the occurrence of fungal infection.2 Dermatophytosis tends to be a chronic condition, disfiguring and is associated with social stigma. Moreover an epidemiological data regarding the prevalence and incidence of dermatophyte species actually causing these infections is not known because patients are mostly treated based on clinical diagnosis. The classical presentation of tinea infection is a lesion with central clearing surrounded by an advanced, red, scaly, elevated border. This presentation though very typical of ringworm infection is very often confused with the other skin disorders, making laboratory diagnosis and confirmation necessary. The prevalence of dermatophytosis is governed by environmental conditions, personal hygiene and individual’s susceptibitily from place to place.3 This study is carried out to know the profile of the dermatophytes in soil setting of our area Ajmer and its correlation with clinical samples.

To determine the prevalence of keratinophilic fungi in the garden soil samples of Ajmer region and study of its clinical impact.

It was a prospective ecological study done over a period of 3 months at Department of Microbiology, J.L.N. Medical College, Ajmer.

Soil samples were collected in sterile polythene bags by scooping up to a depth of 2-5 cm with the help of sterile disposable spoon. Five samples of garden soil (5gm each) were collected from each of the randomly selected 10 sites of Ajmer city & pH of soil was recorded. All samples were processed in the laboratory using hair bait technique and incubated at 28 + 2◦C for 3-4 weeks.

Moist chambers were prepared using sterile Petri dishes and blotting paper & sterile Petri dishes were half filled with soil samples. 2-3 cm short hair strands of sterilized baits were placed over soil surface and 10- 15 ml of sterile water was added to the soil to provide optimal condition for facilitate germination of fungal spores. Petri dishes were than incubated at 28 + 2◦C for 3-4 weeks and plates were examined periodically for the development of mycelium. For fungal examination, a small portion of the fungal growth was picked up and examined by normal saline or Lactophenol cotton blue wet mount preparation microscopically. After a preliminary examination of fungal growth on baits, the growth was subsequently subcultured onto the slants of Sabouraud’s dextrose agar (SDA) with chloramphenicol (0.05 mg/ml) and cycloheximide (0.5 mg/ml) and also onto DTM to selectively isolate dermatophytes. After an incubation of 24 h, the single germinating spores with initial hyphal growth were removed using a sterilized long needle and transferred to fresh slants of SDA medium. In this way, mixed cultures were made pured. The fungi were examined for colony characters, color, texture, pigmentation on reverse side of colony and types of hypae, hyphal characteristics, presence or absence of spores (macroconidia or microconidia). Further identification of the fungal isolates was on the basis of hair perforation test and urea hydrolysis. All materials and culture media were obtained from HiMedia laboratory Mumbai, India. 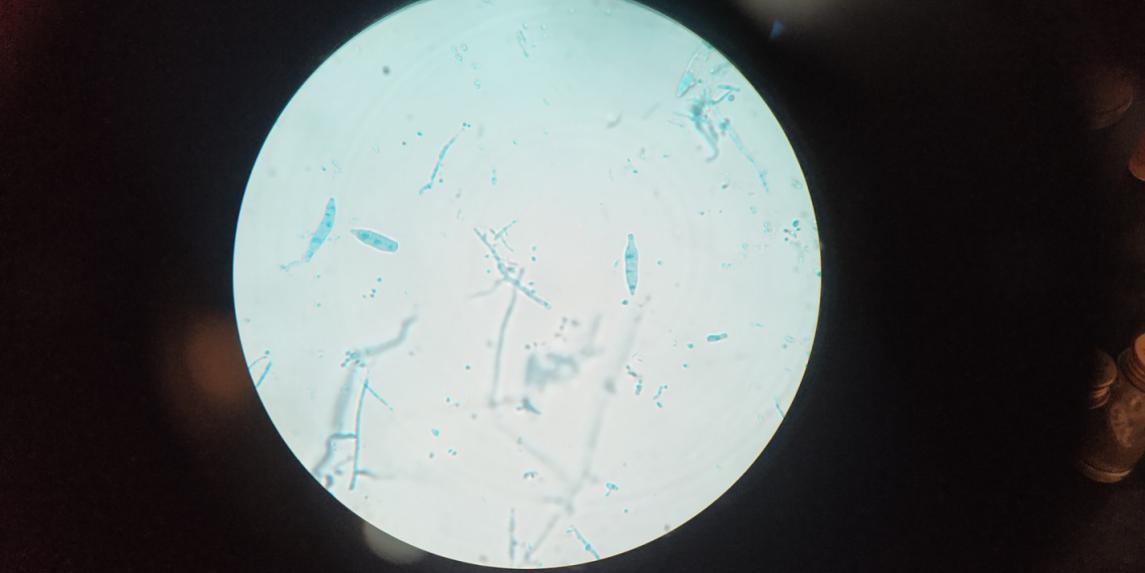 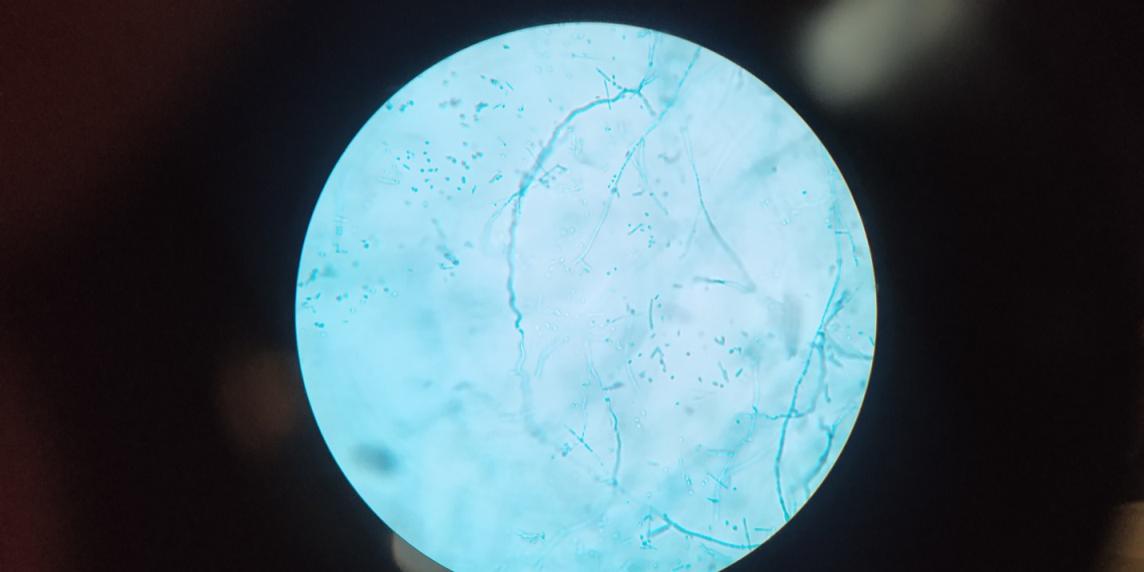 Short strands of human hair were placed in Petri dishes and dishes were autoclaved at 121◦C for 10 min; 25 ml of sterile distilled water and 2 or 3 drop of 10% sterilized yeast extract were added. These plates were inoculated with several fragments of the test fungus that has been grown on SDA. The plates were incubated at 25◦C and examined microscopically for perforations by removing a few segments and placing them in a drop of LPCB mounting fluid. 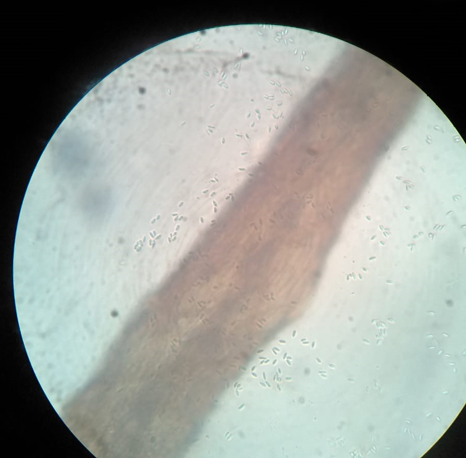 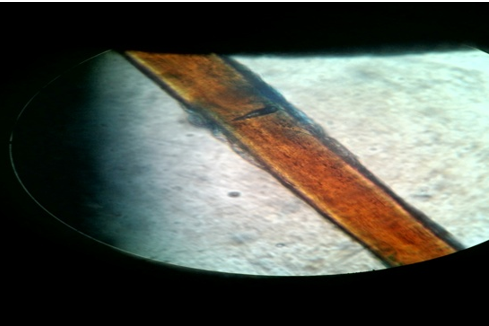 Frequency of occurrence of keratinophillic fungi in soil habitat

Distribution of keratinophillic fungi in soil habitat at Ajmer city

Out of 50 soil samples, 28 (56%) were positive for keratinophilic fungi by hair bait technique. Among 28 positive samples, 18(64.28%) were dermatophyte while 10 (35.71%) were non dermatophyte. Most common isolate among dermatophytes was T. rubrum.(53.71%) followed by T. mentagrophytes (10.71%). While among the non dermatophyte, isolates were A.niger (17.85%) and A. flavus (17.85%). In our study, then most common isolate was T.rubrum which is also the most common causative agent of Tinea corporis. In our hospital, dermatophytic infection including Tinea corporis is one of the most common clinical presentation of skin infection. Hence, soil may be a source of infection in case of Tinea corporis. Also A.flavus & A.niger from soil may be a source of human infection. Appropriate preventive measures need to be instituted along with education of the mass to prevent such infections.

In this study, the most common isolate was Trichophyton rubrum which is also the most common causative agent of Tinea infection in our clinical setting. This correlation between environmental and clinical isolates suggests the reason for the increasing dermatophytic infections in our area. The hot & humid climatic conditions of Ajmer were found to be favourable for the growth of dermatophytes which help in acquisition & maintenance of the dermatophytic infections. In association with favourable climatic conditions, poor hygiene also plays an important role in the growth of dermatophytes. The diagnosis of this fungal disorder is necessary due to clinical consequence with respect to its contagious nature, cosmetic consequences, chronicity, recurrences, and therapeutic difficulties. Therefore, education of masses about personal hygiene, good sanitation and use of protective measures while working with soil are important measures in controlling these infections. However significant isolation of particular species from specific garden soil needs to be elucidating by further elaborated studies on larger sample size. The importance of this however needs epidemiological follow up of clinical cases with tracking of their location.

M Sharma M Sharma Incidence of dermatophytes and other keratinophilic fungi in the schools and college playground soils of Jaipur, IndiaAfr J Microbiol2010424264754

H Rizwana Abdulaziz Amal A L Hazzani I Siddiqui Prevalence of dermatophytes and other keratinophilic fungi from soils of public parks and playgrounds of Riyadh, Saudi ArabiaJ Anim Plant Sci20122294853

N Jain M Sharma Distribution of dermatophytes and other related fungi in Jaipur city, with particular reference to soil pHMycoses2011541528