Background: Carbapenems are currently the only active beta-lactams effective against the ESBL producing pathogens; this has led to an increase in their use not only for documented infections but also for empirical treatment of acquired infections in ICU patients. Thus, there is a selective pressure for carbapenem resistance in intensive care units of tertiary care hospitals. Carbapenem resistant infections are associated with high morbidity & mortality.

Objectives: 1. To screen for carbapenem resistance among gram negative infections in ICU patients by disc diffusion & confirmation by Vitek 2 system; 2:  To detect the carbapenemase production by phenotypic methods; 3: To confirm the presence of resistant gene by PCR; 4: To find out the attributable risk factors from the clinical history of such patients; 5: To follow up & estimate mortality rate in such infections and its statistical correlation

Materials and Methods: A total of 160 gram negative isolates [E.coli(71), Klebsiella(63), Acinetobacter(10), Pseudomonas(9) and Enterobacter(7)] from patients of various intensive care units were screened by disc diffusion out of which 53(33.12%) were carbapenem resistant. Resistant isolates were further tested by Vitek 2 system for determination of MICs, Modified Hodge test(MHT) and Combined Disc test(CDT) for carbapenemase production and subjected to multiplex PCR for detection of resiatant gene i.e., bla NDM-1, bla VIM, bla IMP and bla KPC. Follow up of all the cases till the end of hospital stay was done and mortality rate was calculated.

Conclusion: 45% of carbapenem resistance is due to presence of NDM-1 gene, E.coli was the commonest isolate. Other mechanisms of resistance such as excessive ESBL production, porin loss may be responsible for resistance in remaining isolates. Effective infection control measures should be taken to prevent the spread of these super bugs in a ICU.

Carbapenems are beta-lactam antibiotics with a broad spectrum and high efficacy, they are often used as “last-line agents” or “antibiotics of last resort” when patients with infections become gravely ill or are suspected of harboring resistant bacteria and used as drug of choice for infections caused by Gram-negative bacteria that produce extended spectrum beta-lactamases (ESBL).1 The intensive care unit (ICU) often is called the epicenter of infections, due to its extremely vulnerable population and there is an increase in the use of carbapenems not only for documented infections but also for empirical treatment of acquired infections.2 Thus, there is a selective pressure for carbapenem resistance in intensive care units of tertiary care hospitals.

Antimicrobial resistance against carbapenems in Gram-negative bacteria can be caused by high level expression of ESBLs accompanied by changed porin expression or by specific enzymes named carbapenemases. Although known as “carbapenemases,” many of these enzymes recognize almost all hydrolyzable β-lactams and most are resilient against inhibition by all commercially available β-lactamase inhibitors.

The present study was done for screening the patients of Intensive care units of a tertiary care hospital for carbapenem resistant gram negative infections, phenotypic detection of the carbapenemases by Modified Hodge test, combined disc tests and genotypic confirmation of resistant gene by PCR as most of the genes conferring resistance are plasmid mediated and bacteria may be harboring more than one such resistant genes, finding out any attributable risk foctors for carbapenem resistance & associated mortality in such infections.

All the relevant details of the patients included in the study, i.e name, age, sex, occupation, duration of illness, whether any invasive procedures or surgical intervention done, history of antibiotic usage, site of infection, past history, family history, were taken in a structured proforma.

When performing phenotypic and genotypic tests, both positive and negative controls were used.

A total of 160 non repetitive, clinical isolates of Gram negative bacteria from the patients admitted in various Intensive Care Units which were screened in the microbiology laboratory over a period of one and half year (Jan 2015 to Aug 2016), were identified, based on the colony morphology3 and the biochemical reactions4 from a variety of clinical samples like urine, stool, sputum, blood, pus were included in the study.

All the meropenem screen positive isolates were tested by the following phenotypic methods: 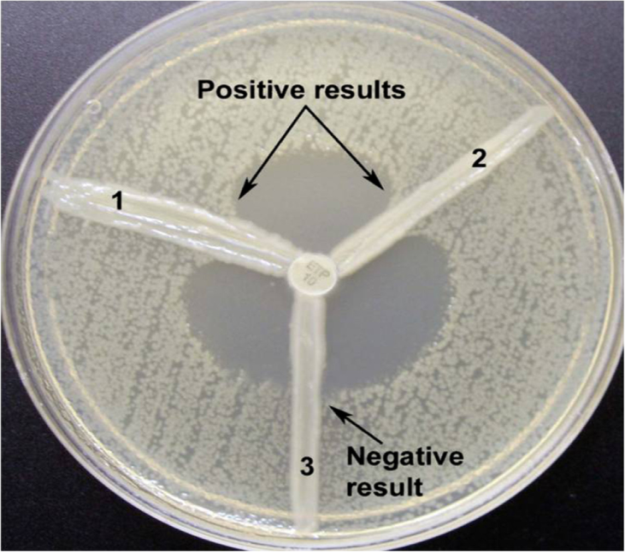 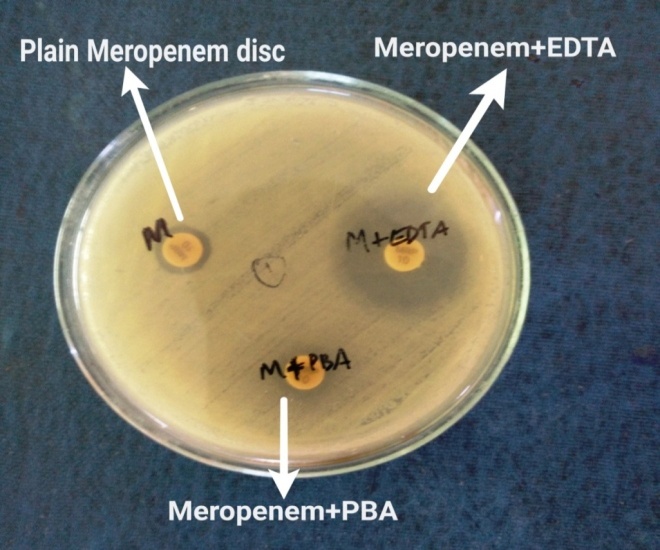 The multiplex PCR was done according to the methodology described in the Sambrook and Russell editors. In Molecular Cloning: A Laboratory Manual.7 Previously published primers were used by referring an article by Rachna Solanki et al., (2014)8 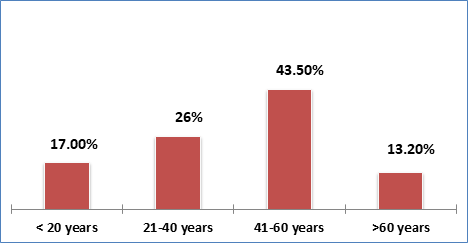 Patients within the age group of 41-60yrs showed highest percentage of resistance. 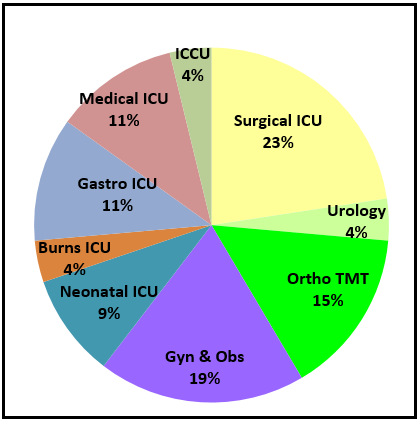 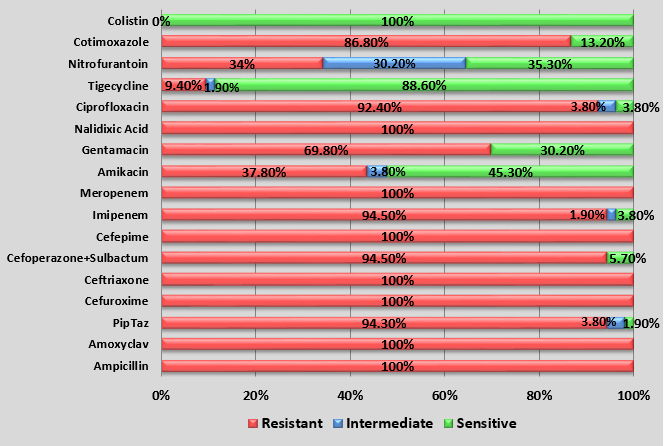 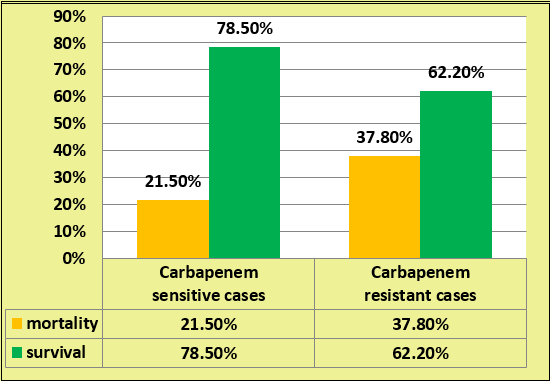 Correlation between presence of co-morbidities as a risk factor for carbapenem resistance was highly significant.(p value 0.01) shown in Figure 9.

Out of 20 deaths that occurred in ICU patients with carbapenem resistant infections, 13 cases (54%) were NDM-1 gene positive and 7 cases (24%) were genotype negative (p value is 0.026) i.e < 0.05 and hence presence of NDM-1 gene and mortality is statistically significant shown in Figure 10.

Results of phenotypic & genotypic detection of carbapenem resistance at a glance

Clinical characteristics of study population at a glance

From the Table 3, significant risk factors for development of carbapenem resistance in the present study are prior hospitalization, previous exposure to antibiotics, invasive procedures done in last 3 months, presence of co-morbidities and longer duration of ICU stay. Significantly higher mortality was seen in Carbapenem resistant cases(37%) compared to sensitive cases (21%).

Carbapenem resistance can be due to presence of Carbapenemase enzymes, excessive production of ESBL or porin loss or efflux pumps or combination of more than one mechanism.

Prevalence of carbapenem resistance is very high in Intensive care units, history of prior hospitalization should be considered before starting any antimicrobial therapy. Rapid detection tests like Combined disc tests can be used to detect metallobetalactamase production. Tigecycline, Colistin and to some extent Aminoglycosides can be used as therapeutic options for such infections and hence reduce morbidity & mortality.