Aims and Objectives: In the study we compare the sensitivity and specificity of two commonly used rapid serological test, Widal test and Typhidot, in the diagnosing of Typhoid fever.

Material and Methods: Serum samples coming to the microbiology laboratory for routine testing over the period from September 2019 to November 2020 were analysed for the comparison for the presence of the Salmonella antibodies by carrying out the Typhidot and Widal tube agglutination test in tertiary care centre.

India is endemic to Typhoid fever which is a systemic infection with high morbidity and mortality due to overcrowding and poor sanitation in low lying areas.1, 2 Typhoid fever is endemic, and has a reported data for the year 2005 showing 6,53,580 cases and 417 deaths.3 The annual incidence is as high as 980/100,000 in New Delhi.4 With the emergence of multi drug resistance in Salmonella typhi, treatment has become very challenging and has further complicated the situation. Due to non specific clinical history given by the patient, there an urgent need for rapid and reliable laboratory tests for accurate diagnosis. Also rapid diagnosis will help in commencing early treatment with, suitable antimicrobials for rapid recovery and prevention of complication and mortality. Widal test is the most common rapid serological test detecting both IgG and IgM antibodies together for over three decades but it has moderate sensitivity and specificity. Also it detects both the antibodies combined without specifying recent or past infection. On the contrary molecular test detecting the nucleic acid of the bacilli have a higher sensitivity and specificity but high costs which limits its routine use.5 The role of the Widal test is also under scrutiny due to its variable sensitivity, specificity, and predictive values that vary between geographical areas.6

Therefore there is a need of a serological test which is rapid, inexpensive, reliable, easy to perform with high sensitivity & specificity for diagnosis of typhoid.

A comparative study of Typhidot & Widal test in the diagnosis of typhoid fever was conducted from September 2019 to November 2020.

Samples which came positive for malarial antigen and dengue IgM and IgG antibodies were excluded from the study to rule out cross reactivity with Salmonella antibodies.

All the blood samples received in the laboratory were centrifuged at 2500 rpm for 5 minutes and the serum so separated was collected in a separate serum vial. All those samples which met the inclusion and exclusion criteria were subjected to:

Widal tube agglutination test by using Widal agglutination kit by Arkay. Set of 16 dry clean 10 x 75 mm test tubes were taken for the test. Dilution of the serum samples were made as follows

Like this 4 rows of test tubes are made. One of O, next H antigen, Next AH antigen and last BH antigen. All tubes are mixed well and incubated at 37 degree C for 16–20 hours and read for agglutination.

On site Typhidot IgG/IgM Rapid test by CTK was used based on lateral flow immunoassay was used to detect Salmonella antibodies. I drop (30- 45 µl) of serum was put in the centre of the sample well. After this, 1 drop (30 – 45 µl) of sample diluent was added into the sample well and allowed to stand for 15 min. After 15 minutes result was interpreted. Positive samples give a band on control line, IgM or IgG antibodies.

Prevalence ofmale and female according to test

PPV of Typhidot and Widal in predicting typhoid fever

PPV of Typhidot and Widal in predicting typhoid fever 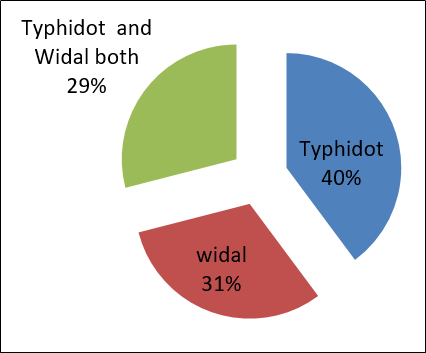 Showing the sensitivity and specificity of Widal test and Typhidot test

Though Widal test is being used as a diagnostic serological test for over a decade, but its low sensitivity and specificity has lead to a need of a new specific test. Also, its negativity in early infection and false positivity due to cross reacting antibodies from viral infection, malaria and others has lead to its non reliability. Pre-existing base line antibodies in endemic areas cross reactivity with other Gram negative bacteria and non typhoidal salmonella, anamnestic reactions in unrelated infections and prior TAB or oral typhoid vaccination has also resulted in poor specificity. Due to the various limitations of Widal test in diagnosing infection, came the need of a rapid, reliable and accurate test for diagnosing Typhoid fever.7

Discovery of Typhidot test resulted from the limitations of Widal. This test detects specific IgM and IgG antibodies independently against Salmonella typhi. Based on immunochromatography, it is simple, user-friendly, rapid and economical test with high specificity of 75%, sensitivity of 95%, and high negative and positive predictive values. It detects IgM antibodies suggesting acute early phase of infection, while both IgG and IgM antibodies suggests acute typhoid in the middle phase of infection. IgG antibodies of typhoid remain for more than 2 years after infection, hence we cannot differentiate between acute and convalescent cases.

In the present study we compare the commercial rapid diagnostic kits for their sensitivity and specificity. Our study shows a lower percentage of Typhidot test positivity in comparison to other studies. The results of previous studies which were done by various researchers, shown in Table 5.

Emergence of newer typhidot promises an additional advantage over other serologic diagnostic tests for typhoid fever in being rapid, accurate and inexpensive. Hence, we conclude that the typhidot appears to be a practical alternative to Widal test in the diagnosis of typhoid fever even in the resource poor laboratories as it neither requires much laboratory equipment’s nor laboratory expertise to conduct the test.