Materials and Methods: 641 samples from clinically suspected cases of dermatomycosis including the skin, hair, and nail samples were collected. All the relevant clinical, demographic, and epidemiological details were noted. Samples were then subjected to direct microscopy and fungal culture.

Conclusion: A combination of direct microscopy and culture was found to be superior than direct microscopy and culture alone. The recovery of NDMs and yeasts from routine dermatological samples in addition to the usual suspects, dermatophytes, also increases the awareness and suspicion among clinicians and mycologists to look beyond dermatophytes as the lone cause of superficial skin infections. Additionally, given the geographical location of Kashmir valley and its temperate climate with extremely cold winters (November to March) and a relatively milder summer with moderate humidity levels, when compared to the rest of northern Indian states doesn’t make it a suitable environment for fungal infections, more so the superficial mycosis. That said, people at risk are always vulnerable to develop fungal infections.

Fungal infections are a growing cause of concern in both hospital and non-hospital settings all over the world. Fungal infections are often characterized by the location of the infection. These may be referred to as superficial, subcutaneous, or systemic, which is also referred to as deep-seated.1 Dermatomycosis are superficial fungal infections of the skin & or its appendages. Although superficial or subcutaneous infections can cause serious morbidity, they are rarely fatal. Systemic or deep-seated infections also cause severe illness in many cases and, in contrast to mucocu­taneous infections, are often fatal.2 This increase in fungal infections can be attributed to the ever-growing number of immunocompromised patients, including transplant patients, individuals with acquired immunodeficiency syndrome (AIDS), patients with cancer and undergoing chemotherapy, and those individuals who are hospitalized with other serious underlying conditions and who undergo a variety of invasive procedures.1 Many factors influence the incidence of superficial mycosis, including biological and climatic conditions beneficial to the development of fungi in saprophytic life, promiscuity, excessive sweating, prolonged contact with animals and pets, and contaminated water in swimming pools and surrounding risk areas.

Superficial mycoses are infections of the skin, hairs, and nails caused by dermatophytes, yeasts, and non-dermatophyte molds, NDM. Amongst these, dermatophytes are responsible for the largest number of cases.3 The Indian subcontinent has a varied topography and the hot and humid climate which is more conducive to the acquisition of fungal infections. The nature of dermatomycosis may change with the passage of time, living conditions, and evolution of preventive measures and hygienic conditions in society.4 The prevalence varies in different parts of the world, in many tropical countries dermatophytes are the most common cause of skin disease.5 The valley of Kashmir, situated at the northern most geographical boundary of India has a temperate climate with mild summers and harsh winters. This distinct climatic pattern may be a deterring factor for development and progression of many fungal infections, especially the superficial fungal infections. This diversity persuaded us to study the mycological and epidemiological pattern of dermatomycosis and to further understand and contribute to knowing the distribution of the most common fungal agents responsible for skin, hair, and nail infections in this region of the world.

This retrospective study was carried out in the Mycology division of Postgraduate department of Microbiology, Government Medical College, Srinagar, J&K, over a period of two and a half years (April 2018 to October 2020). 641 samples from clinically suspected cases of dermatomycosis including the skin, hair, and nail samples were collected according to the individual patient’s signs and symptoms.

All the samples were collected under strict aseptic precautions. Before collection, the affected surface was cleaned with 70% alcohol. From different skin lesions, scales were collected from erythematous growing margins (advancing areas) of the lesion with a sterile blunt scalpel, and in case of suspected Tinea capitis, hairs were plucked with sterile surgical forceps. Further, samples were collected in sterilized Whatman filter paper envelope and transported to the Mycology division of microbiological laboratory. The samples which were received in the lab were then divided into two parts. Direct microscopy using 10% potassium hydroxide (KOH) for skin scrapings, skin biopsy, and epilated hairs and 40% KOH for nail specimens was done. The KOH wet mounts were screened under low power (10x) and then under high power (40x) for visualization of fungal elements. Further characterization of fungal elements as budding yeasts, yeasts with pseudohyphae, true hyphae, hyaline septate hyphae, dematiaceous hyphae, or mucoraceous hyphae (i.e., broad, pauciseptate hyphae) was done to label a slide KOH positive. The second part of the sample was inoculated on two sets of media:  (1) Sabouraud dextrose agar (SDA, HiMedia Laboratories) with 5% chloramphenicol and (2) SDA with 5% chloramphenicol and cycloheximide. The culture tubes were incubated at 25°C and 37°C. The cultures were examined thrice a week for 1 month and if no growth was obtained till 4 weeks, they were declared negative.

The isolates were further identified by observing their culture characteristics, pigment production, and microscopic examination with lactophenol cotton blue (LPCB) mounts and slide culture (wherever necessary). Whenever a dermatophyte was isolated in culture, it was taken as a true pathogen. However, if a non-dermatophytic mold or yeast was isolated, it was considered significant only if they were isolated repeatedly in pure culture (three times) on two media, with a positive KOH mount finding. To identify Candida albicans, germ tube test and Corn Meal Agar inoculation were done (Wherever necessary). Urease test was done to differentiate the Trichophyton species. Slide culture test was performed wherever necessary according to standard protocols.6

Age and gender-wise distribution of samples 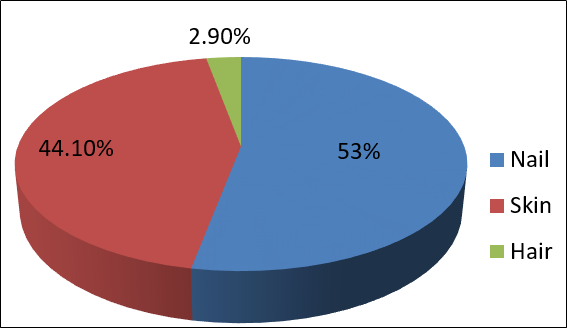 Total samples received in the laboratory and correlation between sample type, KOH, and culture

Dermatomycosis is the superficial fungal infection of the skin and its appendages and may be divided according to the responsible pathogen into dermatophyte, yeast, and mold infections.7 The incidence of fungal infections caused by true pathogenic or opportunistic fungi has been increasing since the past two decades. The emergence of these infections has created a challenge in their diagnosis and management.8 However, the data regarding the prevalence and etiology of dermatomycosis in a particular geographic region is sparse. In this study, an effort has been made to determine the prevalence, etiology, clinicomycological profile and distribution of dermatomycosis in a population of the northern Indian state of J&K’s Kashmir division.

In our study, the maximum number of cases was seen in the age group of 20–39 years (51%) followed by 40–59 years (28.7%). In a similar study from Kashmir, it was found that young adults ranging from 21 to 40 years (55.41%) were most commonly affected.9 In another study, a high prevalence in the younger age group was found in another study conducted in Gangtok in 2009 and in Bangalore in 2000 in our country.10, 11 This increased incidence in the young and adolescent population could be explained by the fact that they are involved in greater adventurous, outdoor activities, thus exposing them more to more occupation-related exposure and trauma. Furthermore, being more cosmetically conscious, they are more likely to visit out-patient hospital facilities more. Majority of the samples 337 (52.6%) were from males and 304 (47.4) were from females. A similar incidence in this age group and male predominance has been observed in workers in Shimla, India, in 2014.4 However, in a study from Kashmir in 2017 there was more of female preponderance.9 The higher male prevalence can be attributed to more outdoor pursuits resulting in increased diaphoresis which creates an ideal damp environment for fungal infections.

Out of the 641 samples, 35.9% were positive by KOH and 48.7% were positive by culture (Table 3). Various studies have shown that the KOH wet mount positivity ranges from 23.8% to as high as 91.2%, which was also seen in our study.4 In our study, 25.1% of KOH negative samples exhibited growth on culture, a study conducted in Ludhiana, India, only 13.2% of KOH negative nail samples exhibited growth on culture which was less compared to our observations.15 In a study by Lone et al.16 in the northern region of Kashmir, India, in 2013, KOH mount and culture showed positive results in 84 (56%) and 60 (40%) patients, respectively. Our culture positivity was more compared to the above study. With a significant percentage of KOH negative samples yielding growth on culture (25.1%), it is necessary that all KOH negative samples should be cultured for better recovery of the pathogen.

The predominant pathogens isolated in our study were dermatophytes (49.4%), followed by Non-dermatophyte molds (29.8%) and Yeasts (20.8%) (Table 4). A study conducted by Lone et al.16 in the northern region of Kashmir, India, observed that the most common isolates were dermatophytes (61.66%), followed by NDMs (31.66%) and yeasts (6.66%). These findings are similar to our observations that dermatophytes cause the highest percentage of superficial skin infections in our region. Greater prevalence of dermatophytes as the leading etiological agents was also observed in previous studies by Kaur et al.17 in New Delhi, India, in 2007 and Sayed et al.18 in Lebanon in 2006, while yeasts were the most common agents in a study from Kashmir by Asifa et al.9 in 2017 and Canada in 2000 by Gupta et al. 19 and in a Greek study by Koussidou et al. in 2002.20

Amongst the dermatophytes, Trichophyton mentagrophytes was the commonest isolate (41.5%) in our study, followed by Trichopyton tonsurans (23.4%), Trichophyton rubrum (12.3%). Kaur et al.17 in their study in New Delhi, India, in 2007 reported T. mentagrophytes as the most common dermatophyte isolated and so did a study from Kashmir by Asifa et al. 9 in 2017. Our findings were in concordance with the above authors. However, Lone et al. 16 in the northern region of Kashmir, India, in 2013, Alvarez et al.21 in 2004 in Colombia, and Veer et al.13 in 2007 in Aurangabad, India found T. rubrum as the most common dermatophyte. These variations may be attributed to various factors ranging from colder atmospheric conditions, lower humidity levels, lesser precipitation during summer months, to increased virulence and better adaptation of the other pathogens.

Yeasts were the least number of isolates recovered from the samples in our study, where Candida albicans (49.2%) was the most common yeast isolated, followed by Candida krusei (16.9%), Candida tropicalis (12.3%) and Candida glabrata (9.2%). These observations were similar to a study by Asifa et al.9 from Kashmir in 2017 and Lone et al.16 also from Kashmir in 2013.

This comprehensive and exhaustive study has given us a clear insight regarding the mycological pattern of dermatomycosis in this region. Our study in all likelihood is the first of its kind from Kashmir valley (Northern India) describing the clinico-mycological pattern prevalent and the various etiological agents involved in the skin, hair, and nail infections.

The ideal laboratory techniques for optimal detection and recovery of fungal isolates are necessary. A combination of direct microscopy and culture was found to be superior than direct microscopy and culture alone, highlighting the need for using both modalities for routine diagnosis. The recovery of NDMs and yeasts from routine dermatological samples in addition to the usual suspects, dermatophytes, also increases the awareness and suspicion among clinicians and mycologists to look beyond dermatophytes as the lone cause of superficial skin infections. Additionally, given the geographical location of Kashmir valley and its temperate climate with extremely cold winters (November to March) and a relatively milder summer with moderate humidity levels, when compared to the rest of northern Indian states doesn’t make it a suitable environment for fungal infections, more so the superficial mycosis. That said, people at risk are always vulnerable to develop fungal infections.

Due to the retrospective nature of this study it was not possible for us to ascertain various socio-demographic parameters, such as urban/rural residence, socio-economic status, living conditions and standards, sanitation, personal hygiene, education, comorbidities, and drug intake.

There is no conflict of interest.

We are highly thankful to the staff at Mycology division of the department of Microbiology, Government Medical College Srinagar for their support.