Background: A significant proportion of nosocomial infections is contributed by the Pseudomonas sp. Major changes were observed from time to time in Pseudomonas sp. prevalence and multidrug-resistant (MDR) with enormous morbidity and mortality. The spread of antimicrobial resistance has now become a worldwide issue as a consequence of the haphazard use of antimicrobials.

Place and duration: This study was done in the Amaltas Institute of Medical Sciences from February 2019 to December 2019.

Results: Sensitivity was seen in colistin and polymyxin B - 100%, meropenem - 86.58% and piperacillin -tazobactam - 82.92%. Resistance was seen in co-trimoxazole- 80.48%, cefixime- 82.92%, cefoperazone/sulbactam-59.75% and ciprofloxacin- 39.02%. The maximum number of MDR strains were isolated from the pus samples (n=18) as compared to other samples. The total number of ESBL producing strains was seen higher in the pus samples (n=15). The number of P. aeruginosa strains (n=57) was seen greater in number than other Pseudomonas sp.

Conclusion: The present study is an attempt to regulate the use of antibiotics that are irrelevant and wasteful. It is also a public health concern to take adequate measures, maintain cleanliness and hygiene to reduce the spread of nosocomial infections.

Pseudomonas is an ultimate example of the opportunistic nosocomial pathogen, which in immuno-compromised patients causes a broad range of infections and contributes to severe morbidity. The mortality due to nosocomial pseudomonal pneumonia is around 70 percent, despite therapy.1 Sadly, P. aeruginosa displays resistance to several antibiotics, thus endangering the option of effective therapy.2 In isolates that are multidrug tolerant, the relative contributions to phenotypic multidrug resistance from various molecular pathways are not well-known. While several surveillance studies have been performed over the years to control the resistance of Pseudomonas sp. to different antimicrobial agents, studies identifying trends in concurrent resistance to various antibiotics over time are rare.3, 4 One of the most serious complications associated with Pseudomonas is antibiotic resistance. Due to their ability to be naturally resistant to several pathogens, a limited number of antibiotics are successful.5 Most gram-negative bacteria (including Pseudomonas) are responsible for the production of ESBL, which shows resistance to many antibiotics of new generations.6 Very little data is available regarding the pattern of resistance of antibiotic drugs to Pseudomonas sp. in the Dewas, Madhya Pradesh. Therefore, we study the pattern of antibiotic resistance of Pseudomonas sp., as it is the first study in the tertiary care hospital of the Dewas region of Madhya Pradesh, India.

The present study was done at the Amaltas Institute of Medical Sciences, Dewas, Madhya Pradesh. It begins from February 2019 to December 2019. In this study total of 82 strains of Pseudomonas sp. were isolated from different clinical samples (Urine, sputum, pus, fluid, and Catheter tip samples) in the tertiary care hospital. Identification of Pseudomonas sp. was done by biochemical tests. Antibiotic susceptibility test (AST) method was done by Kirby-Bauer disc diffusion method as per CLSI (clinical and laboratory standards institute) criteria.7 All the analysis was performed using the simple percentage method.7, 8

All clinical samples collected were inoculated aseptically on MacConkey agar and Blood agar media plates in case of urine and pus samples while an additional chocolate agar plate was used in case of sputum samples which were incubated at 37°C for 24 Hrs. Urine samples were inoculated by using a 4mm inoculating loop. In the case of the urine sample, 105CFU/ml of growth was considered for significant bacteriuria. Further Pseudomonas sp. was identified by cultural characteristics, morphological characteristics.9

Identification of Pseudomonas sp. was done by biochemical tests.

Biochemical tests:- Pseudomonas sp. indicated Oxidase positive reaction. In mannitol test showed strong motility. The color of citrate converted to blue from green indicated a positive reaction. The urease tube remains unchanged indicates a negative reaction. Triple sugar iron (TSI) indicated alkaline slant /no change in the butt. Species identification of Pseudomonas was performed by the Oxidative-Fermentative (O-F) test for Glucose, sucrose, lactose, and mannitol; Liquefaction of gelatin, by beta hemolysis on a blood agar plate and test for nitrate reduction. The urease hydrolysis is also used for its identification. Other tests include decarboxylation of Arginine, Lysin, and Ornithine. The growth at 35 ⁰C and at 42⁰ C for a time duration of 18-24 hours on two tubes of trypticase soy agar (TSA).10

Antibiotic susceptibility test (AST) method was done by Kirby-Bauer disc diffusion method on Pseudomonas sp. following the guidelines of the Clinical Laboratory Standards Institute 2015. 11 First, the inoculums were prepared for AST with the help of nutrient broth by taking 5/6 colony of Pseudomonas sp. that matched to 0.5 McFarland standard (1.5x108CFU/ml) within 15 minutes, a sterile cotton swab was dipped into the inoculums suspension and pressed inside the wall of the tube above the fluid level, and inoculate over the dried surface of Mueller Hinton Agar (MHA) plate. After 3-5 minutes antibiotic discs were applied and gently pressed down to ensure complete contact with agar. The antibiotic disc used for AST in present study were purchased from Hi-media laboratories; co-trimoxazole (25µg), ciprofloxacin (5µg), ceftazidime (30µg), cefixime(30µg), gentamicin (10µg), amikacin(30µg), meropenem(10µg), cefoperazone/sulbactam (75/3030µg), piperacillin -tazobactam(100/10µg), colistin(10µg), polymyxin-B(300unit), piperacillin (100µg), tobramycin(10µg), cefotaxime(30µg) and amoxicillin/clavulanic acid (30µg). Zone of inhibition was measured in mm was concluded with interpretative criteria CLSI 2015 11 and isolates were sensitive, intermediate, and resistant. Pseudomonas aeruginosa ATCC-27853 was used as a control strain. 11

ESBL producers isolates were identified as resistant to antibiotics like ceftazidime, cefotaxime, and ceftriaxone in AST.12 Further confirmation for ESBL producing Strains was done by placing the amoxicillin/clavulanic acid at the center and on sides, ceftazidime and cefotaxime were placed 25 mm apart from center to center on inoculated MHA plate. The incubation of the MHA plate was done at 37°C for 18-24 hrs. The inoculums that showed zone of inhibition with synergism in between amoxicillin/clavulanic acid and cefotaxime or ceftazidime was confirmed ESBL producers.8

No ethical clearance was required in this study as it was done on stored refrigerated bacterial isolates. 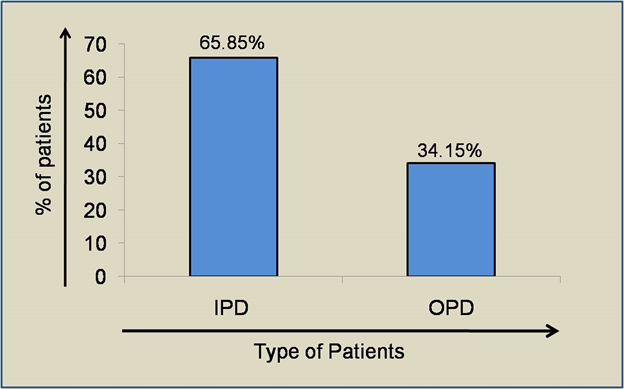 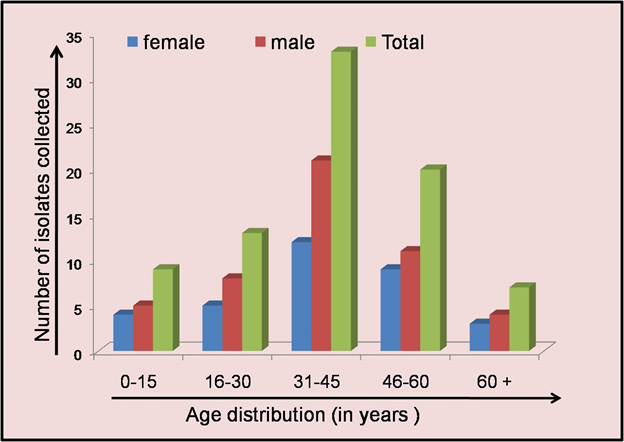 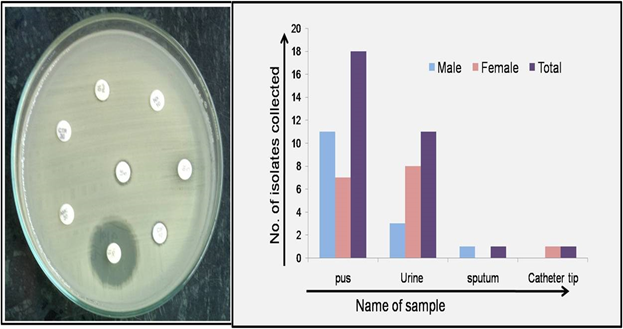 Distribution of isolated strains of Pseudomonas sp. from clinical samples 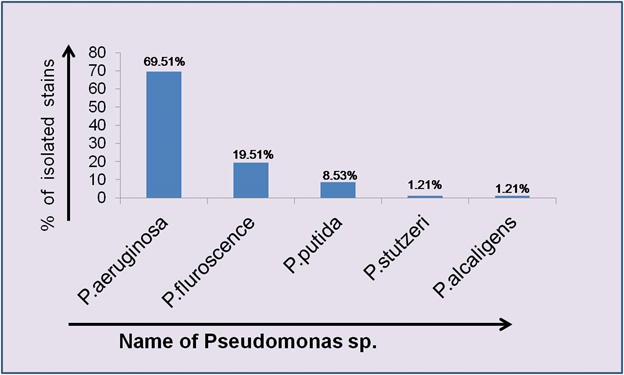 Distribution of ESBL strains of Pseudomonas sp. in clinical samples 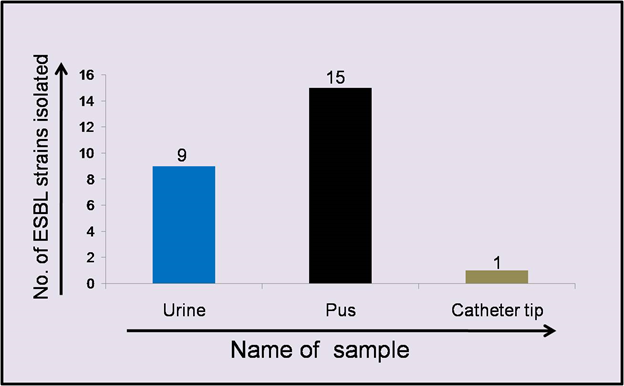 In the present study, maximum isolates of Pseudomonas sp. were found in pus samples (54.87%) followed by urine samples (32.92%), similar findings were reported by Khan et al. (2008)13 isolated maximum pus sample (57.64%) followed by urine (24.2%). In another study by Mohanasoundaram (2011)14 also showed higher isolates from pus samples followed by urine samples. A recent study by Nabamita Chaudhury et al., (2018)15 reported maximum isolates were isolated from pus samples(42.62%). In the present study, maximum isolates were found in the age interval between 31 to 45 years (40.24%). Previous research findings by Mohanasoundaram (2011)14 have reported the highest numbers of isolates of Pseudomonas in different age groups. So there is no significant relationship in the age of the patient with infection of Pseudomonas as it varies in different studies. In the present study, we showed the isolates of Pseudomonas sp. were maximum in male patients in the case of all types of samples. This outcome is consistent with a previous study by Khan et al., (2008),13 which found that 61.78% of males and 38.22% of females were infected with Pseudomonas. Many studies have shown that infection with the Pseudomonas sp. is more prevalent in men than in women by Ullah et al., (2019).16 In the present study, in-patients samples (65.85%) showed the maximum Pseudomonas isolates as compared to outpatients samples (34.15%). Mohanasoundaram, (2011)14 reported in the previous study align with the current study as they registered the highest number of inpatient cases, with 35.86%, 57%, and 40.7% in 2008, 2009, and 2010 respectively. In present study sensitivity was seen 100% (n=82) in colistin and polymyxin-B, 86.58% (n=71) in meropenum, 82.92% (n=68) in piperacillin-tazobactam, 68.29% (N=56) in tobramycin,67.07% (n=55) in gentamicin, 64.63%(n=53) in amikacin, 58.58%(n=48) in piperacillin, 56.09%(n=46) in ceftazidime and 51.21%(n=42) in ciprofloxacin. And resistance was seen 80.48% (N=66) in co-trimoxazole, 82.92% (n=68) in cefixime, 59.75% (n=49) in cefoperazone/salbactam, 39.02%(n=32) in ciprofloxacin and 36.58%(n=30) in piperacillin. Similar results of sensitivity and resistance reported by Senthamarai S, 201417 and Gencer S, 200218 and various other research articles with slight variations in some antibiotics as it varies from one to another region based on the physiological and ecological conditions. MDR isolates are sensitive to antibiotics like colistin, polymyxin-B, and meropenem are reported in several studies for Pseudomonas sp. and other ESBL producing organisms like Klebsiella sp. by Negi S, 2020.19 The total number of ESBL producing strains of Pseudomonas sp. in clinical samples was 30.48% in the present similar type of ESBL reported by Begum S, 2013.20

At the end of our study, we concluded that the most effective treatment for treating infections related to Pseudomonas sp. in the Dewas region is colistin, polymyxin-B, meropenem, and piperacillin-tazobactam. Maximum isolates of Pseudomonas sp. obtained from hospitalized patients indicated nosocomial infections. It is very necessary to conduct routine surveillance for resistance strains at regular intervals of time to protect many lives from harmful MDR strains. Our study is an attempt to regulate the use of antibiotics that are irrelevant and wasteful. It is also a public health concern to take adequate measures, maintain cleanliness and hygiene to reduce the spread of nosocomial infections. To minimize the spread of hospital-acquired infections, it is the primary responsibility of all health care staff and all clinicians, and all patients along with their relatives to facilitate adequate handwashing with soap or sanitization of all areas. We can protect many lives from life-threatening MDR strains in this way and also aim to keep our society healthy.

Authors are very thankful to all the staff members and technical staff of the Department of Microbiology, Amaltas Institute of Medical Sciences, Madhya Pradesh for their continuous support and help throughout the study.