Shakthi R and Venkatesha D: MRSA colonization in health care professionals with varying degrees of exposure to the hospital environment and its susceptibility to mupirocin in a tertiary care centre

Background: Methicillin-resistant S.aureus (MRSA) is one of the major causes of healthcare associated infections with significant morbidity and mortality. Health care workers act as a carrier in spread of MRSA in hospitals. Use of Mupirocin to eradicate the carrier state is the need of the hour.

Aim: This study was undertaken to assess the prevalence of MRSA colonization among health care workers with varying degree of exposure to hospital environment and to know the susceptibility of Mupirocin to MRSA.

Materials and Methods: Swabs were collected from anterior nares and finger web spaces of 100 health care workers (HCWs). The specimens were processed and colonies of S.aures were identified by standard methods. The strains of MRSA were identified by using Cefoxitin (30µg) disk on Muller Hinton agar. The MRSA isolates were then tested for Mupirocin susceptibility.

Results: In the present study, 100 nasal and inter digital spaces swabs yielded 15 and 10 MRSA strains respectively. Among the 100 HCWs screened, the majority of MRSA colonization was seen in HCWs with a history of exposure to hospital environment for around 5-10 years or more. All 30 S.aureus with 15 MRSA strains isolated was sensitive to both 5µg and 200µg Mupirocin disc by Kirby-Bauer disc diffusion method.

Conclusion: The high rate of Nasal MRSA carriage among health care workers is alarming. HCWs with long duration of exposure to hospital environment were more colonized with MRSA. More awareness and training sessions on the importance of MRSA and hand hygiene measures to be implemented to prevent MRSA transmission from HCWs to vulnerable patients. We suggest that MRSA screening should be performed for all HCWs and detection of susceptibility of Mupirocin will result in appropriate use of this antibiotic in decolonization.

Staphylococcus aureus is the most important cause of wound and skin infections. It is one of the common pathogen colonizing the hospital environment. Occurrence of resistance to semi synthetic penicillinase resistant penicillines such as Oxacillin and Methicillin is noted. Resistance is due to presence of an altered penicillin binding protein called PBP2a or PBPs from chromosomal gene called mecA. The S.aures strains with mecA determinant are termed as Methicillin resistant Staphylococcus aureus (MRSA).1 Methicillin resistance is usually acquired during exposure to hospitals and other health care facilities.2 MRSA can colonize the nose and other skin sites without causing infection. It can spread by the colonized hands of health care workers (HCWs). Colonized HCWs and students may develop infections and act as reservoirs for infection among vulnerable patients.3 Identification of HCWs colonized with MRSA followed by implementation of standard MRSA decolonization therapy such as topical application of 2% Mupirocin, chlorhexidine glucoanate, bacitracin along with oral therapies with tetracycline, folate inhibitors etc. have shown effective in reducing the transmission and controlling the spread of MRSA.4

Decontamination of MRSA carriers by 2% Mupirocin can decrease the infection rate among patients. However, inappropriate over the counter use, treatment of wounds, pressure sores and routine use in peritoneal dialysis with Mupirocin are associated with resistance, which will be a major setback for future use of Mupirocin.5 Mupirocin susceptibility is categorised into three types:

The resistance can be detected by Kirby–Bauer disc diffusion method, but dilution method is considered the gold standard for the determination of Mupirocin resistance levels.6, 7

The present study was undertaken to screen HCWs with varying degree of exposure to hospital environment and to know the susceptibility of Mupirocin in this group.

This cross-sectional study was done in department of Microbiology, Adichunchanagiri Institute of Medical sciences, B.G.Nagara. The study period was from July 2019 to December 2019. The ethical committee approval was taken. The samples were collected after taking written consent from all participants.

Nasal swabs from anterior nares and inter digital space samples were collected using sterile cotton swabs. The tip of the nasal swab was inserted approximately 1 inch into the nares and rolled five times in each nostril. The specimens were inoculated onto blood agar within 1 hour of collection and incubated overnight at 37⁰C. Suspected colonies of S.aureus were confirmed by morphology, Gram’s stain, Catalase test; Slide and tube coagulase test, Mannitol salt agar, DNAse agar.8

Antibiotic susceptibility to Methicillin was assessed using Kirby-Bauer disc diffusion method using Cefoxitin disc (30µg) as per CLSI guidelines. The Staphylococcus aureus with Zone of diameter of ˂21mm were considered as MRSA.9 Repeat samples were collected from the participants with nasal carriage of MRSA after completion of 2% Mupirocin topical application for 7 days and they were processed in the same manner as mentioned above for the confirmation of effective decontamination.

The MRSA isolates were then tested for Mupirocin Susceptibility by Kirby-Bauer disc diffusion method using 5µg and 200µg Mupirocin disc (HiMedia Laboratories pvt Ltd, Mumbai, India) to determine low and high level resistance The zone diameters were carefully examined with transmitted light for any light growth within the zone of inhibition. Isolates with no zone of inhibition were interpreted as Mupirocin resistant. Isolate resistant to 5μg disc and any zone for 200μg disc was considered MupRL. Isolates resistant for both the discs were MupRH.7, 9, 10

Among the 100 HCWs screened, the majority of MRSA colonization was seen in HCWs with a history of exposure to hospital environment for around 5-10 years or more (Figure 2).

All 30 S.aureus with 15 MRSA strains isolated were sensitive to both 5µg and 200µg Mupirocin disc by Kirby-Bauer disc diffusion method.

All the MRSA colonized HCWs and students were given 2% Mupirocin nasal ointment with Chlorhexidine body wash / soap for 5 days and the samples recollected at 7th day were Negative for MRSA. 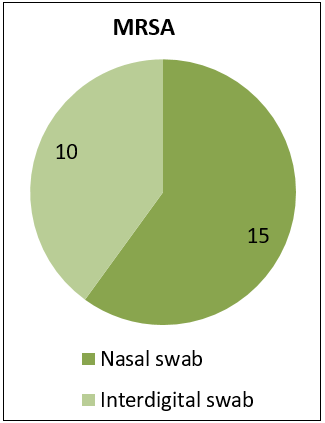 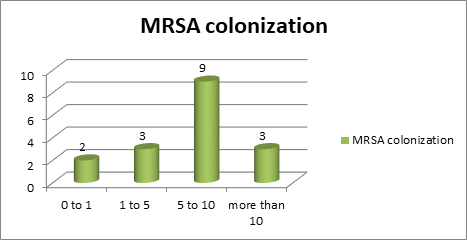 MRSA colonization increases the risk of infection with MRSA in both early and long term carriers of which 23% develop MRSA infection the following year.16 Increasing colonization of MRSA nasal carriage among HCWs leads to increased infection in both community and hospital. These individuals act as a potential source of infection especially to their immunocompromised patients, resulting in prolonged hospital stay and health care expenditure.17

Detection of MRSA colonization among HCWs in hospital is necessary especially for those working in the critical care areas.

In our study, the overall nasal carriage rate of S. aureus and MRSA was 30% and 15% respectively. Our results are in comparable to those of a recent studies by Kakhandki LS et al., Golia et al., Rongpharpi et al. and Al Lahman et al.,11, 12, 13, 14 whereas a very high rate of MRSA colonization has been reported by Archana Iyer et al., in Saudi Arabia.15(Table 4)

In the present study, MRSA colonization rate among doctors, post graduate students and nursing staffs are found to be 3 %, 4% and 8% respectively, indicating no significant difference between the carriage rates of MRSA among doctors and Nursing staffs. These findings are similar to other studies.18, 19, 20

All 30 S.aureus with 15 MRSA strains isolated were sensitive to both 5µg and 200µg Mupirocin, However, most of the studies related to clinical isolates and its susceptibility to Mupirocin showed both high level and low levels of Mupirocin resistance.22, 23, 24

The high rate of MRSA colonization among HCWs is potential source of infection for the patients who receive care from them, causing nosocomial infections. Hence regular screening of the HCWs for MRSA colonization and taking the appropriate preventive measures helps in significant decrease in mortality and morbidity. The prevalence of MRSA may vary between institutions, geographic areas, study design, sample size and method employed for MRSA detection.25 The limitation of this study was relatively small sample size and an increase in sample size could have yielded statistically significant results.

All HCWs should be screened for MRSA colonization, which provide an early warning of the presence of Multidrug resistant pathogens. The high rate of Nasal MRSA carriage among health care workers is alarming. Health care professionals with long duration of exposure to hospital environment were more colonized with MRSA. Proper measures must be implemented to control the spread of MRSA such as laboratory based surveillance, isolation of colonized persons, proper hand hygiene practices and proper decontamination measures for carriers. The detection of susceptibility of Mupirocin will result in appropriate use of this antibiotic in decolonization.

Sharon Rainy Rongpharpi The Prevalence of Nasal Carriage of Staphylococcus Aureus Among Healthcare Workers at a Tertiary Care Hospital in Assam with Special Reference to MRSAJ Clin Diagn Res201372576010.7860/jcdr/2013/4320.2741