Tuberculosis (TB) is a chronic infection of Mycobacterium tuberculosis. It is spread through the air from person to person and mainly targets the lungs. The tuberculosis epidemic has been complicated by the emergence of drug-resistant TB and HIV-associated TB. In Malaysia, there were an estimated 0.4% of 40,000 TB cases with MDR-TB in 2014. The acquisition of drug resistance in M. tuberculosis is mainly depending on the efflux mechanisms which allow the bacteria to tolerate higher levels of a drug. The evolutionary pathway of drug resistance is influenced by epistasis and bacterial fitness. There are a few risk factors that responsible for the occurrence of drug-resistant TB.

Tuberculosis (TB) is caused by the strain Mycobacterium Tuberculosis and is known to be one of the human-known diseases which exist for a long time. TB has many forms of manifestation, of which pulmonary TB to be the most common form of manifestation. Besides pulmonary involvement, TB can also affect the central nervous system, bones (Pott’s disease), and other systems. Being a multi-system targeting organism, TB will bring out a severe complication to one’s health. It’s all beginning from aerosol droplets that contain Mycobacterium Tuberculosis strains onto the lung alveolar surface. Once get infected, it will trigger the inflammatory cell infiltration where it tries to contain the bacteria in a place, forming a primary Ghon complex where it prevents the spread of the organism to another part of the body. It can either remain latent or reactive were the primary Ghon complex rupture and give rise to secondary TB. Although it does not produce any forms of a toxin like another organism, Mycobacterium tuberculosis virulence is not simple and complex since its structural and physiological features make it virulent. Some of the structural and physiological aspects include the ability to grow intracellularly, detoxification of radicals from oxygen, cord factor, high lipid density in the cell wall, Erp surface-located protein, mycocerosic acid, and adherence such as heparin-binding hemagglutinin (HbhA) are the most probable cause. Proper investigation and management should be done to cure TB patients. The investigation includes identification of acid-fast bacilli using BACTEC System via Ziehl Neelsen stains and culture.

For the literature, a total number of 6146 articles related to emerging aspects of tuberculosis were retrieved. Out of these 6146 articles, most of the articles were full-length articles and only a few were abstracts. Additional publications from World Health Organization (WHO) website, Clinical Research Centre (CRC) were also included. The database that used to search for relevant materials were from BioMed Central, PubMed Central, World Health Organization (WHO), the Malaysian Journal of Medical Sciences (MJMS), the Centers for Disease Control and Prevention (CDC) and Ministry of Health of Malaysia (MOH).

Tuberculosis is a chronic infection of Mycobacterium tuberculosis. It is spread through the air from person to person and mainly targets the lungs of an individual. Most of the infected people have latent TB, only some will develop active TB disease. Mycobacterium tuberculosis is a bacterium in the form of a nonmotile rod, also known as Koch's bacillus. It is a slow-growing bacterium that requires aerobes and is categorized as acid-fast bacteria. Middlebrook’s medium and Lowenstein-Jensen medium is used to grow Mycobacterium tuberculosis. Its cell wall contains peptidoglycan and three major lipid components like mycolic acids, cord factor and wax-D. Mycolic acids are powerful hydrophobic molecules that create a lipid shell and affect the permeability of the cell surface. The cord factor is harmful to mammalian cells and is an inhibitor of PMN migration. In the cell envelope, wax-D is found and also a major component of the Freund’s complete adjuvant. Special characteristics such as stain and dye absorption coefficient, tolerance to certain antibiotics, acid and alkaline compound resistance. Killing, resistance by complement deposition to osmotic lysis and resistance to lethal oxidation and survival of macrophage have been provided by high lipid concentrations in the Mycobacterium tuberculosis cell wall.1

In 2014, According to the Global TB Survey 2015, 1.5 million people have died from TB, 0.4 million people were HIV positive among these individuals. In 2014, an estimated 9.6 million new TB cases were registered, reflecting a global average of 133 cases per 100,000 population. There were approximately 30,20,000 cases and 4 lakhs 80thousands TB deaths among women. An estimated 10,00,000 childhood TB cases and 140,000 deaths have been reported as well. An approximate 5.4 million cases of TB among men and 890,000 deaths have been reported. In the WHO South-East Asia Region and the WHO Western Pacific Region, the largest number of new cases of TB occurred in 2014, accounting for 58 percent of new cases worldwide. Of all the new activities, five nations, including India, Indonesia, China, Nigeria, and Pakistan, accounted for 54 percent. Africa, however, had the most extreme burden, with 281 cases per 100,000 inhabitants.2

Estimated WHO Regional TB statistics for 2014

[i] (Source taken from: WHO | Global tuberculosis report 2015 (Rep.). (n.d.). Retrieved from www.who.int/tb/publications/global_report/en/)

[i] (Source taken from: WHO | Global tuberculosis report 2015 (Rep.). (n.d.). Retrieved from www.who.int/tb/publications/global_report/en/)

According to the 2015 Global TB Report, there were an estimated 4,80,000 new MDR-TB cases worldwide and 1,90,000 deaths from MDR-TB in 2014. There are also an estimated 300,000 cases of MDR-TB among patients with pulmonary TB. Globally, 123,000 MDR-TB patients have been registered, of whom about 75% live in Europe, India, South Africa, or China. Apart from that, 105 countries have registered XDR-TB. An approximate 9.7 percent of people with MDR-TB have XDR-TB, on average.2 In Malaysia, an estimated 0.4 percent of the 40,000 cases of TB with MDR-TB occurred in 2014, based on the TB country profile. Among the confirmed cases of pulmonary TB, there were an estimated 80 cases of MDR-TB.7 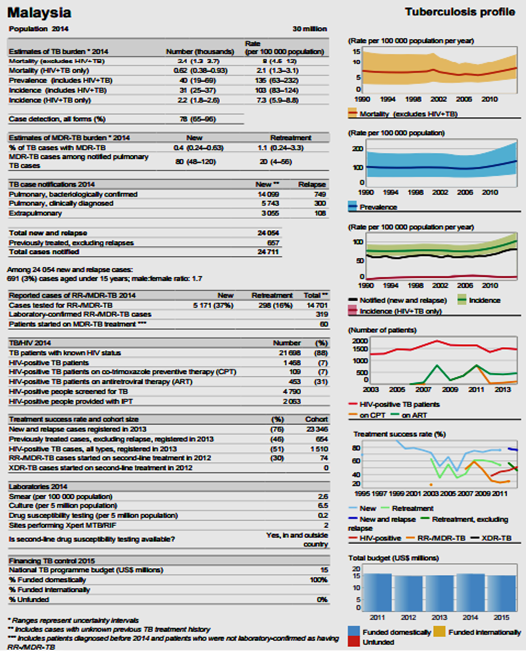 The Emergence of Drug-Resistant Tuberculosis

The global drug-resistant genetic diversity Mycobacterium tuberculosis suggests that drug resistance grows in regional hotspots of TB incidence on multiple occasions. As there has been continuous production of M.tuberculosis, this has allowed investigating the genetic determinants of this bacterium's drug resistance.8, 9, 10 The drug resistance acquisition in M. Tuberculosis depends primarily on the efflux processes enabling the bacteria to tolerate higher levels of medication. It does not rely on plasmid resistance and horizontal transfer of genes that play a major role in most bacterial pathogens in the selection of drug resistance.9 The concurrent selection and accumulation of mutations conferred by bacterial chromosome resistance has become a driving force for multi-antibiotic-resistant strain growth. These mutations interfere mainly with drug-target binding such as RIF-rpoB and FQ-gyrA, compromise prodrugs activation such as INH-katG and PA-824-fgd, or Over-expression of the target is induced by the promoter region, such as INH/ETH of inhA.11, 12, 13, 14, 15 Epistasis and bacterial health impact the evolutionary mechanism of drug resistance.16 Epistasis is characterized as a genetic interaction array where one mutation's phenotypic effect determines the existence of one or more mutations, while growth rate, virulence, and transmissibility are a function of bacterial fitness.17, 18 Most drug-resistance mutations have been shown to bear a fitness expense that typically includes very small fitness defects in resistant strains. As evolution is an ongoing process, resistant mutant fitness is not fixed and clinical strains typically bypass any resistance-imposed fitness costs relative to laboratory strains carrying the same mutation of drug resistance.19 It is also proven that M. tuberculosis have the capacity to induce disease and develop drug resistance strains from various lineages vary.20 The HN878 strains within Lineage 2, that is the East Asian lineage which includes the Beijing family of strains, are more mutable as compared to CDC1551 strains within Lineage 4, which is the Euro-American lineage, as they have polymorphisms in DNA replication, recombination, and repair genes.21, 22 The approaches such as whole-genome sequencing, phylogeny, molecular epidemiology, and mutation frequency analyses have been used to counter drug-resistant evolution M. tuberculosis.23, 24, 25

In summary, since tuberculosis remains a significant public health concern, modification of the global strategy to the unique TB treatment and prevention issues is important. It is critical for planning and vital services within a country to ensure political engagement, support, and stewardship. The implementation of a national strategic plan for the elimination of tuberculosis, integrated in national strategies for the health and social sector, and transparency for its execution should be ensured by the enhancement of central coordination under government stewardship by the setting up a national policy committee on TB. A patient-centered approach to care and service that is compassionate and sensitive to patients' needs and based on clear ethical principles is critical. Consideration should be provided to tailored training and TB awareness-raising events for medical and social care workers in touch with high-risk groups. Social initiatives need to reach beyond people already ill with TB and, through a "health-in-all-policies" approach, often focus on people and populations at risk. Without any financial burden, country-to-country cooperation and national legislation can ensure the functionality and accessibility of TB services for all migrants. In addition, it is necessary to screen for active LTBI TB in TB contacts and selected high-risk groups, and to provide adequate treatment. In short, through bilateral and multinational mechanisms, each country should support the implementation of all aspects of the global tuberculosis strategy, as the promotion of global tuberculosis advocacy could provide the visibility needed for sustained efforts to eradicate tuberculosis.

Availability of Data and Materials