Basher, Farhana, Alim, and Khan: Detection of catheter related blood stream infections in an ICU of a tertiary care center in Northern India

Introduction: Indwelling medical devices are frequently used in all health setting with critical care units of hospitals for treatment and intervention in patient care. Microorganisms attach to surfaces resulting in the formation of a biofilm which pose a serious public health issue because of its increased resistance to antimicrobial agents and the potential to cause infections.

Aims and Objectives: To determine the proportion of bacterial Biofilms in patients with central venous line and to find out the organisms most commonly associated with it.

Materials and Methods: The study was carried out from January 2019 to September 2020. Positive cultures were obtained from 58 of these 102 samples. The isolates were then tested for in vitro production of biofilm using a microtitre plate assay. All the isolates were subjected to antimicrobial susceptibility tests on Muller-Hinton agar by Kirby Bauer disc diffusion method based on CLSI guidelines.

Results: Demographic characteristics of the study subjects showed that among 102 catheterized patients isolated with males 58.82% and 41.1% females. Out of 58 isolates, 62.06% were gram negative bacteria (GNB) and 37.93% were gram positive. Staphylococcus aureus was most common isolate 27.58% followed by Klebsiella spp. 20.68%, Acinetobacter 15.5%, Coagulase negative Staphylococci 6.8% respectively. The total number of positive slime producers, in this study, was 23(39.6%). The highest number of strong slime producer strains was observed in case of Pseudomonas (2 out of 5), Klebsiella pneumonia (4 out of 12) and Staphylococcus(3 out of 16)Antibiotic susceptibility patterns showed increased resistance towards penicillin and beta -lactum group of antibiotics, increased sensitivity to linezolid and vancomycin among gram positive organisms. Among gram negative bacteria increased resistance was seen for cephalosporins and aminigylycosides and least resistance for colistin.

Conclusion: Colonization of indwelling medical devices with consequent biofilm production is a likely contributory factor to infections. The microorganisms survive in the hospital environment despite unfavourable conditions such as desiccation, nutrient starvation, and antimicrobial treatment. Resistance to antibiotics ladder is increasing and it’s necessary to take actions to reduce its hindrance in the future. Advanced studies in biofilm will help to prevent the more virulent factors which protect the bacteria from host immunity and to get rid of critical complications in therapy.

Microorganisms produce extracellular polysaccharides, resulting in the formation of a biofilm that attach to surfaces. Because of the increased resistance of biofilm-associated organisms to antimicrobial agents they pose a serious problem for public health There is a potential for these organisms to cause infections in patients with indwelling medical devices. Many bloodstream infections and urinary tract infections are associated with indwelling medical devices and, therefore, are (in most cases) biofilm associated. The most effective strategy for treating these infections may be removal of the biofilm contaminated device.1

A biofilm is defined as an architectural colony of microorganisms, within a matrix of extracellular polymeric substance that they produce. Biofilm contains microbial cells adherent to one-another and to a static surface (living or non-living). Biofilms are usually pathogenic in nature and are associated with nosocomial infections. The National Institutes of Health (NIH) has shown that 65% of microbial and 80% of chronic infections are associated with biofilm formation. There are many steps in biofilm formation, starting with attachment to a living or non-living surface that will lead to formation of micro-colony, giving rise to three-dimensional structures and ending up, after maturation, with detachment. Several species of bacteria communicate with one another during biofilm formation, through quorum sensing. In general, bacterial biofilms show resistance against human immune system, as well as against antibiotics. There are great health related concerns because of biofilm potential to cause diseases, utilizing both device-related and non-device-related infections.2

Most hospitalized patients have an intravenous catheter, and up to 30% have a central venous catheter for hemodynamic support, for infusion of medications that require instillation into a central vein, or for long-term venous access.3 These catheters are a major source of health care-associated infections. The Centers for Disease Control and Prevention estimated that 18,000 central lines associated blood stream infections occurred among patients in U.S. intensive care units and 23,000 among patients in inpatient wards in 2009.4

Formation of biofilm is universal on central venous catheters,but the location and extent of biofilm formation depend on the duration of catheterization. A short term (less than 10 days) catheters have more biofilm formation on external surface,whereas long term catheters (30 days) have greater biofilm formation on catheter lumen. Growth of microbes maybe affected by the nature of the fluid which is administered through central venous catheter.5, 6 Both Gram negative and Gram positive bacteria can form biofilms on indwelling medical devices. The most common biofilm forming bacteria are Enterococcus faecalis, Staphylococcus aureus, S. epidermidis, viridans streptococci, Escherichia coli, Klebsiella Pneumoniae, Acinetobacter baumannii and Pseudomonas aeruginosa.7

A number of tests are available to detect biofilm production by different bacteria. Methods include Tissue culture plate method, Tube method, Congo red agar, bioluminescent assay and light or fluorescent assay microscopic examination. In this study we screened isolates by tissue culture method to determine their ability to form biofilm.

This study was carried out from January 2019 to September 2020. During this period, 102 central venous lines were received in the microbiology laboratory. Positive cultures were obtained from 58 of these 102 samples. Peripheral vein sampling was done to rule out general bacteremia in all these patients to rule out seeding of the catheter through the blood. All cultured catheters were removed using sterile gloves after insertion site has been thoroughly cleaned with 2% povidine –iodine. After catheter was removed, the definition of catheter related infection was based on association of clinical signs (local or systemic)and significant catheter colonization. The distal 5cm of the catheter tip was cut with a sterile surgical scissors and put into separate container and then transported to microbiology laboratory in 2 hours for examination. To improve the detection of biofilm catheter vortexing was done. All catheter tips were cultured by the roll plate culture method directly onto 5% blood agar, Mac Conkey agar and chocolate agar. The plates were incubated at 37ºC aerobically for 24 hours. The number of organisms in the plates was evaluated quantitatively. A minimum of 15 colony forming units (CFU) in each plate was considered as positive catheter tip culture. Organisms were identified by standard microbiological procedures including various biochemical tests. All the isolates were subjected to antimicrobial susceptibility tests on Muller-Hinton agar by Kirby Bauer disc diffusion method based on CLSI guidelines.8

Organisms isolated from fresh agar plates were inoculated into 10 ml tryticase soy broth with 1% glucose (TSBglu). Broth was incubated at 370C for 18 hours. The broth culture was then diluted 1:100 with fresh medium. Individual wells of sterile 96 well flat bottom polystyrene tissue culture plates were filled with 200ul of the diluted cultures. Plates were incubated at 370C for 24 h. contents of each well were removed by gentle tapping. The wells were washed with 0.2 ml of phosphate buffer saline (ph7.2). Biofilm formed by bacteria adherent to the wells was fixed by 2% sodium acetate and stained by crystal violet (0.1%). Excess stain was removed by using deionized water and plates will be kept for drying. Optical density (OD) of stained adherent bacteria was determined with an ELISA reader at wavelength of 570nm. These OD values were considered as an index of bacterial adherence and biofilm formation.

The study was conducted in the clinical bacteriology laboratory, Department of Microbiology of Govt. Medical College, Srinagar and Kashmir. The central venous line received from patients admitted in SICU during January 2019 to December 2020 was processed for isolation and identification of bacterial pathogens according to the standard microbiological techniques.

Distribution of cases by age and gender (N= 102)

Depicts the bacteriological profile of isolates 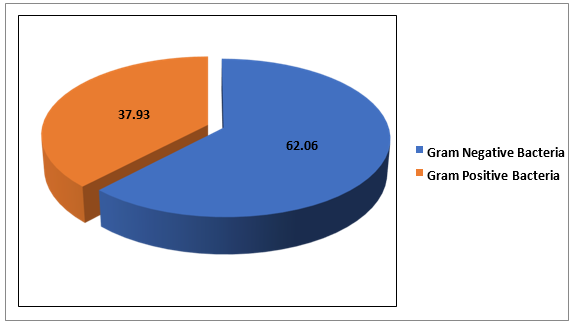 Isolates were screened for biofilm formation by TCP method. Out of 58 isolates, classification was done as Strong producer, Moderate producer, Weak/ Non-producer – 20.68%, 27.58%, 51.72% respectively based on their OD values as depicted in Table 5.

Antibiotic susceptibility patterns of various organisms isolated from central venous line. They showed increased resistance towards penicillin and beta-lactum group of antibiotics, increased sensitivity to linezolid and vancomycin among gram positive organisms. Among gram negative bacteria increased resistance was seen for cephalosporins and aminigylycosides and least resistance for colistin.

Indwelling medical devices are frequently used in all health setting with critical care units of hospitals often using multiple medical devices for treatment and intervention in patient care.10 Intravascular catheters may be inserted for administration of fluids, blood products, medications, nutritional solutions, and hemodynamic monitoring. The organisms may originate from the skin of patients or healthcare workers, to which entry ports are exposed or other sources in the environment.7 Staphylococcus spp., Acinetobacter spp., Klebsiella spp Pseudomonas spp., and Enterobacter are the commonest causes of nosocomial infections. Colonization of indwelling medical devices with consequent biofilm production is a likely contributory factor to such infections. These microorganisms survive in the hospital environment despite unfavourable conditions such as desiccation, nutrient starvation, and antimicrobial treatment. It is hypothesized that the ability of these microbes to persist in these environments, as well as their virulence may be a result of their capacity to colonize medical devices.11

The antibiogram of all bacterial isolates was performed using different antibiotics. The results obtained showed that the least resistance rates of Gram-negative bacteria were observed with colistin, tigicycline, imipenem and aminogycosides. All Gram-positive isolates were sensitive to linezolid, vancomycin followed by aminogycosides and cotrimoxazoles.

M Climo D Diekema DK Warren LA Herwaldt TM Perl L Peterson Prevalence of the Use of Central Venous Access Devices Within and Outside of the Intensive Care Unit: Results of a Survey Among Hospitals in the Prevention Epicenter Program of the Centers for Disease Control and PreventionInfect Control Hosp Epidemiol20032412942510.1086/502163