Bindu, Chinthaparthi, and Bandlapalli: Antibacterial effect of titanium dioxide with or without silver as additive on staphylococcus aureus from clinical samples

Introduction: Antibiotic resistance has now become a perpetual global problem due to the emergence and reemergence of old and new multiresistant bacteria that there is a constant need of newer drugs to combat this phenomenon. Nanoparticles are now considered for their antibacterial effect and those such as Titanium dioxide have a good mechanical properties and biocompatibility, especially being non toxic to human skin and cost effective. This study was done to show the antibacterial effect of Titanium dioxide with and without Silver as addendum on Staphylococcus aureus strains from clinical samples.

Materials and Methods: Staphylococcus aureus isolated from various clinical samples was inoculated onto peptone water and further inoculated onto glass slides coated with TiO2 annealed at 2000C, 4000C and onto TiO2 with 0.1%, 0.3%, 0.6% and 0.8% silver as additive at 1 hour intervals each. The growth was observed after 18 hours of incubation.

Of the different species of Staphylococcus, Staph. aureus is known to be a pathogenic organism associated with many infections. It is produces coagulase which is one of the virulent characters of Staph aureus. The other staphylococci do not produce coagulase and are mainly non pathogenic. Coagulase negative staphylococci (CONS) such as staphylococcus epidermidis and Staphylococcus saprophyticus are present as a normal flora of the skin and mucous membrane, but of late are known to cause many nosocomial infections.2, 3, 4

Staph aureus is found to be a regular inhabitant of the skin, nares, and respiratory tract of man.5 It is one of the most common organisms associated with a wide variety of infections including skin and soft tissue infections like pimples, boils, abscesses, carbuncles, impetigo, folliculitus, urinary tract infections, cellulitis, scalded skin syndrome, endocarditis, toxic shock syndrome, bacteriemia, septicaemia, osteomyelitis, meningitis, pneumonia.6 It has been reported that infected prosthetic inplants and devices are one of the major sources of staph infections.

Uses of indwelling devices is one of the routine procedures in surgeries since the recent past. However, infections to these devices leading to complications is a major object of concern. It has been reported that more than 2 million diseases in the United States of America, which is the cause for morbidity and mortality are due to indwelling devices thus requiring longer hospital days and repeated surgical procedures.7

Although antimicrobials are of paramount importance to fight diseases, their regular abuse has lead to the development of multi drug resistant bacteria. Antibiotic resistance has now become a perpetual global problem due to the emergence and reemergence of old and new multiresistant bacteria that there is a constant need of newer drugs to combat this phenomenon.8 The continued occurrence of drug resistance has given rise to the importance of alternate strategies for treatment of such microorganisms. Since most of the bacterial colonies occur as a surface mediated process, a promising alternative can be with the use of methods which are aimed at modulating the interfacial interactions between the surfaces such as indwelling devices and the host tissues. Of late there is a lot of interest in the field of nanomedicine wherein different types of nanoparticles are used for their antibacterial effect.

Titanium dioxide (TiO2) has a wide range of application. It has found its use in water cleansing, self cleaning glasses and in air purifiers. It has good mechanical properties and biocompatibility, especially being non toxic to human skin and cost effective. Thereofr they have been found in orthopedic prostheses, orthodontics, joint replacement and so on.9, 10, 11 Silver, since time immemorial has been known for its antimicrobial properties, but its potential had not been utilized till of late, after the reduction of the size to nano level. This resulted in an increased surface area, thereby acting as antimicrobial agents to even drug resistant bacteria.

This study was done by the Department of Microbiology of Mallareddy Institute of Medical Sciences for 1 and 1/2 years during June 2019 to Feb 2021. Prepared nanoparticles of Titanium dioxide annealed at 2000C, at 4000C, TiO2 coated with 0.1% Ag, TiO2 with 0.3% Ag, TiO2 with 0.6% Ag, TiO2 and with 0.8% Ag as addendum was procured from m/s NanoRam technologies, Bangalore (Fig: 1). 25 Staphylococcus aureus strains from various clinical samples were processed as per regular culture methods and antibiograms were put up as per CLSI protocol. All the samples with Staphylococcus aureus as a single growth was taken into the study. Culture positives with the other organisms were excluded from the study. 5 uncoated plain slides were taken as controls.

All the glass slides coated with the nanoparticles and uncoated plain slides which were taken as controls were covered individual with aluminium foil and sterilized in hot air oven at 1600C, for 60 mins. The pipettes and tips to be used also were sterilized. 1 colony of Staphylococcus from the culture plate was taken and inoculated into sterile nutrient broth and incubated overnight at 370C. This was the working solution, which was adjusted to 0.5 MacFarland’s standard the next day. 200ul of the working solution was taken and added to each slide with TiO2 annealed at 2000C, TiO2 annealed at 4000C, TiO2 with 0.1% Ag, TiO2 with 0.3% Ag, TiO2 with 0.6% Ag, TiO2 and with 0.8% Ag and uncoated plain slide. From each of these slides, 100ul was taken and added to 900 ul sterile nutrient broth to make a 1:10 dilution. Doubling dilutions from this was done using 100ul of the solution to 900ul of nutrient broth till a dilution of 1: (1x107) was attained. 100ul from each of these tubes was added to sterile Mueller Hinton plates, streaked. The plate was then coved with a dark paper to give a dark atmosphere and incubated at 370C for 18 hours. The slides were placed individually in sterile plates and also incubated at 370C. After each hour of incubation for a total of 8 hours, the slides were removed and the doubling dilution procedure was repeated on fresh MHA plates and incubated with dark paper cover at 370C.

The next day, the plates were observed for the growth of staphylococcus. The colonies present were counted with a colony counter and the CFU/ml was calculated accourding to the formula:

CFU/ml = dil x no of colonies. 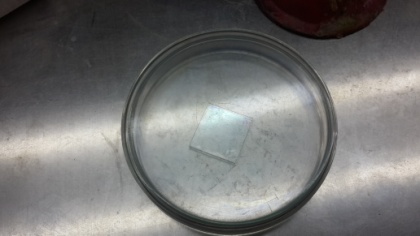 Staphylococcus treated with TiO2 doped with 0.6% Ag at base time, after 3 hour and after 6 hours 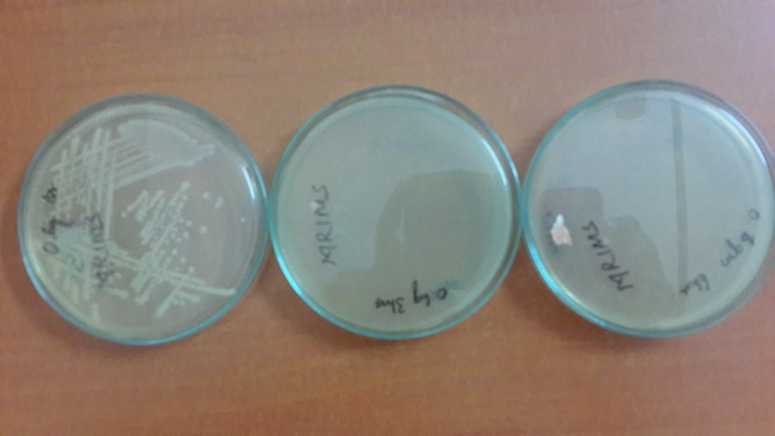 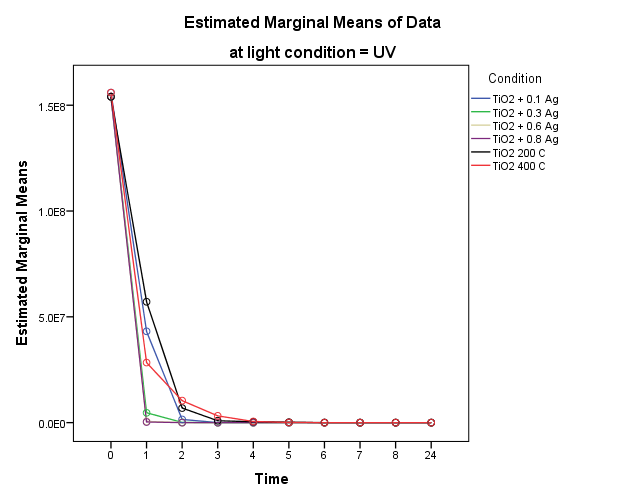 Babaei et al (2016) studied the effect of TiO2 on Staph aureus and reported that there was a decrease in the population of S.aureus when they were grown in the presence of TiO2. They also researched the effect of contact time and concentration of TiO2 on the bacteria and observed that by in longer exposure time to UV radiation, there was an increase in the photocatalytic activity of the TiO2 on Staph and the number of CFU/ml thus reduced.13 Sawai et al., (2003), Hernandez – Sierra et al (2008) and Liu et al (2009), reported the high antibacterial effect of nanpoparticles on Staphylococccus aureus.14, 15, 16 Soderderg et al (1990) have stated that there was a clear antibacterial effect of 179 and 1790 ug/ml zinc oxide.17