Agarwal, Srivastava, Bose, and Maheshwari: Uropathogens and their antibiotic susceptibility profile in a tertiary care hospital

Uropathogens and their antibiotic susceptibility profile in a tertiary care hospital

Background: Urinary tract infections (UTI) are one of the most common infections in the community and hospitals. Uropathogens colonize the urinary tract and may ascend to bladder causing cystitis, if left untreated reach kidneys through ureters can be responsible for acute pyelonephritis and cause renal damage.

Aims: The aim of the present study is to determine the prevalence of urinary tract infections and antibiotic susceptibility pattern in a tertiary care hospital.

Conclusion: In the present study, beta-lactamase inhibitors and aminoglycosides were effective drugs against gram negative bacteria. Vancomycin and linezolid were sensitive in gram positive bacteria. Nitrofurantoin is the promising drug in cases of uncomplicated UTI, and safe to use in pregnancy. High recurrence rates and antimicrobial resistance are responsible for increasing the burden of disease. It is advised to use the antibiotics judiciously as per the hospital antibiotic policy which will help prevent multidrug resistance micro-organism further reducing morbidity and mortality.

Uropathogens vary from place to place depending on demographic features, community or hospital based, use of different antibiotics in different hospital settings also affects the antimicrobial sensitivity profile depending upon the use of broad-spectrum antibiotics.1, 3 There are various factors responsible for the virulence mechanism of uropathogens to enter the urinary tract and cause infection. Enterobacteriaceae family especially Uropathogenic Escherichia coli (UPEC) is frequently associated with UTI. It attaches to the uroepithelium by pili, Type 1 fimbriae, P fimbriae and adhesions promoting bacterial colonisation and causing inflammatory response in host.4, 5, 6

Certain anatomical and physiological features play an important role in urinary tract infections. In females due to the short urethra, faecal contamination of the vaginal orifice is frequently leading to UTI.1, 2 It is more prevalent in females mainly sexually active young women, long term catheterized patients and elderly male individuals.7 In elderly male individuals due to conditions like neurogenic bladder, prostate enlargement, there is incomplete emptying of bladder leading to residual urine. The vesico-ureteric reflux is common in pregnancy leading to recurrence.1, 4 Recurrence is common in all such individuals due to the predisposing factors. It is found that about 50% of the females develop urinary tract infection at least once in their lifetime.1, 7

The predisposing factors responsible for UTI should be identified early and treated in time. Delayed treatment can lead to recurrence and if persist for long time can cause renal complications like hydronephrosis, acute pyelonephritis, acute renal failure, and irreversible kidney damage.1, 5 The aim of the present study is to know the prevalence of urinary tract infection, their causative micro-organisms(uropathogens) and antibiotic susceptibility pattern in our tertiary care hospital setup.

The present study is an observational study to determine the prevalence of bacteria causing urinary tract infections (Uropathogens) and their antimicrobial sensitivity profile carried out in Bacteriology laboratory in the department of Microbiology, Hind Institute of Medical Sciences, Barabanki. The duration of the study was six months from 1st January 2019 to 30 June 2019. A total of 673 samples with symptoms of urinary tract infection were included in the study both indoor and outdoor location of various departments of the hospital.

Patient’s consent was taken on an Informed Consent form. The study was ethically approved by the Institutional Ethical Committee (IEC).

A total of 673 non duplicate urine samples were taken both from outpatient departments and various wards. The mid-stream urine (MSU) was collected in a sterile wide-mouthed screw-capped container. The first part of the urine was not to be collected (as it might contain commensals from the anterior urethral region). The samples collected were transported to the laboratory, and if there was a delay, the samples were stored at 4oC till further processing.

In the laboratory, uncentrifuged urine sample was observed in 400x magnification for epithelial cells, pus cells, RBCs and any micro-organisms. Culture of the urine samples collected was performed with standard calibrated loop on UTI Chromogenic agar (HI media-code M1353R). The inoculated plates were incubated at 37oC for 18-24hrs under aerobic conditions.

Interpretation was done based on semi-quantitative analysis as

Antibiotic Susceptibility Testing (AST) was done for culture plates with significant growth. The isolated colonies from the identified species were suspended in normal saline and the inoculum was prepared. The density of the suspension was compared with the 0.5 Mac Farland’s opacity standards. Kirby Bauer’s disc diffusion method was performed on Muller Hinton agar (HI media).The results were interpretated using the Clinical Laboratory Standards Institute 2018 guidelines.9

Data was collected on a preformed questionnaire containing personal details,clinical and demographic details of patients.The collected data was entered in an Excel sheet and graphs were generated. The results were statistically analysed using Advanced excel software and presented in the form of tables and figures.

Distribution of different isolates on the basis of morphology 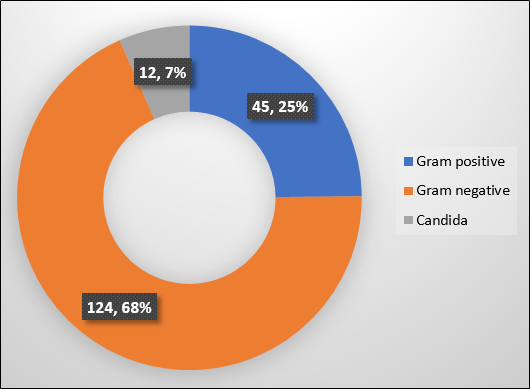 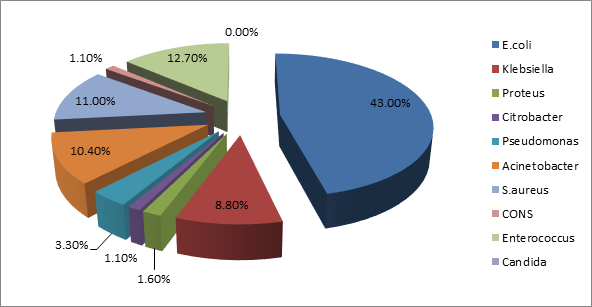 Escherichia coli is followed by Enterococcus spp (13%) isolates similar to the studies conducted with 9.2%,4 9.7%2 and 10.1%.18 Both these organisms are of faecal origin so found responsible to colonize urinary tract and cause infection. In a study,3 Enterococcus spp. is the third common micro-organism with 8.7% isolates. Some studies reported Klebsiella as the second common isolates with 9.3%11 and 9.7%4 prevalence whereas our study reported Klebsiella (8.8%) as the third common micro-organism after Enterococcus spp (13%).

Staphylococcus aureus accounts for 11% prevalence in our study whereas other studies reported 3.3% isolates.3, 13 Some studies reported higher prevalence of 31.4%.19 Proteus (1.6%) and Citrobacter (1.1%) are the least common pathogens reported in our study. Other studies also reported nearly 2% Proteus isolates3, 11, 13 and 2% Citrobacter isolates.3 We have reported only 1.1% Coagulase negative Staphylococcus in the study but it is an important micro-organism found in patients with chronic indwelling urethral catheters.21 The present study reported 6.6% Candida spp whereas another study reported 2.7% isolates causing urinary tract infections.3

In our study, Enterobacteriaceae showed 80-100% sensitivity to carbapenems like meropenem, imipenem and ertapenem. Among the cephalosporins and beta lactam group of antibiotics, there is nearly 50% resistance and among fluoroquinolones, ciprofloxacin and norfloxacin showed up to 70% resistance whereas levofloxacin shows 90% sensitivity. It has been found that beta-lactamase inhibitors like amoxicillin-clavulanate and piperacillin-tazobactam have 90% sensitivity to Enterobacteriaceae members. Nitrofurantoin, the drug of urinary route has good sensitivity for Escherichia coli (98.7%). Among aminoglycosides, gentamicin showed 50% sensitivity whereas amikacin is more sensitive (90%).

Our study is supported by the findings of other studies where high resistance is seen in cephalosporins, beta-lactams group of antibiotics, fluoroquinolones to Enterobacteriaceae whereas high sensitivity to Nitrofurantoin, amikacin and carbapenems.2, 3 In another study, carbapenems and beta-lactamase inhibitors are the promising drugs along with Nitrofurantoin with high sensitivity whereas low sensitivity to fluoroquinolones like ciprofloxacin and norfloxacin(98%).10 It has been suggested that such high resistance of fluroquinolones and beta-lactams group of antibiotics are responsible for multidrug resistant (MDR) which leads to high selection rate of Extended spectrum beta-lactamase (ESBL) producing micro-organisms.10, 22, 23 In studies, similar drug resistance pattern was seen in Escherichia coli isolates with high sensitivity to Nitrofurantoin and Beta-lactamase inhibitors.4, 13, 16, 22

It has been suggested by various studies that Nitrofurantoin is the most recommended drug for patients of UTI. In pregnancy, Escherichia coli is the most common causative agent for urinary tract infections with high resistance to beta-lactams group and fluroquinolones. Nitrofurantoin is also safe to be administered in all trimesters of pregnancy and considered as the drug of choice in UTI among pregnant females.24, 25

Among non-fermenter gram negative bacteria, the present study reported high resistance to third generation cephalosporins (80%), aminoglycosides are moderately sensitive (50-70%) along with fluoroquinolones and amoxicillin-sulbactam whereas high sensitivity to carbapenems (90%). Another study reported high resistance to amoxicillin-sulbactam contrary to our study but other drugs sensitivity pattern for non-fermenters corroborates with our study.

Earlier diagnosis of uncomplicated UTI by symptoms can be controlled by antibiotics without further complications. It has been found that urine culture is usually sent after treatment failure or recurrence of urinary tract infection. The measures should be taken to encourage the collection of urine sample for culture before the start of empirical treatment which should be replaced by specific treatment after the sensitivity report. This study helps to generate antibiotic policy in hospital setup and empirical treatment can be planned accordingly to prevent the indiscriminate use of antibiotics. Hence, prevent multidrug resistance (MDR) micro-organisms to develop which can lead to morbidity and mortality. Awareness should be created among population especially females to maintain personal and environmental hygiene to prevent faecal contamination of urinary tract thus reducing the infection rate and promoting health.