Asymptomatic COVID 19 infection: An innocent bystander in Mucormycosis or maybe not?

We report a case of 48 year old male with past medical history of poorly controlled Diabetes mellitus, Chronic Liver Disease-child Pugh B who came with complaints of left frontal headache and left orbital pain. A clinical diagnosis of possible Rhinorbital Mucormycosis was made and further confirmed by potassium hydroxide (KOH) mount from tissue, which showed broad sparsely septate hyphae and fungal culture grew Rhizopus oryzae. Covid 19 infection was detected as an incidental finding on admission to the hospital. The patient was successfully treated with surgical debridement and liposomal Amphotericin B followed by oral Posaconazole.

The current COVID 19 pandemic is growing rapidly all over the world and a myriad of manifestations and complications are being reported. A wide range of bacterial and fungal co-infections are reported, and many others may have been neglected, missed or misdiagnosed. Mucormycosis is a rare life threatening disease caused by the filamentous fungi of class Zygomycetes and order Mucorales. Various risk factors have been identified including Diabetes mellitus, immunocompromised states like neutropenia, organ transplantation, cancer and iron overload states like hemochromatosis.1 Corticosteroid and Tocilizumab use in severe Covid 19 has been reported recently as a risk factor.2 We describe a case of Rhino-orbital mucormycosis along with a triad of Diabetes mellitus, Chronic liver disease and asymptomatic Covid 19 infection.

A 48-year-old male, shopkeeper by profession came with complaints of left frontal headache and left orbital pain of 5 days duration. He also noticed swelling of left eye along with narrowing. No history of diplopia, fever, nausea, vomiting, nasal discharge or cough. He has past medical history of poorly controlled DM (HbA1C-10.3%) and Chronic Liver Disease-child Pugh B. There was poor compliance to Insulin therapy for Diabetes. On examination there was edema and erythema around the left eye and drooping of eyelid. He was afebrile and vitals were stable. No proptosis, extra ocular movements were full in all directions and pupils were equally reactive. A clinical diagnosis of possible Mucormycosis was made and admitted for further management at IQRAA hospital and research centre, India.

Blood analysis showed a hemoglobin Of 11.8g/dl, leucocyte count of 9,700 lymphocytes 15%, D-dimer was 1423 ng/ml, lactate was 2.2 and RBS 442mg/dl. A Reverse Transcriptase PCR (Truenat) from throat swab was sent as part of screening for COVID 19 and found to be positive. There was no contact history with known Covid 19 infected individual noted. The patient was admitted in COVID isolation ward and MRI orbit with brain was taken, which showed mucosal thickening in left ethmoid air cells and small enhancing focus was noted in the extraconal space of left orbit just adjacent to left ethmoid sinus suggesting possible fungal infection. CT Scan showed two small suspicious areas of bone erosions are noted in lamina papyracea on the left side. No obvious soft tissue extension into the left orbit noted. He underwent left nasal endoscopy and Potassium hydroxide mount (KOH) of tissue obtained showed broad sparsely septate hyphae suggestive of Mucormycetes fungi. Fungal culture from tissue specimen grew Rhizopus oryzae on Saboraud’s dextrose agar after 3 days of incubation at 25℃ (Figure 1). 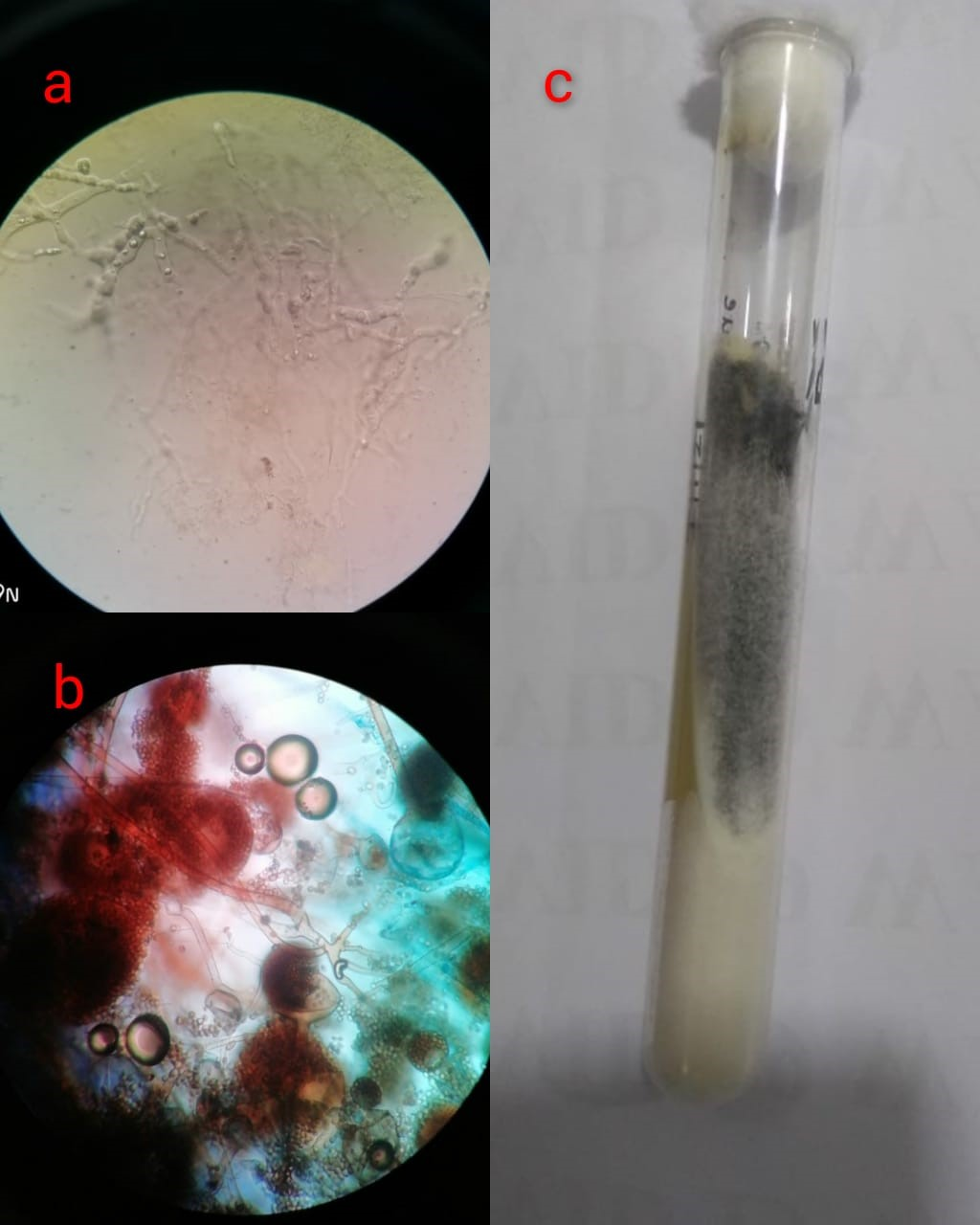 The fungus was identified based on colony morphology and microscopic appearance on Lactophenol cotton blue mount (LPCB). Colonies were fast growing, initially white cottony and became blackish-grey after 4 days of incubation. On LPCB mount, sparsely septate hyphae were observed and sporangiophores were smooth-walled, non-septate arising from stolons opposite rhizoids. Sporangia were globose and bearing sporangiospores

Treatment for Mucormycosis involves systemic anti fungal therapy, surgical debridement and control of underlying predisposing conditions. This patient was started on Liposomal amphotericin B as soon as clinical diagnosis of Mucormycosis was made. He was taken for functional endoscopic sinus surgery (FESS), peroperative findings included lower end of left middle turbinate necrosis and left middle meatus polypoidal tissue. Left middle turbinate excision and left middle meatal antrostomy, anterior and posterior ethmoidectomy were done by ENT specialist.. Later, patient developed hypokalemia and Acute kidney injury (AKI), probably due to Amphotericin B. His urine output was maintained. He also had minimal epistaxis with Hemoglobin drop managed supportively. In the post operative period, he developed sepsis with septic shock and worsening of AKI while receiving 12th dose of liposomal amphotericin B. His blood cultures grew Stenotrophomonas maltophila and urine cultures grew Klebsiella pneumoniae. In view of worsening renal function liposomal amphotericin B was with held and started on oral Posaconazole (300mg 12th hourly for 2 days followed by once daily) For blood stream infection and urinary tract infection, he received Inj Meropenem and Levofloxacin according to sensitivity pattern. Insulin infusion was given for Diabetes mellitus. The patient improved and was discharged after 14 days of hospital admission. Repeat RTPCR testing for Covid 19 was negative. He was discharged on Oral Posaconazole for 6 weeks, Insulin and supportive medications. Follow up visit was uneventful with regards to Mucormycosis.

The spectrum of presentation of SARS COV2 varies from asymptomatic infection to severe ARDS with MODS. The host immune response to the virus can trigger hyperactive immune response in the host resulting in an excessive inflammatory reaction in the form of ‘cytokine storm’ eventually leading to multi-organ failure in severe Covid 19 infection. The virus also directly damage the lung epithelium and impairs cell mediated immunity with reduced CD4 + T and CD 8 + T cell counts. Along with this, widespread use of steroids, broad spectrum antibiotics and monoclonal antibodies as part of treatment against COVID 19 increases the susceptibility to secondary infections including bacterial and fungal infections.3, 4 In asymptomatic Covid infection, drug induced factors are excluded but virus induced immune dysregulation is quite possible. Asymptomatic individuals are known to mount lesser immune response against the virus as such.

Various fungal co-infections in COVID 19 patients include invasive Aspergillosis, Candidiasis and Mucormycosis. Mucormycosis is third most common invasive infection after candidiasis and Aspergillosis. Incidence rate of mucormycosis varies from 0.005 to 1.7 per million population. Most important predisposing conditions for mucormycosis includes poorly controlled Diabetes mellitus with or without Diabetic Ketoacidosis, hematologic malignancies with or without transplant or prolonged and severe neutropenia, immunosupressive drugs and iron overload. India has a high prevalence rate of type 2 diabetes mellitus (8.9% of adults, 77 million) which is a strong predisposing factor for the same.5, 6

Phagocytes are the major host defence mechanism against mucormycosis. Hyperglycemia and acidosis are known to impair the ability of phagocytes to move forward and destroy the organism by both oxidative and non oxidative mechanisms. Mucormycosis is characterized by infarction and necrosis of the host tissue that result from an invasion of vasculature by the hyphae. Most common type of presentation is rhino-cerebral infection. It is frequently rapidly progressive and antifungal therapy alone is inadequate to control the infection. Early surgical treatment whenever possible, in addition to systemic antifingal therapy is recommended.7

On review of literature, we found a few cases reported with the combination of Covid 19 and Mucormycosis and none with asymptomatic Covid 19. Mehta et al. reported a case of Rhinorbital mucormycosis in a patient with severe Covid 19, who developed signs of orbital cellulitis during hospital stay.2 Pumonary Mucormycosis cases along with Covid pneumonia and hyperglycemia was reported by Khan et al. and Garg et al.8, 9

Rhino- orbital Mucormycosis in this patient is presumed to be due to a complex interplay of multiple factors- pre-existing comorbidities of Uncontrolled Diabetes and Chronic liver disease as well as COVID 19 infection contributing to immune dysregulation. Early diagnosis and prompt treatment with surgical debridement and antifungal drugs has resulted in a favourable outcome.