Introduction: With an occurrence ranging from 6-52%, ventilator-associated pneumonia (VAP) is the most common ICU acquired infection, accounting for a significant portion of hospital-acquired infections (HAIs). VAP is pneumonia that develops after a period of more than 48 hours of mechanical ventilation or endotracheal intubation.

Aim: To isolate and identify the potential pathogens causing VAP and to study their antimicrobial susceptibility patterns.

Materials and Methods: Endotracheal aspiration (ETA) or bronchoalveolar lavage (BAL) were collected from patients on mechanical ventilation >48 hours. Bacterial isolates were identified based on culture colony characteristics and biochemical parameters. Antibiotic susceptibility profile was determined for these isolates by Kirby-Bauer disc diffusion method as per Clinical and laboratory Standards Institute (CLSI) 2020 guidelines and studied. The collected data was entered in Excel, and analyzed by using SPSS version 16.

Conclusion: Multi Drug Resistant (MDR) microbes causing VAP are on the increase. The patient population at risk will benefit by the application of the results of this study. The antibiotic resistance pattern of these isolates will aid clinicians in selecting the appropriate antimicrobial agents. Hence, it can lead to decreased mortality and morbidity due to life-threatening VAP.

Hospital-acquired infection (HAI), also known as a nosocomial infection, is an infection acquired while receiving treatment in a hospital that was not present or incubating at the time of entry. Infections occurring beyond 48 hours of admission are usually considered nosocomial.1 In a point prevalence study involving 231,459 patients across 947 hospitals, it was concluded that around 19.5% of patients in the intensive care unit (ICU) had at least one HAI.2

With an occurrence ranging from 6-52%, ventilator-associated pneumonia (VAP) is the most common ICU acquired infection, accounting for a significant portion of HAIs.3 VAP is pneumonia that develops after a period of more than 48 hours of mechanical ventilation or endotracheal intubation. Mortality of VAP has been reported 24-76%, which is higher than those of other hospital acquired infections.4, 5

VAP is an inflammation of lung parenchyma caused by organisms acquired after mechanical ventilation. Colonization of the oropharynx with pathogens, their aspiration into the lower respiratory tract and compromise of the natural host defence mechanisms are the three critical factors in pathogenesis of VAP. Common causative pathogens of VAP include gram-negative bacteria like Acinetobacter baumannii, Pseudomonas aeruginosa, Klebsiella pneumoniae, and Escherichia coli and gram-positive bacteria like Staphylococcus aureus.6

Widespread use of antibiotics in ICUs is a potential cause of emergence of nosocomial infections caused by antibiotic-resistant bacteria.7 Management of VAP is a challenge to the medical team even in modern ICUs. Irrational use of drugs has led to development of antimicrobial resistance which directly impacts the clinical outcome. There is dire need of epidemiological studies on patients on mechanical ventilation, so that there is greater knowledge of local microbial flora and their antibiotic profiles for rational usage of antibiotics. The present study attempts to study the bacteriological profile and resistance patterns of ventilator associated pneumonia.

To isolate the potential pathogens causing VAP and to study their antimicrobial susceptibility patterns.

The prospective study was conducted at the Institute of Microbiology in collaboration with Medical and Surgical Intensive Care Units, Rajiv Gandhi Government General Hospital, Chennai for a period of 9 months (March-November 2020). The study protocol was approved by the Institutional Ethics Committee (No. 19042019) and informed consent was taken from each patient's attendant. The study group included patients of more than 18 years of age admitted in ICU for various reasons who are on mechanical ventilation for > 48 hours.

Patients requiring mechanical ventilation such as

Under strict aseptic precautions respiratory secretions such as endotracheal aspiration (ETA) or bronchoalveolar lavage (BAL) were collected from patients on ventilation. The first sample of ETA was collected after 48 hours of intubation and subsequently samples were collected every 48 hours to see significant colonization. BAL was collected from patients who underwent bronchoscopy for any specific indication. The samples were processed as per protocol using standard microbiological techniques.

Bacteriological media such as Blood agar, Chocolate agar, MacConkey agar by semi-quantitative culture technique by using standard bacteriological loop. Significant growth was considered when >105 colonies for ETA and >104 colonies for BAL.8 Bacterial isolates were identified based on colony characters and biochemical parameters. The antibiotic susceptibility profile was determined for these isolates by Kirby-Bauer disc diffusion method as per Clinical and laboratory Standards Institute (CLSI) 2020 guidelines. Freshly grown bacteria is suspended in 5mL sterile saline to make bacterial inoculums. The surface of Mueller Hinton agar plates was streaked with a sterile cotton swab. The antimicrobial susceptibility pattern was tested using filter paper discs containing a specific concentration of antimicrobial drugs.

During the study period, out of the 250 samples collected and processed from patients on mechanical ventilation for > 48 hours, 40% (n=99) showed significant growth (Figure 1). Among the patients developing VAP, 70% were males and 30% were females (Figure 2). The ages of patients ranged from 18 to 89 years. The predominant age group involved were 51-60 years (21.2%) in both females and males (Figure 3). Of the 99 pathogenic isolates, 97 were found to be gram-negative bacilli and 2 were found to be gram-positive cocci. 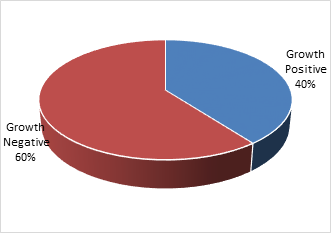 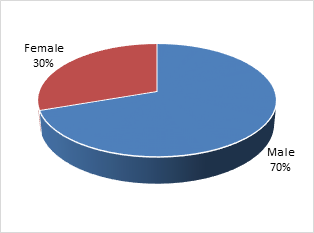 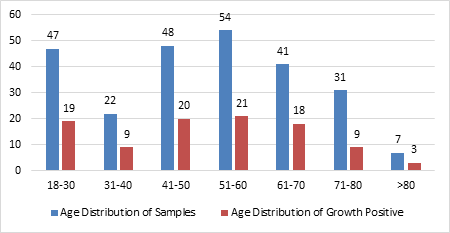 Among the gram-negative isolates, the most common were Klebsiella pneumoniae (32%) and Acinetobacter baumanii (32%). These were followed by Pseudomonas aeruginosa (23%), Klebsiella oxytoca (7%), Escherichia coli (3%) and Proteus mirabilis (3%). The gram-positive isolates were both Staphylococcus aureus (100%) (Figure 4).

The antimicrobial susceptibility pattern observed in gram-positive isolates is as follows (Table 1): Vancomycin (100%), Tetracycline (100%) and Linezolid (100%). This is followed by Cotrimoxazole (50%) and Cefoxitin (50%). Maximum resistance was shown against Penicillin (100%) and Erythromycin (100%). 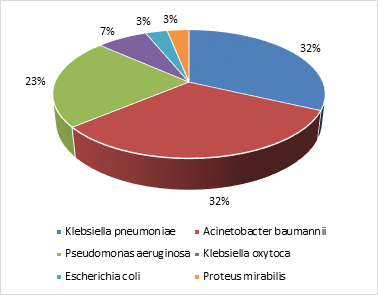 VAP is the most frequently acquired nosocomial infection among ICU patients, with high morbidity and mortality. According to the National Nosocomial Infection Surveillance Program, the incidence of VAP is 7.6 cases per 1,000 patient ventilator days.9

In the present study, out of the 250 samples collected and processed from patients on mechanical ventilation for > 48 hours, 40% showed significant growth. The study conducted by Amit Khelgi et al. in 2017 at south India discussed the role of gram-negative bacterial etiology in ventilator-associated pneumonia.10 This is well correlated with the present study where 98% were gram-negative bacilli and 2% were gram-positive cocci. Among the isolates the most common isolates were Klebsiella pneumoniae (31.31%) and Acinetobacter baumanii (31.31%). This is similar to several Indian studies including the study conducted by Patil HV et al. which was conducted in 2017 at central India.11 The most common age group was reported as 51-60 years (21.2%) which is in consonance with Girish N et al.12 However, based on the data, it seems that age does not contribute notable to acquiring VAP disease as it affected patients in various age groups. With regards to the sex, among the patients affected, 70% were males and 30% females which indicates a higher susceptibility of males to the disease. The same inference was obtained in the study conducted by Alaa M Faraag et al. in 2020 at Egypt.13

Multi Drug Resistant (MDR) microbes causing VAP are on the increase. The patient population at risk will benefit by the application of the results of this study. It will give information regarding the local microbials with their resistance pattern. By distinguishing colonizers from infecting bacteria, the bacteriological approach to VAP control avoids the problem of overtreatment. The antibiotic resistance pattern of these isolates will aid clinicians in selecting the right antimicrobial agents. Complications due to unnecessary antibiotic exposure can be avoided. Finally, mortality and morbidity due to life threatening VAP will decline considerably.

The authors declare no conflicts of interest.