Background and Objectives: Accuracy and promptness in the detection of methicillin resistance are of key importance in ensuring correct antibiotic treatment in infected patients and control of MR staphylococci in the hospital environment. The aim of this study was to detect MRSA phenotypically by oxacillin screen agar and Oxacillin MIC method and to evaluate cefoxitin disc diffusion test as a screening tool for MRSA detection.

Result: Out of 50 Staphylococcus aureus isolates 21 (42%) isolates were detected as MRSA based on MIC method, which is considered as gold standard method for the detection of MRSA. All the isolates of MRSA were 100% susceptible to vancomycin and linezolid. rnIn the present study, cefoxitin diffusion method has given 100% sensitivity and specificity in concordance with MIC method. However, the oxacillin screen agar method showed 95.24% sensitivity and 96.55% specificity.

Conclusion: As per our study and previous reports elsewhere on phenotypic detection of MRSA, cefoxitin is more potent inducer of the macA regulatory system and an accurate surrogate marker for the detection of MRSA in the routine susceptibility testing.

Methicillin resistant Staphylococcus aureus (MRSA) strains emerged soon after the introduction of methicillin into clinical practice. In addition to being a nosocomial pathogen, MRSA has become a community pathogen.1

Accuracy and promptness in the detection of methicillin resistance are of key importance in ensuring correct antibiotic treatment in infected patients and control of MR staphylococci in the hospital environment.2

In the recent past, there have been multiple reports on the use of cefoxitin as a surrogate marker for detection of mec A gene-mediated methicillin resistance.3 Cefoxitin is a potent inducer of the mecA regulatory system.4

Cefoxitin, a cephamycin, is a more potent inducer of the mecA regulatory system than are the penicillins.5 Several groups of investigators have reported that the results of cefoxitin disk diffusion (DD) tests correlate better with the presence of mecA than do the results of disk diffusion tests using oxacillin.6

Need for the Study

This laboratory based prospective cross section study will be carried out in the Department of Microbiology, Navodaya Medical College, Hospital and Research Center, Raichur, Karnataka.

In the present study, a total of 50 Staphylococcus aureus isolates will be evaluated phenotypically for methicillin resistance.

Consecutive non-duplicate isolates of Staphylococcus aureus from various clinical samples received in the microbiology laboratory for bacterial culture and sensitivity from patients admitted in medical and surgical wards and ICUs were included in this study.

A total of 50 strains of S. aureus isolated from clinical samples were used in the study. Confirmation of the strains was done as per standard laboratory procedures using standard tests like catalase, slide and tube coagulase, and growth on Mannitol salt agar.

The MIC for oxacillin was determined by an AD method, following CLSI guidelines. Briefly, for each isolate, a minimum of four to five colonies isolated from an overnight growth were transferred to sterile saline. The suspension was adjusted to a 0.5 McFarland standard (108 CFU/ ml) and spot inoculated on Mueller–Hinton agar plates supplemented with 2% NaCl and containing 256–0.125 µg oxacillin/ ml in serial doubling dilutions. The oxacillin Mueller–Hinton plates were incubated at 35oC for 24 h. The oxacillin susceptibility breakpoint.11

All findings were entered in an MS Excel data sheet and on completion of the study data will be analyzed with a descriptive statistics wherever appropriate. The chi-square and Fisher’s exact test will be used to evaluate the statistical significance of differences in the results. The p-value of <0.05 is considered statistically significant. Statistical analysis will be performed by software package used for statistical analysis (SPSS) version 16.0. 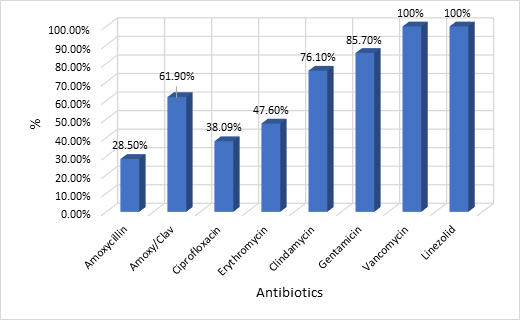 Comparison of four Laboratory methods for detection of MRSA

The knowledge of antibiotic susceptibility pattern and drug resistance in a geographical area might help in the formulation of an appropriate hospital antibiotic policy which is a paramount aspect in the control of hospital acquired infections.

Because of the possible association of MRSA with multiple drug resistance and relatively difficult and higher cost of treatment, the accurate and rapid identification of MRSA is crucial in clinical world for timely management of the infections caused by this superbug.

In the present study, a total of 50 isolates of Staphylococcus aureus from various clinical samples collected between November 2019 and February 2020 were used for the detection of MRSA. The study was conducted in the Microbiology department, Navodaya Medical College Hospital & Research Centre, Raichur, Karnataka. The isolates were identified by routine microbiological procedures like Gram stain, Colony Morphology, Catalase test, tube & slide Coagulase test and mannitol fermentation reaction. Antibiotic susceptibility testing was done as per CLSI Guidelines.

Out of 50 Staphylococcus aureus isolates 21 (42%) isolates were detected as MRSA based on MIC method, which is considered as gold standard method for the detection of MRSA.

The results of susceptibility testing of MRSA isolates to different antibiotics is shown in Figure 1.

All the isolates of MRSA were 100% susceptible to vancomycin and linezolid. However, amoxycillin (28.5%), ciprofloxacin (38.09%) and erythromycin (47.6%) lesser susceptibility to MRSA isolates.

The comparison of four phenotypic laboratory methods for the detection of MRSA are shown in Table 1.

The Oxacillin resistance in S. aureus isolate by Oxacillin screen agar plate method generally means that the isolate is mecA -positive. Occasionally, heteroresistant mecA-positive strain is not detected due to low expression of resistance. Hence, oxacillin screen agar test does not detect borderline resistant strains.13 The present study recorded that the cefoxitin disc diffusion test correlates better with Oxacillin MIC method compared with Oxacillin disc diffusion method, which is in agreement with the report of Cauwelier et al.14 The cefoxitin is better inducer of mecA expression; this could explain why heterogenous MRSA populations variably expressing the mecA are better detected by disc diffusion with cefoxitin than oxacillin, which is a weak inducer of PBP2a production.

As per our study and previous reports elsewhere on phenotypic detection of MRSA, cefoxitin is more potent inducer of the macA regulatory system and an accurate surrogate marker for the detection of MRSA in the routine susceptibility testing. The cefoxitin disc diffusion method can be performed routinely in clinical microbiology laboratory as the test is easy to perform, do not require special technique, equipment and expertise. The method is cost effective as well.

Our study revealed that the cefoxitin disc diffusion method has a high sensitivity, specificity and positive predictive value compared to other routinely used methods for the detection of MRSA.