Inefficiency of use of soap in hard water popularized the use of anionic surfactants namely, branched alkylbenzene sulphonates (BAS) and Linear alkyl benzene sulphonates (LAS) in detergents. The low cost and superior solubility in hard water had made them popular and first choice of many household care-products. However, the disadvantage associated with their use was formation of stable foam over waterbodies which is detrimental for both the aquatic plants and animals. The current study involves primary and secondary screening of LAS degrading organisms and evaluates their potential. The three isolates screened isolate 1 can degrade LAS to the tune of 66% in 5 days, isolate 2 and isolate 3 degrade 72.16% and 68.25% respectively in 4 days.

Soaps are sodium or potassium salts of fatty acids, detergents on the other hand are amphiphilic molecules, having both lipophilic and hydrophilic moieties. The amphiphilic nature of detergents explains the cleansing mechanism. Detergents are also referred to as surfactants. Surfactants such as branched alkylbenzene sulphonates (BAS) were introduced in 1930s and had been an integral part of soaps, shampoos, laundry detergents, dishwash liquids etc. The low cost and superior solubility in hard water had made them popular and first choice of many household care-products.1, 2, 3, 4, 5

The branched chain of BAS undergoes very little if any biodegradation therefore has been substituted by Linear alkylbenzene sulphonate (LAS). Both BAS and LAS are anionic surfactants.3

Further BAS poses environmental hazards as these are responsible for forming large stable foams on water bodies viz lakes, rivers, sea foams (coastal areas). Foam formation by BAS is a major problem and concern sewage treatment. However, the BAS is still used in manufacture of several agrochemicals, in industries where biodegradability is of less significance. Together BAS and Las have an estimated world-wide market of 6 billion kg annually.4, 5

Primary screening of LAS degrading organisms was done by collecting the soil samples from the three local motor mechanic stores situated 18.150663 and 74.576782 with a GPS coordinates of 180 9’ 2.3868” N and 740 34’ 36.4152” E. The soil sample was collected from area which had oily or greasy residue. At least three sites from same location. The upper surface of soil was discarded, soil sample from 3-5 inches depth was procured in sterile bottles.6, 7

Serially diluted sample in saline (0.87% NaCl) was plated on nutrient agar plates and incubated at 370 C for 24 hours in BOD incubator. Replica plating of 10-5 to 10-7 dilution was performed on plates that contained LAS as sole carbon source. Secondary screening for higher degradation potential of microorganism was examined by plating the organisms growing on replica plate two. The replica plate two had phosphate buffered media with 0.001% bromophenol blue as acid indicating dye.8

Growing the bacteria on pilot scale

Immobilization of whole cells in agarose

Two percent agarose gel solution was prepared in phosphate buffer and heated in microwave for solubilizing agarose. Equal volume of cell suspension with cell count 106 cells/ml were impregnated in the gel and thoroughly mixed. The gel containing cells was pipetted in chilled alcohol to form whole cell trapped beads.12

50 ml stock of 1mg/ml reference equivalent to LAS was diluted to 1 litre ddH2O to obtain 50μ/ml working standard LAS solution. Similarly, by dissolving 400 mg of Azure A and 5ml 1N H2SO4 in one litre water Azure A reagent was made. Anhydrous chloroform and 0.2 M phosphate buffer pH 7.2 was used to estimate the LAS degradation. The assay procedure involved by pipetting aliquot of sample/standard in a separating funnel, the same was diluted with 50ml dH2O, addition of 1ml Azure A reagent, 5ml of 0.2M phosphate buffer, 20ml chloroform. Separating funnel was stoppered and vigorously shaken. The chloroform layer was allowed separate for 20 minutes. Azure A forms a blue coloured complex with LAS. The intensity of blue colour developed in chloroform layer is directly proportional to the concentration of LAS and/or anionic surfactant and was measured against chloroform blank at 625nm.13

Primary screening identified 57 isolates in 10-5 to 10-7 dilutions, for plates with lesser dilutions the plates were overcrowded. These plated were labelled as Master plate and was used for replica plating on the plates containing LAS as sole carbon source. 16 isolate had capacity to grow on replica plate.

All the three isolates exhibited same colony characters when grown on nutrient agar plate. The colonies were large, flat, opaque colonies with greenish yellow coloration. The shape of the colonies is irregular and are 3 – 4 cm. The greenish yellow colour of colony may be because of the pyoverdine pigment. Microscopic observation reveals them as rod shaped, Gram negative and motile. Biochemical tests are tabulated as:

The overnight incubated organism (5 ml media in a test tube at 37oC) was inoculated in 250ml nutrient broth in 1000ml flask for scaling up and incubated at 37oC on Orbiteck rotary adjusted to 90 rpm. The fermentation continued till the OD600 of culture was 1 against the uninoculated nutrient broth. OD600 of 1 unit indicated presence of 106 bacterial cells/ml. The culture was used for immobilization.

The immobilized beads were separated from chilled alcohol, dried and subjected to catalase test by dipping the beads in 5% H2O2. The beads that exhibited effervescence indicated the catalase positive bacterial cells entrapped in agarose gel. These were used for LAS degradation.

Standard LAS graph was prepared by plotting concentration of LAS versus absorbance at 653. The result was y = 0.0008x – 0.0301 and R2 value was 0.9817. The standard graph was used to calculate the percent degradation of LAS using the following formula:

2% LAS containing water sample was inoculated with LAS degrading immobilized bacteria entrapped in agarose gel. Concentration of LAS in the sample was determined by the above-mentioned protocol for 7 days. 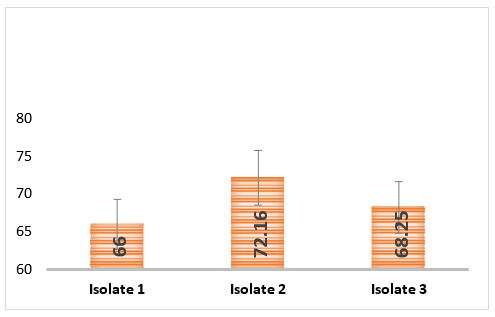 No funding was received for the project and was done as part of dissertation.

To the students, Principal Dr. Bharat P. Shinde and Department of Biotechnology for the support.

LK Wang Colorimetric method for analysis of residual anionic and cationic surfactants, US patent No: US3992149A