Background: Fungal infections are on rise globally owing to use of immunosuppressant drugs for various diseases, increased use of antimicrobials and in-situ devices, long duration of stay in hospitalized patients. There was sharp rise in mucormycosis infections in patients post COVID 19 illness which were previously limited to patients of end stage diabetic ketoacidosis.

Materials and Methods: We studied the epidemiological, clinical, microbiological and radiological aspects for culture positive cases of fungal sinusitis from April 2021 to June 2021.

Conclusion: Along with rhino-orbito-cerebral mucormycosis infections, nasal aspergillosis was also noted as a prominent cause of fungal sinusitis in post COVID 19 illness. As the antifungal therapy for these two fungal infections differs significantly, caution must be adhered to while diagnosing and treating.

SARS CoV-2 virus has spread worldwide and attacks respiratory tract in its progression. The virus causes mild, moderate and severe illness. Antivirals and corticosteroids form a main course of treatment to prevent progression to severe disease, especially in co-morbid conditions. Fungal sinusitis, post COVID 19 infection and corticosteroid therapy, are on rise. These mainly involve infections by Aspergillus species and Zygomycetes. Both fungi being angioinvasive in nature, have been implicated in progression of disease to involve rhino-orbito-cerebral area. Mucormycosis causing fungi are saprotrophic in environment and infections are seen in host whose immunological defense mechanisms are weakened. Neutrophils play a major role in defense against mucormycosis, aspergillosis, disseminated candidiasis. Also, macrophages kill the fungal spores by oxidative damage. Opportunistic fungal infections are seen in cases of severely ketoacidotic diabetes mellitus where monocyte/macrophages are dysfunctional, leukemia and other malignancies where granulocytopenia is present. Patients on immunosuppressive therapy such as long term intake of corticosteroids and also those on voriconazole prophylaxis have been reported to present with mucormycosis infections.1 The primary reason that appears to be facilitating Mucorales spores to germinate in people with COVID-19 is an ideal environment of low oxygen (hypoxia), high glucose (diabetes, new onset hyperglycemia, steroid-induced hyperglycemia), acidic medium (metabolic acidosis, diabetic ketoacidosis [DKA]), high iron levels (increased ferritin) and decreased phagocytic activity of white blood cells (WBC) due to immunosuppression (SARS-CoV-2 mediated, steroid-mediated or background co-morbidities) coupled with several other shared risk factors including prolonged hospitalization with or without mechanical ventilation.2

In Microbiology Laboratory, the specimen were immediately processed for KOH (Potassium Hydroxide) mount, Gram stain and Fungal Culture according to the requisition. For those specimen in which fungal culture request was awaited, the specimen were maintained at room temperature as refrigeration halts growth of Mucorales.

The specimens were inoculated on two Sabouraud’s Dextrose Agar (SDA) slants, one incubated at 37°C and another at room temperature. From a fungal growth observed, slide culture was prepared on SDA cube and incubated at room temperature in wet chamber, observing for sporulation on alternate days. Lactophenol Cotton Blue mount was prepared from the growth obtained and microscopic examination was done to diagnose and differentiate fungal species.

Fungal infections post COVID 19 illness were seen mostly in age group of 35 years to 70 years. The treatment of COVID 19 illness invariably included steroids for all these cases. 90% of the cases (n=9) were treated with antiviral Remdesivir. One patient received Inj. Tocilizumab to combat cytokine storm whereas another received Inj. Baricitinib for the same. Oxygen supply was given to 90% of these cases (n=9). Duration between COVID positivity and appearance of symptoms of fungal sinusitis ranged from as less as 7 days to as long as 37 days. Symptoms of fungal sinusitis leading to deeper tissue invasion included headache, sinus pain, mucopurulent discharge through nose, ptosis, proptosis, vision loss and facial palsy.

Laboratory and investigations in post COVID 19 suspected cases of mucormycosis. 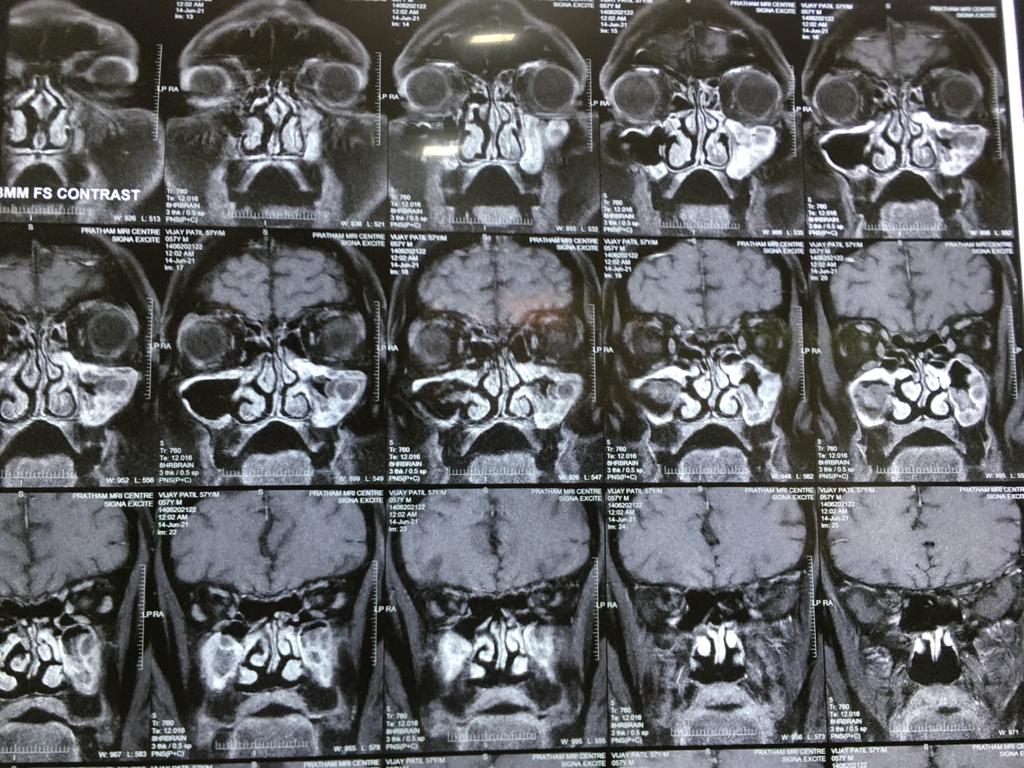 Sporangia of Rhizopus arrhizus in KOH mount of nasal tissue 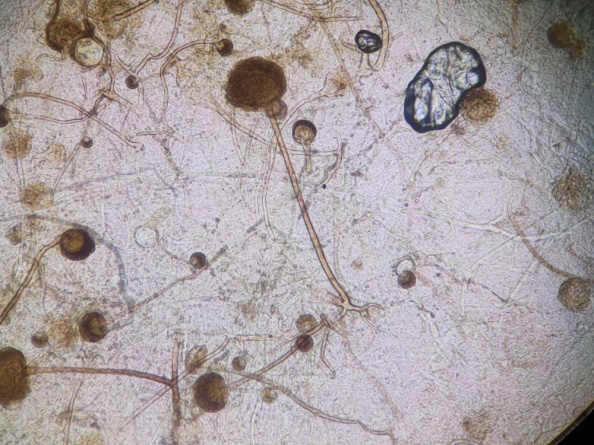 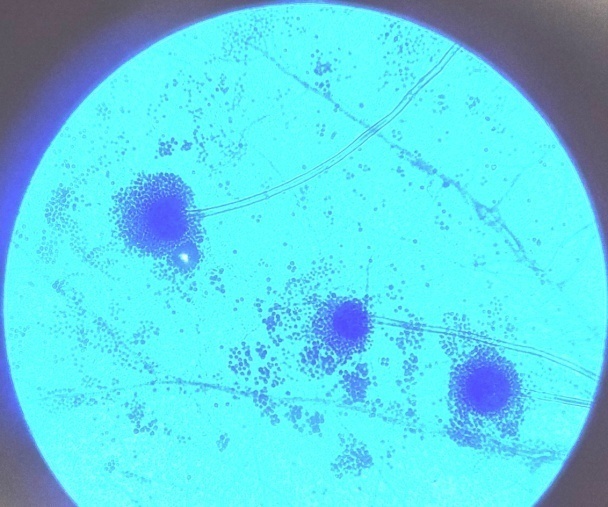 Surgical removal of infected tissue was done for all cases which included maxillectomy, ethmoidectomy, septectomy. Radical debridement was carried out wherever required and included orbital clearance for one patient. Surgical management was accompanied with Inj. Liposomal Amphoterecin B or Inj. Amphoterecin deoxycholate 5mg/kg for 3 to 4 weeks followed by Tab. Posaconazole 300 mg for 3 to 4 months. All of the cases improved on treatment except one patient succumbed. 20% of the patients (n=2) developed cerebral mucormycosis as evident on MRI are maintained on Tab. Posaconazole and improving.

The Colonization by wide variety of opportunistic pathogens by exposure to high concentration of spores in closed environment has been cited in animal infections.4 There too was a speculation that oxygen masks and/or nasal canulae were not disinfected satisfactorily which lead to exposure of Mucormycetes spores directly to patient’s sino-nasal area. In our study too, 90% of the cases (n=9) were given external oxygen supply to maintain saturation levels. Not only did the specimen from these patients grew Mucormycetes species but also Aspergillus and Penicillium.

Steroids are being used for treatment of various diseases since long but recent upsurge of mucormycosis infections in patients suffering from COVID 19 has alarmed all of us for a more controlled and cautious use of this wonder drug ensuing de-escalation as early as possible. Hyperglycemia is a known side effect of steroid drug and it is the side effect implicated in mucormycosis infections more along with pathophysiology of Sars-CoV-2 in current scenario. Also, diabetes mellitus is an established co-morbidity for Sars-CoV-2 virus infection. All cases (100%) in our study were prescribed with steroids (n=10). Also, 100% (n=10) either had history of diabetes mellitus with poor glycemic control (66.6%) or altered hemo-glucose test owing to steroid use (33.4%). Our findings were similar to those of Mishra N et al. who mentioned 80% of cases had pre-existing diabetes mellitus. However only 60% of patients from their study were treated with steroids.6 Immune suppressants such as tocilizumab and baricitinib were also used in 20% (n=2) of our patients which added to suppression of T and B cells, in addition to lymphopenia caused by Sars-CoV-2 infection and inhibition of neutrophilic migration to site of inflammation due to inhibition of cytokines by steroids.

The mean age of our patients was 55.4 years (range 38 to 70 years) which is very similar to that of Mishra N et al.9 Median duration for onset of symptoms of mucormycosis infection from onset of COVID 19 illness in our study was 15 days (range 7-37 days).

We came across one peculiar case wherein despite high index of clinical suspicion of mucormycosis, sinus tissue on KOH mount revealed septate hyphae and grew Aspergillus flavus on two occasions but inspite of surgical debridement and standard treatment with voriconazole, the patient continued to progressive disease involving orbit. Tissue from orbital decompression on KOH mount revealed scarce presence of aseptate hyphae suggestive of mucormycetes. The patient was again administered with Liposomal Amphoterecin B along with orbital clearance but succumbed to his illness. This patient also had homolateral facial palsy which is a feature of acute rhinocerebral mucormycosis.5 Multiple cranial nerve involvement in mucormycosis infection has been reported by Paul S et al.10 In our study, two patients having mucormycosis infections developed facial palsy.

Also, aspergilloma of the nasal sinuses have been reported to eventually involve orbit of the eye.11, 12 Intracranial invasion has also been reported with invasive Aspergillus sinusitis due to its proximity. The outcome is usually fatal if not treated properly.13, 14

Aspergillus species are increasingly getting isolated in tissues from fungal sinusitis cases along with Mucormycetes species post Sars-CoV-2 infections. Treatment of choice for mucormycosis infection is Amphoterecin B whereas for Aspergillus infections, voriconazole is drug of choice. Timely management is key to good prognosis in these patients. Hence, nasal aspergillosis too should be promptly reported and vigorously treated along with rhinocerebral mucormycosis infections.