Aims and Objectives: This study was aimed to estimate the ANA positivity rates among patients with suspected or confirmed auto immune diseases and to determine the common ANA IIF patterns in the positive samples.

Materials and Methods: This is a retrospective study including 235 patients with either clinical suspicion of, or suffering from autoimmune diseases attending a tertiary health care hospital in Puducherry, South India, between November 2018 and April 2020. ANA IIF test (Hep 20-10/ primate liver, Euroimmun, Germany) was performed with 1:100 dilutions of patient serum.

Conclusion: A significant ANA positivity rate was found in our study and a detailed clinical study has to be conducted to draw further conclusions.

Anti-nuclear antibodies (ANA) are known to be associated with autoimmune diseases and most commonly with connective tissue diseases (CTD). Screening for ANA is the first step in the diagnosis of autoimmune diseases. Indirect immunofluorescence (IIF) test using Hep-2 cells is considered as the gold standard method for detection of ANA. Since the Hep-2 cell based test allows detection of antibodies to various other cellular fractions also, the term anti-nuclear antibody test has been replaced by anti-cell antibody test.1 To avoid confusion, the term ANA has been used throughout this article. IIF test, in contrast to solid phase assays also has the advantage of providing specific patterns which has clinical relevance.2 The prevalence of autoimmune diseases and hence the ANA positivity and ANA IIF patterns differ in different geographical locations.

This study aims to estimate the ANA positivity rates among patients with suspected or confirmed autoimmune diseases and also to determine the common ANA IIF patterns.

This was a retrospective observational study conducted over 18 months period from November 2018 to April 2020 at a tertiary health-care centre in Puducherry. Ethical clearance certificate was obtained from the Institutional Ethical Committee (Study no. EC/33/2020 dated August 3, 2020). A total of 235 specimens from patients with suspected or confirmed autoimmune diseases were received during the study period with a request for ANA IIF test. ANA IIF test (Hep 20-10/ primate liver, Euroimmun, Germany) was performed with 1:100 dilutions of patient serum. The data for the study such as age, gender and ANA IIF test results were retrieved from the lab information system (LIS).

The ANA positivity rates and common ANA patterns were expressed in frequency and proportion. The association of ANA positivity with gender and age were analysed using the chi square test.

The ANA positivity rate was 14.5% (34 out of 235 samples were positive). ANA was positive in 10 (13.3%) males and 24 (15%) females. The mean age of ANA positive patients were 43.4 years. The most common pattern was nucleus fine granular followed by cytoplasm fine granular and centromere. (Table 1) Few nuclear, cytoplasmic and mitosis patterns observed in our study are shown in (Figure 1). 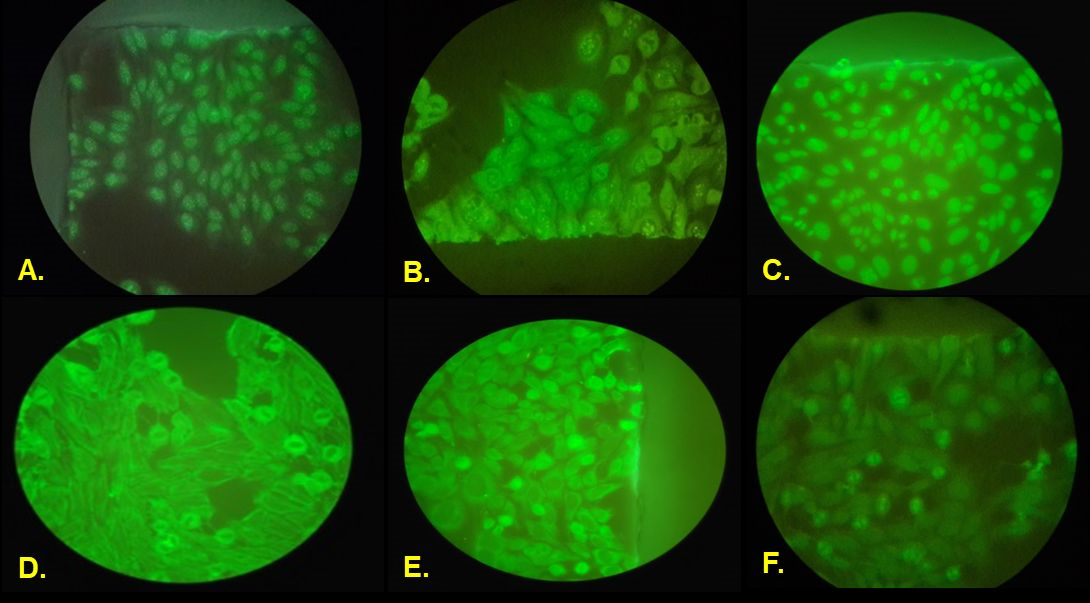 ANA testing is commonly used for the diagnosis of autoimmune diseases. In fact, the European League Against Rheumatism (EULAR)/American College of Rheumatology (ACR) has recently recommended ANA to be used as the first criteria to classify systemic lupus erythematosis (SLE).3 Though solid phase assays for ANA like ELISA have the advantage of objective results, many studies have proven IIF test to be superior to ELISA.4, 5

In our study we found that the nucleus speckled was the commonest followed by cytoplasm fine granular and centromere. The study by Pachaiyappan V et al. in South India also found that the most common pattern was nucleus speckled.6 Where as, studies by Jacinth Angel et al. and Sebastian W et al. in South India showed that nuclear homogenous pattern was the common pattern.5, 7 Different patterns are found to be associated with specific autoimmune diseases. The reasons for varied occurrence of patterns in different geographical areas may be attributed to the varied prevallance of autoimmune diseases in that region.

This is only a pilot study aimed at determinining the ANA positivity rates in our geographical location. Since significant positivity rates (14.5%) were found, further detailed studies are needed to correlate with the clinical findings of the patient.

A significant ANA positivity rate was found in our study and a detailed clinical study has to be conducted to draw further conclusions.