Materials and Methods: Aerobic bacterial isolates from urine samples submitted to microbiology laboratory for culture were included in the study. The isolates were tested for biofilm formation by Congo red agar method and Christensen tube method. Antimicrobial susceptibility tests were performed on these isolates by Kirby Bauer disk diffusion method as per CLSI guidelines. A total of 293 Gram negative bacilli and 59 Gram positive cocci were tested for biofilm production and antimicrobial susceptibility testing.

Urinary tract infections (UTIs) are one of the most important causes of morbidity and health care spending, affecting persons of all ages.1 Urinary tract infections (UTI) pose a serious health threat due to the high recurrence rates and antimicrobial resistance in the causative agents.2 The risk of developing urinary tract infection increases significantly with the use of indwelling devices such as catheters and urethral stents.3 Biofilms are an assembly of microbial cells formed by single or a mixture of bacterial species that are irreversibly associated with a surface and enclosed in a matrix of polysaccharide materials that allow the growth and survival in hostile environments. Biofilms confer advantages to the biofilm forming bacteria, such as protection from antimicrobial agents, exchange of nutrients and metabolites, and/or genetic exchange between organisms. Limited penetration of antibiotics into the biofilm and slow rate of cell multiplication of organisms in the biofilm may contribute to the development of chronic infections.3 Biofilm can be found in the urothelium, renal stones, and implanted foreign bodies.1, 3 Several studies observed that most of the urinary isolates collected from patients with relapse infections were biofilm producers “in vitro”. Relapse by uropathogenic Escherichia coli (UPEC) has been related to the ability of pathogenic strains to form biofilm. In these cases, biofilm production may be the key determinant for the persistence of UPEC in the vaginal reservoir, the bladder epithelial cells or both.1

Aerobic bacterial isolates from urine samples collected from all clinically suspected patients of urinary tract infection admitted in IPD and attending OPD who are willing to participate in the study.

Fungal isolates. Patients not willing to participate in this study.

Informed consent from all the patients included in the study was taken prior to initiation of the study.

Mid‑stream, clean catch urine samples from non-catheterised patients and aseptically aspirated urine of catheterised patients, submitted to Microbiology laboratory for aerobic bacterial culture, were included in the study. All samples were processed for aerobic bacterial culture by inoculating on blood agar, Mac-Conkey agar and Congo red agar by semi quantitative method.4 The growth on these media were observed and analysed after incubating for 24 hours at 37°C. The isolates grown on blood agar and/or Mac-Conkey agar were identified based on the colony morphology, Gram’s staining and standard biochemical tests. The growth on Congo red agar (CRA) was observed for black colour. Antimicrobial susceptibility testing for all the isolates was performed by Kirby-Bauer disc diffusion method as per the CLSI 2017 guidelines.5 Biofilm detection was done by using Congo red agar method6, 7 and Christensen’s tube method.8

The colony of the isolates grown on blood agar or Mac-Conkey agar was inoculated on Congo red agar plate. Congo red agar was prepared as per the method described by Freeman et al. (1989).6 The urine samples were inoculated on Congo red agar medium and after overnight incubation, colonies were observed. The growth on CRA was observed after overnight incubation at 37°C for 24 hours. The black colonies with dry metallic consistency were considered as positive test (slime producers). Non slime producers usually remained pink.7 (Figure 1) 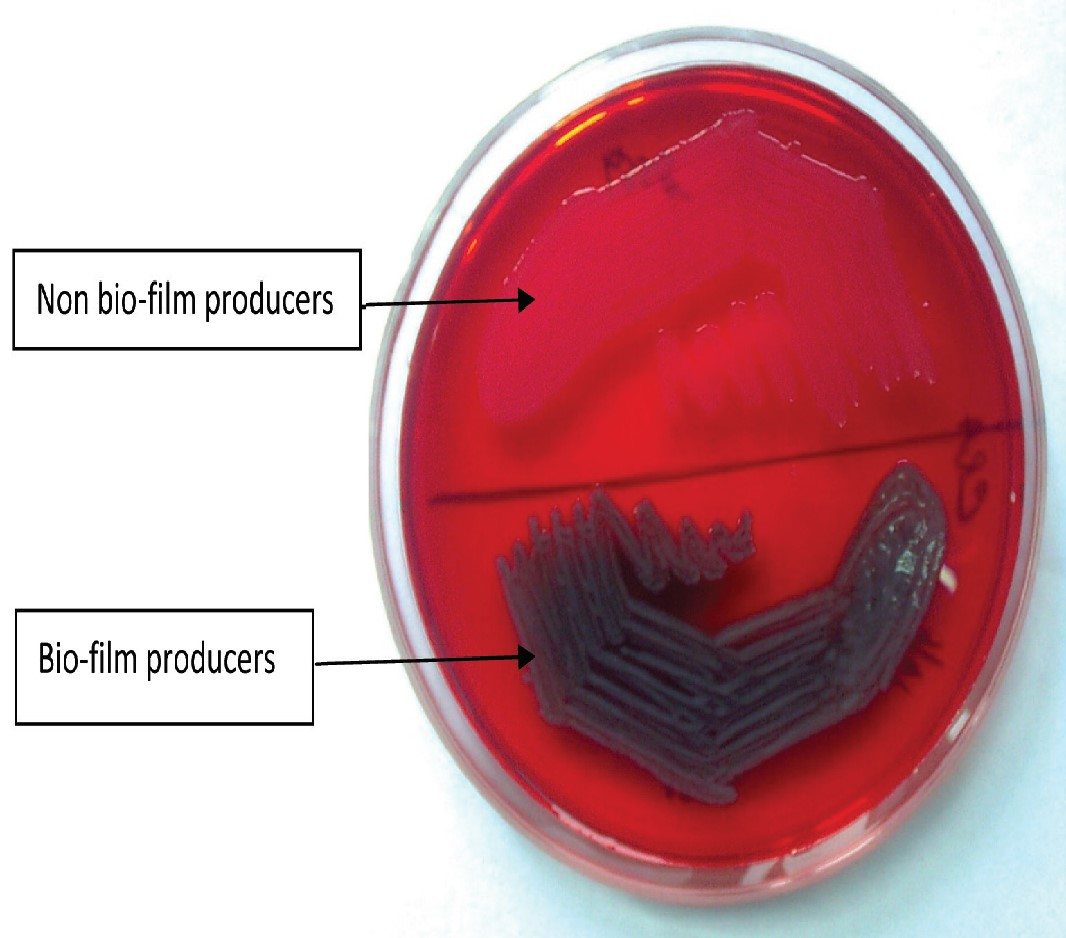 The method used was the one which was described by Christensen8 et al 1982. The colonies on blood agar and MacConkey agar were inoculated in tryptic soy broth with one percent glucose. After overnight incubation, the tubes were decanted and washed three times with phosphate buffered saline to remove planktonic flora and then stained with safranin. The visible pink film lining inside the tube was considered as positive test. The line at liquid air interface though stained pink was not considered as positive result.8 (Figure 2) 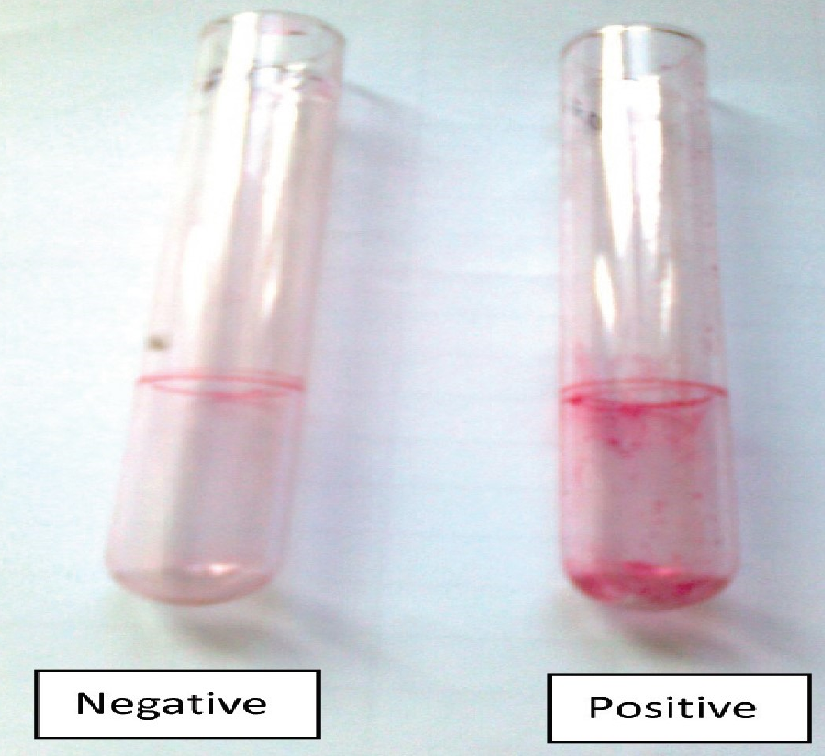 Data was entered into Microsoft excel data sheet and was analysed using SPSS 22 version software (IBM SPSS Statistics, Somers NY, USA). Chi-square test was applied to test whether difference between values is significant. p value (Probability that the result is true) of <0.05 was considered as statistically significant after assuming all the rules of statistical tests.

Antimicrobial susceptibility pattern of Enterobacteriaceae isolated in the study shows that highest percentage sensitivity of the isolates (both biofilm producers as well as biofilm non producers) was observed to nitrofurantoin (81.92%), amikacin (79.23%) and imipenem (72.3%). (Table 3). The percentage susceptibility of Pseudomonas aeruginosa was found to be highest for piperacillin tazobactam (78.57%), amikacin (71.42%), imipenem (64.28%) and ceftazidime (64.28%). (Table 4).

Amongst Gram positive cocci, the percentage susceptibility was found to be highest for nitrofurantoin (72.88%) followed by cotrimoxazole (42.37%) after vancomycin, linezolid and teicoplanin for which none of the isolate was found to be resistant. (Table 5)

Biofilm producing strains of all the isolates displayed higher percentage resistance to almost all tested antimicrobials than biofilm non producers.

Urinary tract infections are a serious health threat with biofilm production being the prime cause for antibiotic resistance as well as recurrent infections.

In present study Gram negative bacilli accounted for 83.24% of cases and Gram positive cocci caused 16.76% of urinary tract infections. Escherichia coli (55.12%) was the commonest isolate found in urinary tract infection followed by Klebsiella pneumoniae (13.06%) and Enterococcus spp. (10.24%). These findings correlate well with the findings reported in studies conducted by Subramanian et al. (2012), Behzadi et al. (2010) and Noor et al. (2013).9, 10, 11 The predominance of these bacteria in causing urinary tract infection is due the fact that they are the predominant gut flora and can easily contaminate the urethral meatus and can ascend to the bladder. In addition, the ability of the uropathogenic Escherichia coli (UPEC) to cause symptomatic UTIs is associated with the expression of a variety of virulence factors, which include adhesins (e.g., type 1 and P fimbriae) and toxins.12 The other Gram negative bacilli isolated were Pseudomonas aeruginosa (8.23%), Proteus mirabilis (1.98%), Citrobacter koseri (1.14%) and Acinetobacter baumannii (1.14%).

Garcia et al (2004) have suggested that detection of slime production by the modified Christensen method and the Congo red agar method showed adequate positive predictive values (all above 80%) and they may therefore be useful in clinical decision making. They also concluded that Congo red agar method is less laborious, quicker and requires less equipment than tube method and it would be very useful in clinical microbiology laboratories.13 However, we feel that both the methods i.e. Christensen’s tube method and Congo red agar method are simple, cost effective and reproducible with an only disadvantage of subjective interpretation in case of tube test which can be eliminated by using spectrophotometric reading.

In this study 94 organisms were isolated from catheterized patients, of which 66 (70%) were found to be biofilm producing, while 101 (39%) of the 258 organisms isolated from the non-catheterised group were biofilm producers. The p value for biofilm formation in catheterised vs non-catheterised patients was found to be 0.001, which is highly statistically significant. This has been attributed to the fact that the catheter surface makes it an ideal site for bacterial attachment and biofilm formation.

In the present study the rate of biofilm production on the third and fifth days of catheterisation was 31.57% and 58.33% respectively. It increased further to more than 80% after the fifth day of catheterisation. This finding suggests that the chances of biofilm formation increases with the duration of catheterization. Longer the catheter remains in place; more are the chances of biofilm formation which correlates with studies by Tayal RA et al, Sabir N et al and Neeli VH et al.3, 14, 15 This may be because the longer time the catheter remains in the urinary system, it is highly likely that bacteria can colonize, accumulate in the residual urine in the bladder, adhere or aggregate, and form complex communities of bacterial species called biofilms.

Biofilm production on in-dwelling urinary catheters has been reported in a large number of studies conducted all over the world and is a major cause of nosocomial and recalcitrant UTI. The Catheter Associated Urinary Tract Infection (CA-UTI) number upsurges every year since urinary catheters are the second most often used and internally placed human body foreign objects through which the causative organisms more easily attack the urinary tract and urinary bladder. Biofilms readily form on the inner or outer surfaces of these tubular latex or silicone devices.14 The ability of bacteria to form biofilms on medical devices, e.g. catheters, is believed to be a major role in the development of nosocomial infections, including catheter-associated urinary tract infections.16

In the current study, we investigated antibiotic susceptibility patterns of biofilm producers and biofilm non producers against the drugs currently used in therapy of UTI. Almost all the biofilm producing isolates displayed relatively less percentage of susceptibility to tested antimicrobials than biofilm non producers. The resistance to antimicrobials in biofilm producing organisms may be due to the delayed penetration of the antimicrobial agent, changes in microbial growth rate, metabolically inactive bacterial cells and other physiological alterations related to the development of the biofilm.3

The fact that biofilm producers are more likely to be resistant to various antimicrobials, underscores the importance of early detection of biofilm production in a pathogen. If this information is received, as early as possible, it would aid in selecting the appropriate antimicrobial for treatment. In our study we attempted to provide this information at the earliest (within 24 hrs) by inoculating the urine sample on Congo red agar.

Antimicrobial resistance is an issue of global concern, and biofilm producing isolates show higher antimicrobial resistance as compared to biofilm non producers, as was evident in our study. Early information about the biofilm production by the infecting pathogen, by routine inclusion of detection methods in the laboratories, may be helpful in aiding the clinicians in deciding the appropriate empirical antimicrobial for the treatment of urinary tract infection. A simple method of inoculating the urine sample on Congo red agar along with the other routinely used media can serve as a simple, rapid and cost-effective way of providing this information at the earliest.