Singhal, Rati, and Jaggi: C-reactive protein as a diagnostic marker of neonatal sepsis in association with blood culture a retrospective study at a tertiary care hospital

Introduction: To evaluate the sensitivity and specificity of C-Reactive protein as a single diagnostic inflammatory biomarker of neonatal sepsis in association with the blood culture.

Material and Methods: In this study, we retrospectively reviewed the medical records of 330 neonates at a tertiary care hospital at Gurugram from Jan, 2015 to Dec, 2020. The study population included neonates <1month age. Neonates meeting the IPSC criteria (Sepsis 2.0)1 and with a positive culture were considered as neonates with proven sepsis. Neonates with congenital malformations and congenital infections associated with TORCH complex were excluded from the study.

Results: Of the 330 neonates screened for sepsis, 32 (10%) had a positive blood culture with raised CRP in 69 (21%) cases. Among the 32 cases with positive blood culture, CRP identified 29 cases. The sensitivity, specificity, positive predictive value, negative predictive values of CRP were 90.6%, 86.5%, 42% and 99% respectively. The area under the curve (AUC) for the CRP ROC analysis was 0.83 with sensitivity of 90.6% and specificity of 91.6% which showed CRP usefulness as the diagnostic inflammatory biomarker of neonatal sepsis.

Conclusion: C-Reactive protein was found to have a high diagnostic value in terms of sensitivity of 90.6% and specificity of 91.6% when 0.83 is used as a cut off point for diagnosis of neonatal sepsis. Therefore, CRP could be used as diagnostic inflammatory biomarker in resource poor settings.

Neonatal sepsis is systemic blood stream infection of neonates during their first month of life. It is either early onset (< 72 hrs) or late onset (>72 hrs).1 It is the leading cause of morbidity and mortality in neonates worldwide, therefore early diagnosis and timely management is the need of the hour.

The presentation of the clinical signs of sepsis is highly variable and non-specific which makes it difficult to distinguish it from other non- infectious conditions like transitional tachypnea and apnea of prematurity.2

The diagnosis of neonatal sepsis (NS) is made with Systemic Inflammatory Response Syndrome (SIRS) in presence of a confirmed infection by a positive blood culture, or probable infection by a complete review of clinical, laboratory and radiological data.3 Blood culture is currently the gold standard for the confirmation of the diagnosis of sepsis.1 However, it has its own limitations such as low sensitivity and culture reports are time consuming. Incessant administration of broad spectrum antibiotics, empirically adds to increased resistance to drugs within bacterial population altering the gut micro biome making neonate susceptible to conditions like necrotizing enter colitis (NEC) and invasive fungal infections.2 It also adds to the cost and lengthening of the hospital stay of the patient.

It is therefore imperative to detect reliable biomarkers for its early diagnosis and management. The Committee of Fetus and Newborn of the American Academy of Pediatrics (AAP) in their statement on infants with suspected or proven sepsis have expressed agreement in the utility of inflammatory biomarkers. Various traditional and newer biomarkers have been identified to aid in early diagnosis of NS such as Hematological indices, C-reactive protein (CRP), Cytokines and chemokines, CD64, Procalcitonin (PCT), biophysical markers to name a few.2

PCT is a prohormone of calcitonin. Whereas calcitonin is only produced in the C cells of thyroid gland as a result of hormonal stimulus, PCT is secreted by different types of cells from numerous organs in response to proinflammatory stimulation, particularly bacterial stimulation.3

In addition to physiological rise following birth, a rise in PCT can also be triggered by other perinatal events, such as respiratory distress syndrome etc.4 Bacterial or fungal infection results in a much more marked rise in PCT that can be detected within 6 hours of infection, peaking at 18–24 hours. Levels remain elevated for up to 48 hours, allowing for a relatively wide window for detection.4 PCT as an intermediate- to early-rising inflammatory marker is of limited use in detection and early diagnosis of NS.2

However, CRP is an acute phase reactant, released from the liver in response to infection or inflammation. It may raise as much as thousand folds within 4-6 hours of an inflammatory process, hence should be performed within 6-12 hours of onset of inflammatory response.5, 6 Its level peaks at around 48hours and declines at a half-life of 19 hours as the infection subsides.7

Various studies suggest combination of CRP value with various hematological indices, such as I:T ratio and other biomarkers such as nCD64, IL6, or IL8 to ease in “ruling out” sepsis and limiting the course of treatment.4 Although other biomarkers such as PCT may also be used, CRP has been described as a later but more specific marker of infection. However, it has been shown that no combination of biomarkers performs well in diagnosing sepsis like CRP alone.8 In summary, CRP is a useful negative predictor of NS and serial levels are valuable in helping clinicians monitor response to treatment and decreasing antibiotic use. Unlike blood culture CRP concentration is not affected by a prior taking of antibiotics.9

Multidrug and pan drug resistance is a challenging problem being faced by the clinicians nowadays, particularly in developing countries. Neonatologists who supervise neonatal intensive care unit (NICU) find it hard nut to crack and mange neonatal infections due to altered pattern of microbial flora.10 Hence, the knowledge of microbiological profile and its antibiotic susceptibility pattern is of great use to paediatricians in choosing antibiotics optimally to treat neonates with septicemia. Rational empiric treatment with broad spectrum antibiotic coverage for both gram positive and gram negative organisms should be started. Antibiotics should be re-evaluated when the results of the cultures and susceptibility are available.

Here we present a retrospective study from a tertiary care hospital in Gurugram to assess the role of CRP as an inflammatory biomarker for the diagnosis of neonatal sepsis.

We carried out a retrospective study by analyzing the data at a tertiary care hospital, Gurugram from Jan, 2015- Dec, 2020. Neonates suspected with sepsis, according to the International Paediatric Sepsis Consensus criteria (IPSC) definition (sepsis 2.0), were included. Neonates meeting the IPSC criteria and with a positive blood culture were considered as neonates with proven sepsis.11 Neonates with any history of congenital malformations and congenital infections associated with TORCH complex were excluded from the study.

The medical records of 330 neonates were reviewed over a period of 5 years. Thirteen neonates did not meet the inclusion criteria, hence were excluded from the study.

For each patient, the following information was extracted: Demographic data, clinical symptoms, Complete Blood Count at admission, level of CRP and the outcome of the patient. Statistical analysis was carried out using (SPSS) version 21 software.

CRP was measured using IN VITROS CRP multilayered slide, in sandwich immunoassay format in human serum or plasma. In this format a derivative of phosphorylcholine (PC) is covalently bound to polystyrene polymer beads and in the presence of calcium serves as a capture agent. Monoclonal anti-CRP antibody conjugated to horseradish peroxidase (HRP) serves as a signal generator.

The cutoff of CRP≥1mg/dl was used and considered as positive. This was the optimal value for detecting a neonate with sepsis taking blood culture as gold standard. 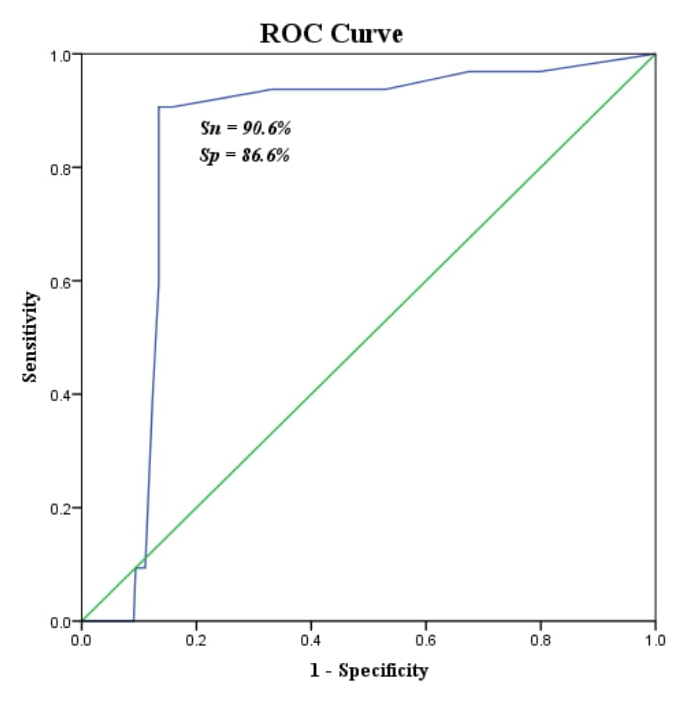 Tachycardia (100%) and respiratory distress (98%) were most commonly observed in patients with neonatal sepsis (Table 3). However, the most common complication observed with positive blood culture were exaggeration of neonatal Jaundice(97%) and increased blood sugar (100%) levels (Table 3).

Of the 32 neonates with positive blood culture, the most common bacteria isolated was Klebsiella pneumoniae in 11 (34%) cases, Candida species in 5 (15%) cases and Enterobacter cloacae in 4 (12%) cases (Figure 2). The CRP was positive in 90% of the cases with proven bacteria (Table 4). Both, early and late onset neonatal sepsis were taken into account. The susceptibility profile of most common pathogen, Klebsiella pneumoniae isolated from positive blood culture showed 73% susceptibility to Ciprofloxacin followed by cefixime, fosfomycin, gentamicin, polymixin B (Figure 3). Three isolates were ESBL producers. All the isolates were resistant to Penicillins, First and Second generation cephalosporins, aztreonam. 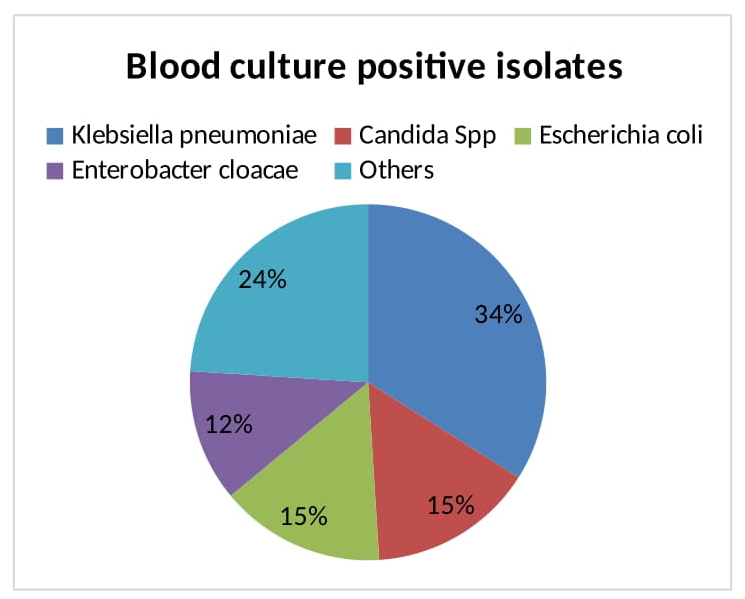 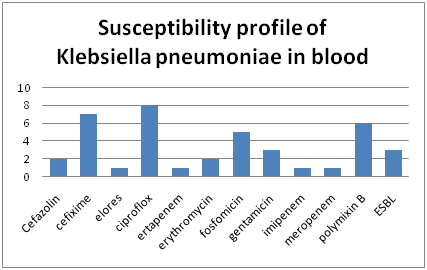 Statistical analysis of CRP in neonates with blood culture

Clinical symptom in the sepsis group

In this study, the CRP identified 29 out of 32 neonates with positive blood culture with a sensitivity of 90.6% and positive predictive value of 42%. This implies that a positive CRP will correctly diagnose about 9 of 10 neonates suspected with sepsis. These findings are similar to a study done by Bunduki et al where the sensitivity and positive predictive value of CRP in identifying neonatal sepsis with positive blood culture were 95.7% and 70.2% respectively.13

In this study, three cases with proven sepsis had a negative CRP. This can be explained by the fact that CRP has the ability to decrease with the rate of resolving of tissue damage.14

Considering negative predictive value, CRP could be useful biomarker in decision making of discontinuation of antibiotic therapy, if clinical features of sepsis are absent. This is consistent with the American Academy of Pediatrics Committee on Fetus and Newborn recommendation that bacterial sepsis is unlikely with normal CRPs and antibacterial agents may be discontinued.17 This leads to shortening of hospital stay thereby reducing healthcare cost, family anxiety and health-care associated infections.

Although, CRP shows its usefulness in the diagnosis of neonatal sepsis, it does not substitute the blood culture.18 The sensibility of CRP may vary according to qualitative or quantitative method used. In this study, quantitative method was used and the positive cut-off of CRP≥1mg/dl.

However, CRP has been studied for diagnostic value in neonatal sepsis, the results of the present study showed sensitivity and specificity of 90.6% and 86.5% respectively. In the present study, we attempt to determine the best cut-off point for CRP using ROC curve at which it can yield the best diagnostic sensitivity and specificity. A CRP level >1mg/ml has a sensitivity of 90.6% and specificity of 86.5%. The area under the curve (AUC) was 0.83 which indicate high accuracy of the results and significant interest in using this biomarker to assess neonatal septicemia.

Klebsiella pneumoniae (34%) was the most common isolate reported in our study followed by Candida species(15%) and Enterobacter cloacae in 4 (12%) cases. Various studies reported similar findings, Klebsiella pneumoniae being the most common Gram negative isolate obtained from the blood culture.10 Some studies reported a different spectrum of micro-organisms responsible for neonatal sepsis. The variation can be explained by the fact due to diversity of micro-organisms from region to region.

In conclusion, C-Reactive protein has shown high performance in early diagnosis of neonatal sepsis. Its sensitivity, specificity, positive predictive value, negative predictive values of CRP were 90.6%, 86.5%, 42% and 99% respectively. Therefore, CRP can be used in resource poor settings where blood culture is not available or while waiting for blood culture results. Its usefulness as a negative predictor helps in discontinuation of empirical antibiotic therapy.

The limitations of this study were, we could not differentiate between early and late onset of neonatal sepsis. Secondly, we could not retrieve data of serial CRP assays. Lastly, CRP measurement was not compared with other parameters like PCT etc.

To conclude, despite CRP is a non- specific marker in inflammatory conditions, the relatively high sensitivity and specificity strengthens its use as an inflammatory marker of neonatal sepsis.