Mansabdar, Sambrani, and Kumar S: A study of rotavirus infection in acute diarrhoea in children less than 5 years of age

Background: Diarrhoeal diseases account for an estimated 1.5 million deaths globally every year making it the second leading cause of childhood mortality. In India 1 out of every 250 children die of rotavirus diarrhea each year.

Aim: To find out the incidence of rotavirus infection in acute diarrhoeal cases in children under 5 years of age.

Materials and Methods: A prospective study was conducted on 100 non repetetive stool samples of Children under 5 years of age, presenting with acute diarrhea and hospitalized in the pediatric ward, during December 2015 to November 2016. Stool samples were processed according to premier rotaclone enzyme immunoassay protocol for the detection of rotavirus antigen, adhering to standard laboratory precautions.

Results: The incidence of acute diarrhoeal diseases was 5.86% in our setting. Rotavirus was detected in 29% cases by ELISA method.

Conclusion: The rotavirus antigen detection by EIA is a reliable test, as it is quantitative and also has high sensitivity and specificity. Hence, can be routinely employed to prevent major morbidity and mortality among children, especially less than 5 years of age.

Diarrheal diseases account for majority of deaths globally making it the second leading cause of death in childhood.1 In India diarrhea accounts to 14% deaths in children less than 5 years of age.2

Diarrhea could be due to various causes like viruses, bacteria, protozoa and helminths. In developing countriesb50-60% cases are bacterial in origin were Escherichia coli amounts to 25%, Campylobacter jejuni 10-15%, Salmonella species 5%, Shigella species 5%, followed by 35% viral etiology, were rotavirus accounts for 15-25% and in many the cause is unidentified or mixed.3

Rotavirus infection is most common amongst the viral etiology leading to 20-30% hospitalized cases in India under 5 years age and estimated to cause approximately 5,27,000 deaths each year.5

Hence the present study was taken up for rapid diagnosis of rotaviral infections, to prevent the irrational use of antibiotic therapy and prolonged hospitalization.

The present study was a cross sectional, prospective study conducted at the department of Microbiology, from December 2015 to November 2016.

Stool samples from patients admitted in the paediatric ward of were received at Department of Microbiology.

Total of 100 cases were included in the study.

A detailed clinical history was taken, thorough clinical examination was done and duly recorded in the case record forms. An evaluation of degree of hydration was done as per WHO criteria.

Subsequently stool sample was sent to department of microbiology for ELISA for Rotavirus detection.

Solid phase sandwich type EIA. Plastic microtitre wells are coated with a monoclonal antibody directed against the product of the sixth viral gene (VP6), which is the group specific antigen for all known human rotaviruses.

This can be determined by adding 2 drops of stop solution (sulphuric acid) to each well.

The ethical clearance of the study has been obtained from the instituitional scientific committee.

A total of 100 cases of acute diarrhoea in children less than 5 years, who were admitted in paediatric department, KIMS Hospital, Hubballi, were studied during the December 2015 to December 2016.

The Table 2 shows that rural rotavirus positive cases are 65.5% when compared to urban population which shows 34.48%. 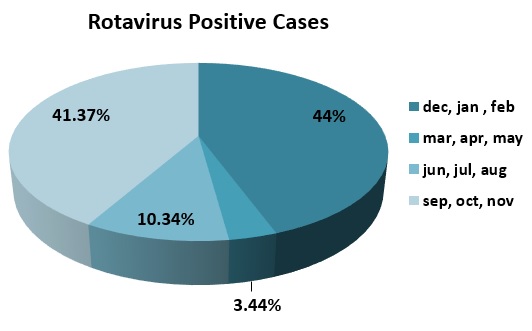 Above Table 2 that majority of the rotavirus positive cases were seen in the winter season which accounted to 85.37%, 10% in rainy season and 3.44% in summer season. 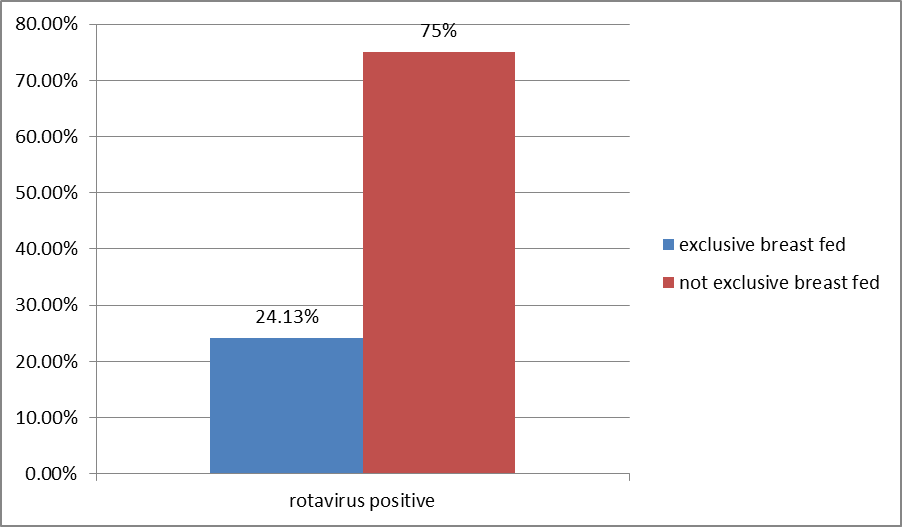 Above Table 2 that maximum number of cases (75%) shows rotavirus positive when the children lack exclusive breast feeding whereas 24.13% in children who were exclusively breast fed. 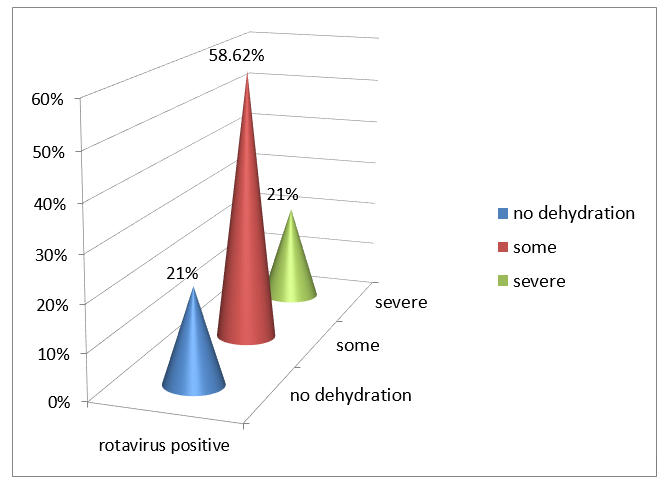 Above Table 5 that 70% cases were presenting with yellowish coloured stools, followed by 22% showing greenish stools and 8% with solid stools1showing macroscopic picture of greenish frothy stools with mucous flakes of rotavirus positive specimen: 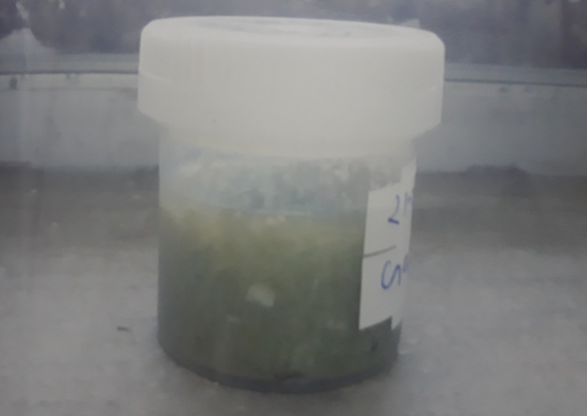 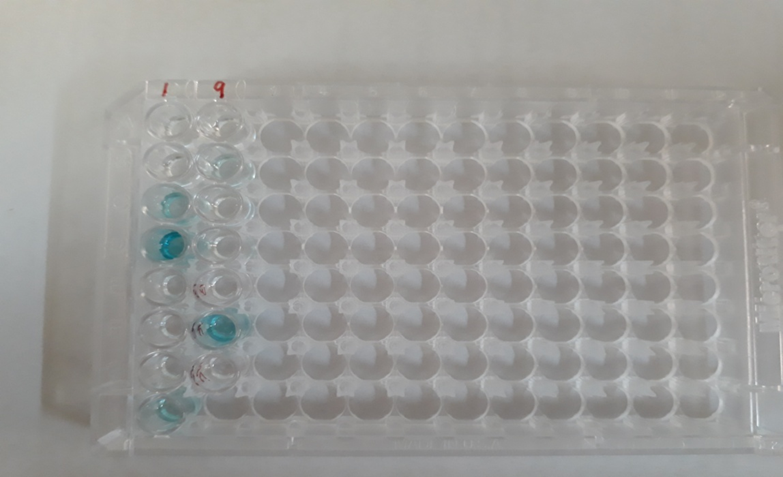 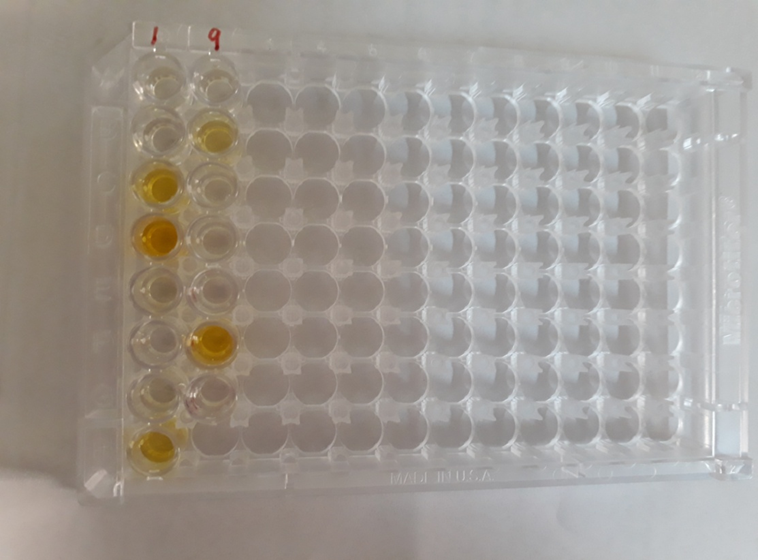 This study was conducted in the department of microbiology from December 2015- December 2016.

The total number of acute diarrhoeal cases admitted to paediatric ward during this period were 186 in accounting to prevalence rate of 5.86% in our set up.

Among them, 100 cases were included in the present study for acute diarrhoea which were within our inclusion criteria.

In the present study maximum rotavirus positive cases were seen in the age group of 6-12 months (55.17%), followed by 1-2 years(31%) and least were seen among less than 6 months and 2-5 years. Also rotavirus positive cases in males and females shows 62.06% and 37.93% respectively. Also in a study conducted by Satarupa Mullick et al 6 in 2014 most cases of ADD belonged to 6months to 2 years, followed by 0-6months of age. In another study done by Shaveta Dhiman et al 7 in 2015 at Amritsar maximum cases of ADD (69%) belonged to 6 months - 2 years of age. These findings were similar to the present study. Predominant number of cases in the age group of 6-12 months may be due to the commencement of weaning period, which leads to exposure to the water and other contaminants and also during this period infant starts toddling and acquire the habit of mouthing. 8

In the present study 88% cases were detected in the winter, 3.44% in summer and 10% during rainy season.

In a study conducted in southern Orissa from Jan 2007-Dec 2010 among children less than 5 years of age; higher prevalence of diarrhoea was noticed in July to October that is during monsoon period.22

A study conducted at Vietnam reported that rotavirus infection occuredall round the year, with a peak in winter season.25

A study demonstrated that the degree of sensitivity and specificity of LA test showed a roughly linear relationship with the degree of ELISA sensitivity and specificity, and the positive predictive value of the test was high.26 According to Raj et al, the LA kit studied was a specific and rapid method. While it may be useful in certain situations, such as in outbreaks, its low sensitivity can make it unsuitable for use in routine clinical practice.27

Incidence of rotavirus cases in and around Hubballi is 29% in children less than 5 years of age. The study shows that maximum rotavirus cases were seen in the age group of 6-24 months. As the samples collected were from unvaccinated children, it also relates the importance of vaccination which could prevent dehydration resulting from rotavirus infection.Also, a rapid diagnosis of these infections with EIA, may be valuable in the formulation of prognosis for children with acute diarrhoea and may prevent the irrational use of antibiotic therapy and prolonged hospitalization.

R Durmaz AT Kalaycioglu S Acar Z Bakkaloglu A Karagoz G Korukluoglu Prevalence of Rotavirus Genotypes in Children Younger than 5 years of age before the introduction of a Universal Rotavirus vaccination Program: Report of rotavirus Surviellance in TurkeyPLoS One2014912e113674